A Visit to Wisconsin’s Man Mound
By Jacob Riyeff
Spirituality 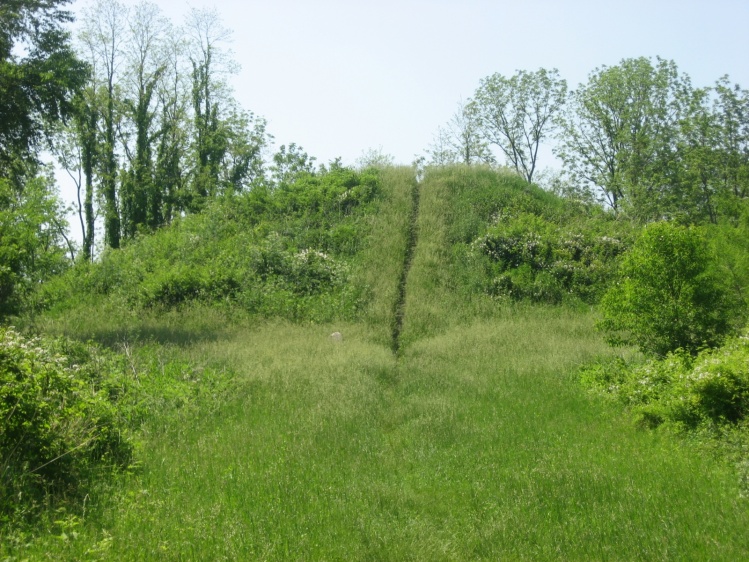 Under gray skies and gold leaves, I sit next to the two-hundred-foot figure laid out in a small park off Highway 33 in Sauk County, Wisconsin. My young sons giggle as they run up to his armpits, jogging up and down along his flanks. My daughter makes a sketch, trying with her six-year-old’s skill to capture the plant life growing around this millennium-old man. I write in my journal about “Man Mound,” the only remaining anthropomorphic effigy mound in North America. In his thousand-winter silence, he has become part of the landscape. When I write poems and when I pray, I notice how my imagination is shaped by the geological features that surround me here in the Upper Midwest: rivers and bluffs, glens and lakes and woods. And this man.

The Late Woodland peoples, the makers of Man Mound, lived in what is now Wisconsin from about 700–1200 AD (about the time between the deaths of St. Bede and St. Hildegard). They are distinguished by their elaborate cord-marked pottery, the cultivation of maize, and their numerous settlements. And they are unique in the kinds of mounds they built; while mounds for burial and other ceremonial purposes span a good deal of the continental United States, the effigy mounds (shaped like stylized animals or other figures) are largely concentrated in southern Wisconsin.

The Late Woodland peoples understood the interweaving of the natural landscape with the divine.
sharetweet

I first encountered the Late Woodland effigy mounds at Devil’s Lake, outside the town of Baraboo (of Ringling Brothers Circus fame), where my brother and I spent summers with my grandparents. There, amid the maples, oaks, and hickories that surround the glacial lake, a bird effigy guards the South Shore, while a bear and a water spirit skirt the North Shore; a lynx mound is perched atop the bluff. Several miles east-northeast of Devil’s Lake is Durward’s Glen, where a Catholic shrine is set in a ravine of sandstone bluffs. A statue of Mary, “The Guardian of the Glen,” watches over the glen’s mouth from her fern-lined perch on a protruding boulder, and a small chapel, “Our Lady of the Pines,” sits atop the knoll on the eastern cliff. Sandhill cranes, great blue herons, myriad wildflowers, stands of pine, and hundreds of frogs enliven the glen. The air between the looming cliffs feels different—a call to alertness, a sense of harmony.

Christians throughout our history have erected religious shrines within the natural spaces that evoke a special sense of the sacred; the Holy Cave of Saint Benedict at Subiaco and the holy wells of Cornwall come to mind. Some have worried about such confluences shading into “idolatry,” but I have never been anxious about finding times or places special in the face of an utterly transcendent God.

The Late Woodland peoples understood the interweaving of the natural landscape with the divine. Archaeologists and anthropologists believe that the mounds are meant to construct a complementary but tension-filled division between an Upper World (populated by birds) and a Lower World (populated by land animals, like deer and bears, and contrasted with water spirits). In this zoömorphic cosmology, birds predominate in higher areas, water spirits are generally closer to lakes and rivers, and land animals linger between these upper and lower regions. Tantalizingly, the few anthropomorphic mounds were set in valleys, away from features like ridges and bodies of water. They stand on their own.

These figures shape moraines and bluffs and waterways into a symbolic cosmos. The theories and explanations of experts are helpful, but they fall short of the experience of actually being there with these mounds that have weathered a thousand years. The lasting spiritual insight of the Late Woodland mound builders fits with my own Catholic sense of the holy that animates particular spaces, charging times and places with a heightened potential for peace, for integration, for rest and the sense of being awake in this world.

Nostra aetate, the Second Vatican Council's declaration on the relation of the church to non-Christian religions, insists that Christians ought to “recognize, preserve, and promote the good things, spiritual and moral” found among the followers of other religions. As I sit in the grass alongside Man Mound, I feel a great comingling of my life with the lives of those who walked this patch of our earth generations and generations ago. My ancestors were complicit in pushing the indigenous peoples off this land, but I find myself here now, hoping this wound can be healed. The earth-poem sculpted into the topsoil and turf of southern Wisconsin is a silent witness to the Spirit working in the hearts of humans, transforming the material phenomena around us into a potent realm of Upper and Lower Worlds, of a very physical world inhabited by spirits and myriad living creatures, all patiently getting ready for the final consummation.

Jacob Riyeff teaches in the English department at Marquette University. His books include In the Bosom of the Father, the first English translation of the Benedictine monk Swami Abhishiktananda’s collected poems, and his first poetry collection, Sunk in Your Shipwreck. Jacob is a Benedictine oblate and lives in Milwaukee, WI.