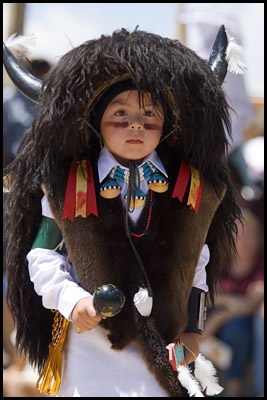 I participated in the Cathedral Ministries Conference last week. It was held in Santa Fe New Mexico. The liturgies were rich and beautiful, with excellent music and preaching and elements of local culture interwoven skillfully with the strong yet simple structure of the Roman Rite. Adults, children, and youth all exercised liturgical ministries with great presence that suggested they knew exactly what they were doing. One felt we were all engaged in something sacred—a common act of worship which unfolded through diverse roles.

I should not have been surprised, therefore, that in one of the liturgies a group from one of the Pueblos did a Sacred Buffalo Dance as a post-communion prayer of thanksgiving. Their ceremonial dress (buffalo hoods, eagle feathers, clothing of white and brightly colored cloth), the sounds of drum and chanting, plus the dance itself (marked by the rhythmic sound of bells worn by the dancers on bands around their waists, wrists and ankles; similar to the zils of a tambourine) made a deep impression on this Northeasterner, because they were – quite literally -- like something from another world.

Most impressive of all was the attitude of the dancers themselves: completely serious and focused, from the tiniest child (a small girl of about six years old) to the oldest adult. This wasn’t Hollywood or show time or even the folk festival. It was prayer and witness, an offering before God that we were invited to share as brothers and sisters in Christ.

Knowing how often and how brutally Native Americans have been betrayed over the centuries, I felt the shock of recognizing how, even now, this is the America most of us do not know or see. Yet here they are. And their worship is a gift of inestimable value before God, who is always near to those who call upon him.

My talk was on liturgy and social justice—how the liturgy calls us to justice, and how God calls us to worship him in a way not corrupted by favoritism. When I got home, I did a little web search about the buffalo dance and, alas, I soon discovered (some) Catholics sitting in judgment, sure that European liturgical forms are normative and indeed the only forms capable of bearing authentic worship of the Triune God. Fortunately, the Vatican II Constitution on the Sacred Liturgy (Sacrosanctum Concilium) takes a different view.

Even in the liturgy the Church does not wish to impose a rigid uniformity in matters which do not involve the faith or the good of the whole community. Rather does she respect and foster the qualities and talents of the various races and nations. Anything in these people’s way of life that is not indissolubly bound up with superstition or error she studies with sympathy, and, if possible, preserves intact. She sometimes even admits such things into the liturgy itself, provided they harmonize with its true and authentic spirit. (SC 37)

Here is the rub, however. It is not enough to pray with people, value their spiritual heritage within the sanctuary, and then walk away. This is tokenism. If we are serious about the worship of God, we must work for social justice outside the liturgy too. In fact, the liturgy commits us to it. A quote from Virgil Michel, OSB, an American pioneer of the Liturgical Movement of the early twentieth century, continues to inspire (and sometimes to haunt) me in this connection:

What the early Christians thus did at the altar of God, in the central act of Christian worship, they also lived out in their daily lives. They understood fully that the common action of worship was to be the inspiration of all their actions. They knew well that their common giving of themselves to God and to the brethren of Christ was in fact a solemn promise made to God that they would live their lives in this same love of God and of God’s children, their brethren in Christ, throughout all the day. Unless they did that, their action before God would be at best lip-service, a lie before God. (“The Cooperative Movement and the Liturgical Movement,” Orate Fratres Vol. XIV, Feb. 1940, p. 156)

I was a guest of the Church of Santa Fe this week. I came home to different people and different challenges. Yet the experience renews the question we all face in various ways: Who is the Body of Christ? How do we keep the “solemn promise” of our worship?