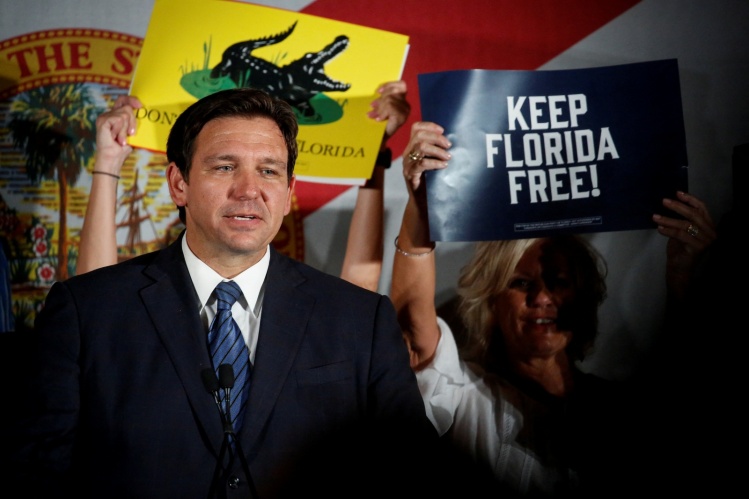 The only real question about the re-election of Florida Gov. Ron DeSantis on November 8 is just what his margin of victory will be. The stronger DeSantis’s showing against Democratic challenger Charlie Crist, the stronger his position to challenge a fellow Floridian for the 2024 Republican presidential nomination.

DeSantis seems to be on an unending political honeymoon, gaining ever greater national attention while triggering the libs and winning adulation from the fringe and mainstream precincts of the Right alike. Though his opponents despise him for seeming to wake up each day determined to be the biggest jerk possible, DeSantis remains broadly popular in Florida for keeping the economy going and schools largely open during the pandemic. His provocations annoy but they don’t cost him support, even among moderate Sunshine State voters.

Among his more egregious stunts was the late-summer transport of Venezuelan migrants from South Texas to Martha’s Vineyard. The move—at once cruel, cynical, and calculated—had nothing to do with Florida and everything to do with showing that he can exceed Trump-level nastiness in immigration rhetoric and policy. But DeSantis used funds appropriated by a budget Tallahassee Democrats voted for. And if his action is found to violate criminal law, he has sufficient degrees of separation to make underlings take the fall.

Florida Democrats lack anyone with the political talent (or shamelessness or gutter instincts) to push back forcefully against DeSantis, much less knock him down. The task has fallen occasionally to California Gov. Gavin Newsom, and occasionally to the Biden White House. But the most consequential, if less noticed, barbs come not from Sacramento or Washington but from Palm Beach. Donald Trump’s inner circle complains to the national media about DeSantis, while the former president himself considers the governor insufficiently grateful for Trump’s outsized role in elevating him from an underdog candidate in 2018 to a player on the national stage.

Florida Democrats lack anyone with the political talent (or shamelessness or gutter instincts) to push back forcefully against DeSantis.
sharetweet

In 2018, DeSantis ran ads in which he used his own children to prove his devotion to Trump. The spots featured DeSantis reading The Art of the Deal to one child and teaching another to say “build the wall” as they played with blocks. But since then, the governor has not prostrated himself before Trump the way other national Republicans have. After Hurricane Ian devastated southwest Florida in late September, whispers about DeSantis’s mishandling of pre-storm evacuation procedures came from inside Mar-a-Lago before Democrats or the news media began to ask whether the governor should or could have done more.

But this only clarifies and reinforces DeSantis’s political strength. While Crist briefly paused campaign activities after the storm, DeSantis enjoyed several news cycles being portrayed as a decisive, competent leader. He even served relief workers hash browns at a local Waffle House. And just when Democrats began to question publicly whether DeSantis should have evacuated more people out of Charlotte and Lee Counties before the storm, Biden arrived in Florida and promptly praised DeSantis for his crisis management, undercutting the line of attack Democrats had unwisely chosen. In covering DeSantis’s make-nice with Biden, the media depicted him as a capable leader putting political differences aside in the wake of a natural disaster. DeSantis is a shrewd politician largely unconstrained by norms and ethics, and the distinction between campaigning and governing is almost always barely perceptible with him. Yet in his brightest national spotlight to date, he seemed statesmanlike alongside the president while Democrats’ attacks floundered even more than usual.

DeSantis’s daily routine generally involves picking fights with journalists in what he calls the “corporate media” or “regime media”; traveling around Florida cheering the disbursement of state and federal money regardless of whether he and Republicans supported its appropriation or not; and sending out email fundraising appeals hoping to monetize the latest outrage and pad his nine-figure campaign war chest with small-dollar contributions from angry Republicans all over the country.

DeSantis is a shrewd politician largely unconstrained by norms and ethics, and the distinction between campaigning and governing is almost always barely perceptible with him.
sharetweet

Then there are moments when DeSantis can turn his political skills against the man who made him. Such was the case when he keynoted the conservative conference circuit’s Florida stops, where crowds seemed uncertain about which Florida man they had come to pay homage to. Such was the case in February at the Conservative Political Action Conference in Orlando and in September at the National Conservatism conference in Miami. The audiences were obviously grateful to Trump, but they practically worshiped DeSantis, whom they consider to be like Trump, only better: more disciplined, less baggage, younger, smarter, better family life by far, no criminal investigations, etc.

And as some GOP candidates—all ebullient Trump disciples in their primaries—have kept the former president at a distance in their general-election campaigns, DeSantis received rock-star treatment at his fly-in rallies for Republican aspirants in Arizona, Nevada, Ohio, and Pennsylvania. He champions candidates who repeat Trump’s lies about the 2020 election while never saying whether he thinks it was stolen. Billionaire GOP donors throw money at DeSantis, as Trump subsists on PACs that end up paying his massive legal bills. While DeSantis is not a polished rhetorician or public speaker, his speeches are nonetheless clear and straightforward—a cross between a résumé and a high-school essay about the evils of the Left—while Trump’s are more like delusional rants and televangelist altar calls. And Trump’s tactics with respect to DeSantis fail to land much of a punch, let alone draw blood. Trump often complains that DeSantis copies his hand gestures, an undeniable accusation, but also petty. Late last year, Trump called the governor “gutless” for refusing to admit he got the vaccine booster as his wife, Casey, was receiving chemotherapy treatments at a cancer center during a Covid surge.

Still, it remains likely that Trump will make the first official moves toward a 2024 presidential run. He even teased the idea of making his campaign announcement in Tallahassee. DeSantis has downplayed presidential speculation, only declining to say he will not run if Trump does. If Trump did not run for some reason (criminal conviction, death), DeSantis would be poised to clear the field of Trump’s more desperate imitators and hangers-on. But if the former president does run, as expected, DeSantis stands squarely in the way of a GOP coronation of Trump. DeSantis could also wait for Trump to stumble, or for his legal problems to mount, or for health and aging issues to sideline the former president, who will turn seventy-seven next June and would be seventy-eight if elected again. (Biden was seventy-seven when elected in 2020.) DeSantis also has time on his side: He would barely be fifty if he waited until 2028.

But as Republicans and the media continue to call attention to DeSantis’s degrees from Yale and Harvard, a beautiful wife who beat cancer, cute young kids who are not spoiled and corrupt, and all the lib-triggering provocations that meet or exceed what Trump has said and done, Trump’s envy will grow and even his most ardent supporters may find DeSantis a more attractive option. And then national Democrats will get the opponent they might least like to face.

Jacob Lupfer is a political strategist and writer in Jacksonville, Florida.