When it comes to cashing in on Pope Francis Fever, Rolling Stone has one-upped Esquire, with its silly "best-dressed man" designation. They didn't even have to make a joke, like the New Yorker, when they made Francis their cover model. The Rolling Stone cover is essentially a joke come to life: Francis, the Rock Star Pope.

The article, though, is no joke. I've seen some dismissive sniffing and some references to "hate-reading" among fellow pope-watchers, but Mark Binelli's piece is not the superficial profile you might be expecting. In fact, there's a lot to admire in it.

Its main flaw, and I will grant Fr. Lombardi this, is its over-the-top dismissal of Pope Benedict, and its occasional resort to what Lombardi aptly called "crudeness." He said "surprising crudeness," but given the venue, there's no surprise; crudeness is an essential element of serious journalism in Rolling Stone, a kind of self-conscious tic, like the gratuitous shots of topless women in HBO's prestige dramas. Hence, this, a few paragraphs in:

After the disastrous papacy of Benedict, a staunch traditionalist who looked like he should be wearing a striped shirt with knife-fingered gloves and menacing teenagers in their nightmares, Francis' basic mastery of skills like smiling in public seemed a small miracle to the average Catholic.

It's too much to say that Benedict's papacy was "disastrous," and the comparison to Freddy Kreuger is not only disrespectful (as intended) but awkward, strained, and inapt. (And oddly dated, for a magazine whose mandate is keeping up with pop culture.) That's not at all what Benedict looks like. Which is too bad, because Binelli is right that Benedict's looks were a liability: in photos he inevitably looked grim and ghoulish, although in person, or on video, I was surprised to find he came off as gentle and shy. ("His voice is disarmingly gentle," Binelli says about Francis -- I wonder if he knows that Benedict's is, too, German accent notwithstanding.)

Still, underneath all the shock-value stuff, I think Binelli has a solid grasp of what the "Francis Effect" is all about. Strip the nonsense out of the above quotation, and you get: "After Benedict, Francis' basic mastery of skills like smiling in public seemed a small miracle to the average Catholic." Exactly right. As is this:

It's a funny thing, papal celebrity. As the archbishop of Buenos Aires, Bergoglio had never been an especially gifted public speaker. But now that he's Pope Francis, his recognizable humanity comes off as positively revolutionary. Against the absurd, impossibly baroque backdrop of the Vatican, a world still run like a medieval court, Francis' election represents what his friend Elisabetta Piqué, an Argentine journalist who has known him for a decade, calls "a scandal of normality."

If adolescent crudeness is Rolling Stone's major weakness when it comes to serious journalism, its major strength may be getting the usual suspects to loosen up and drop their guard in on-the-record interviews. (Ask Stanley McChrystal about that.) Thus, the quotes Dominic Preziosi pulled out in his earlier post.

In the comments on that post, Rita Ferrone says, "There are a number of individuals whose zeal for the honor of the previous pope is meant precisely as a rebuke to the current occupant of the office. They are very happy to announce criticism of anyone who says too openly that Pope Francis is a welcome change after Pope Benedict." Yes. Francis's charisma and broad appeal, and the notable contrast with Benedict's image, is a fact, like it or not. And if you read a piece like this too defensively, you'll end up misreading it entirely. For example, at the Register, Edward Pentin complains: "[Binelli] also describes Benedict’s acclaimed apostolic exhortation Sacramentum Caritatis as 'wonky' but without explaining further." What further explanation was he looking for? Does he know what "wonky" means? Here's a quote from that document: "The causal influence of the Eucharist at the Church's origins definitively discloses both the chronological and ontological priority of the fact that it was Christ who loved us 'first.'" Theological sophistication and erudition -- wonkiness -- is what Benedict tended to be acclaimed for.

A lot of the stuff that should have been struck from Binelli's article feels, to me, like it was added during the editing process instead. If you read on, his reporting and analysis undoes most of the over-the-top claims he makes -- after that "disastrous papacy" bit, he runs through a colorful list of historically bad popes and concludes, "Benedict XVI would certainly not merit inclusion in this rogues' gallery." He also says,

After he became Pope Benedict in 2005, Ratzinger couldn't seem to catch a break, and he certainly lacked the ability to apply his widely acknowledged brilliance as an academic to snuffing out fires in the real world.

Which is, or ought to be, a pretty uncontroversial description of the Benedict papacy.

The one part of Binelli's piece that really felt fresh to me was his analysis of how conservatives and liberals have responded to Pope Francis, and his description of the context of the "Who am I to judge?" remark.

...his answer is never really translated properly. What he actually says is, "Mah, who am I to judge?" In Italian, mah is an interjection with no exact English parallel, sort of the verbal equivalent of an emphatic shrug. My dad's use of mah most often precedes his resignedly pouring another splash of grappa into his coffee. The closest translation I can come up with is "Look, who the hell knows?" If you watch the video, Francis even pinches his fingers together for extra Italian emphasis. Then he flashes a knowing smirk.

The cover alone is a reason to pick up Rolling Stone -- keep it as a memento of the heady Pope Francis honeymoon period. But the article is worth reading, too, and worth arguing with. It's too substantial to dismiss out of hand.

Marc Thiessen and the Catechism 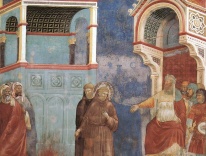 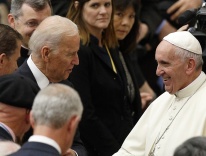