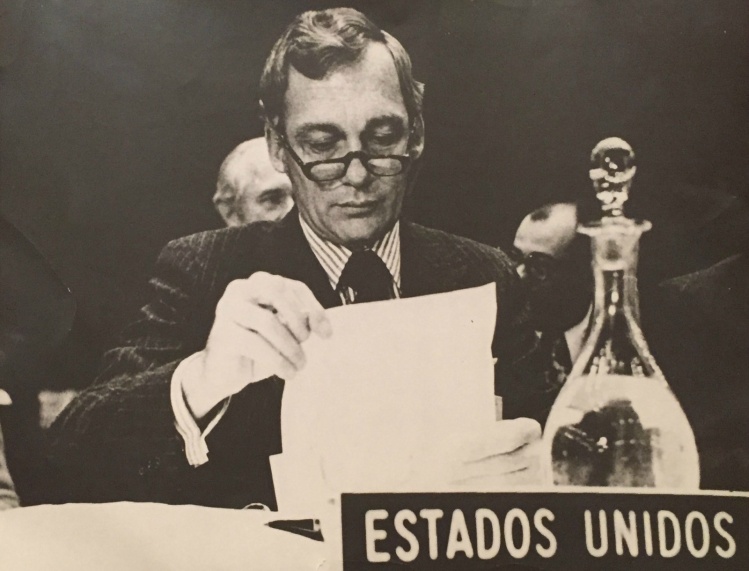 Robert White, who spent a quarter century in the U.S. Foreign Service and was ambassador to El Salvador at the beginning of its civil war, seems never to have forgotten anything. Among the things he never forgot were the murders of Jean Donovan and Sisters Dorothy Kazel, Maura Clarke, and Ita Ford. White was present when their bodies were recovered from shallow graves on December 4, 1980.  He returned to the embassy as angry as his wife, MaryAnne, had ever seen him. It changed him, she told me in 2001, when I interviewed her for a profile of Bob I wrote for Commonweal. Indeed, his refusal to cover up Salvadoran military involvement in their murders—and those of thousands of Salvadorans, including Archbishop Oscar Romero—led to his resignation from the Foreign Service in 1981. He continued his work for democratic reforms and human rights in the Caribbean and Latin America at the Carnegie Endowment for Peace and the Center for International Policy.
Bob, who died on January 13 at the age of eighty-eight, was a great interview; in 2001 I left his Washington office with tapes full of details. He could summon conversations from years past and recount policy details lost in the fog of diplomatic maneuvering. Not only did he remember names and details of long-past events, he was also forthcoming in his analysis of U.S. foreign policy. He had joined the Foreign Service in 1955; after President John Kennedy announced the “Alliance for Progress,” he requested assignment in Latin America. Designed to encourage democracy and human rights, the new policy was a turn away from, as White put it, doing the work of “the colonial office.” That derogatory title summed up the tangled political and economic relationship between the U.S. and its neighbors to the South. Even when support in Washington faltered after Kennedy’s assassination, White tried to keep the policies of the Alliance in play. Full-blown Cold War policies had returned in 1968 with Richard Nixon and Henry Kissinger, coloring White’s years in Honduras, Nicaragua, Columbia, Paraguay, and El Salvador. While serving as U.S. representative to the Organization of American States, he faced down Kissinger, whose statements supporting Pinochet were contrary to U.S. policy. This brought White to the edge of dismissal; he won the battle and stayed on to serve in his final post, El Salvador.
A long history of interventions and exploitation of the continent’s natural resources made the United States the imperial power that both democratic reformers and Marxists loved to hate. White saw in the reformers the path to more democratic governments and respect for human rights. Washington, focused on Soviet threats and Fidel Castro’s support for guerrillas, increasingly favored the dictators and caudillos. Secret agreements were struck between U.S. military and intelligence agencies and their Latin counterparts. This often put the Department of State, though the official representative of the United States, on the margins of both policy and practices. Jimmy Carter’s victory in 1976 pressed U.S. policy once again into a human rights agenda; that ended with Ronald Reagan’s election in 1980.
White had long found himself the middleman in many of the struggles between Latin American governments and reformers as well as with his own government. His job was to work with each country’s political leaders, notwithstanding their anti-democratic policies. While they might tolerate his cajoling and plain speaking about land reform, fair elections, and human rights, they usually had a U.S. military representative or CIA agent to turn to for direct contact with Washington (often someone on the ambassador’s own embassy staff). At the same time, White made it his business to seek out and get to know sympathetic academics, journalists, labor leaders, clergy, and reformers in the Christian Democratic tradition. He understood the central role the Catholic Church, especially its cardinals and bishops, played among the social and political elites. His friendship with some and parrying with others gave him behind-the-scenes influence; his attendance at Mass could be the occasion for a pointed homily on topics a prelate might otherwise avoid. If White was regarded with suspicion and contempt, especially by Salvadoran politicians and military, his reputation among Americans (and American Catholics) opposed to their endemic violence and abuse was hardly better. The U.S. ambassador was seen to be compromised by his position and not to be trusted.
After his resignation, White more than any U.S. official exposed the hidden ties between U.S. military and intelligence and their Latin American counterparts. He testified against Salvadoran military for their complicity in torture and murder, especially of the American churchwomen. He never ceased pressing for better political and economic conditions in Latin America, termination of sanctions against Cuba, and an end to human rights abuses not only by dictatorships but also by democracies. Bob’s work as an ambassador—from the United States at its best—never really ended.
Published in the February 20, 2015 issue:
View Contents
Tags
U.S. Catholicism
Foreign Affairs
Latin America
Social Justice
War and Peace