Ready for the Worst

‘The 21: A Journey into the Land of Coptic Martyrs’
By Daniel Philpott
Muslim-Christian Relations
Nonfiction
Secularism and Modernity
Spirituality 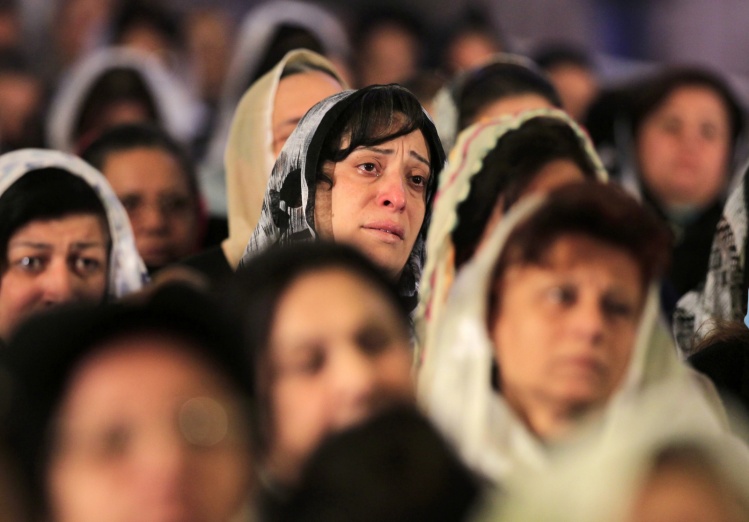 Coptic Christian women attend a Feb. 17 service in Cairo for the Egyptians said to have been beheaded in Libya. A video released on social media Feb. 15 is said to show the beheadings. (CNS photo/Mohamed Abd El Ghany, Reuters)

It is only natural that a journalist would jump at the chance to tell the story behind the colorful, choreographed, and utterly gruesome video showing militants of the Islamic State (or ISIS) beheading twenty-one Christian migrant workers on a beach in Sirte, Libya, on February 15, 2015. The militants posted the video on YouTube and lodged its images in the memory of millions of people—millions of potential readers.

An ambitious author could easily situate the episode in a familiar storyline pitched to appeal to Westerners alarmed by the rise of Islamic terrorism. The militants were Muslim, members of an outfit that has committed terrorist attacks in several major U.S. and European cities and was at war with the United States and its allies in Iraq and Syria until quite recently. They entitled their video, “a message signed with blood to the nation of the cross,” a clear call to arms against Christians. So, we have a ready-to-tell story about a violent religion, Islam, attacking Christians, all but one of them Egyptian Copts, who are in turn supported by a regime that is allied with the West.

Were it published, such a story would predictably meet with criticism that it overgeneralizes about Islam, risks stoking conflict through its binary, polarizing narrative, and plays into the hands of dictators like Egypt’s President Abdel Fattah al-Sisi, who has built his rule upon countering violent Islamist extremism. The author would thus join and fuel a debate that has been going on in the West since the attacks of September 11, 2001. And he or she would likely sell lots of books.

This is not the book that the German writer Martin Mosebach chose to write. He abjures facile storylines and declines to consider the “garish bouquet of hypotheses” that purport to explain the murders and depict their consequences. Nor is this book a work of journalism. While Mosebach does report facts he learned firsthand, his account reads more like the diary of a pilgrimage or perhaps an entry in a martyrology. Even the table of contents is iconic, listing twenty-one chapters, corresponding to the number of martyrs. And each chapter begins with the name and photograph of one of the twenty-one. This focus on the slain, not on the slayings, is what makes Mosebach’s account startlingly innovative.

Who were these martyrs? How did their Christian faith shape their response to their forthcoming martyrdom? These are Mosebach’s questions. But why even assume that their faith shaped their response? Their murderers selected them, after all, merely because they were (except for one) Egyptian Christians, not because they were particularly saintly. Any Egyptian Christian would have done. Mosebach claims, though, that their faith was strong and unwavering, and devotes most of the book to convincing us of this. He spots one of his first clues in the video, whose producers were keen to display the Christians’ faces but surely did not intend to reveal that they were praying, audibly professing their faith in Jesus Christ, and in many instances displaying a look of calm. How did these men—“unremarkable farmers” who had migrated to Libya to find work—succeed in stamping this viral video with a message very different from the one intended by their executioners? Mosebach travels to the village of El-Aour, Egypt, the home of most of the martyrs, in order to find out.

El-Aour is very poor. Villagers live in houses of concrete and exposed rebar, with whole rooms devoted to animals. Heaps of rotting trash are scattered about the village. But here too Mosebach fastidiously avoids predictable and condescending narratives. Over the past couple of centuries, but especially in the mid-twentieth, the prevailing understanding of religion in the university and among Western elites has been the secularization thesis, which holds that religion is irrational, primitive, and destined for extinction. The poor, in this narrative, turn to religion as a salve for their hard lives and because they are too ignorant to know better. Once economic development brings them education, health care, a long life, and bourgeois comforts, they will forget about God. A recent statement of this thesis is the 2011 book Sacred and Secular: Religion and Politics Worldwide, where political scientists Pippa Norris and Ronald Inglehart offer global evidence that when people achieve material security they become less religious.

In this remarkable book, Mosebach doesn’t simply avoid the standard Western narratives but turns the tables on them.
sharetweet

Evidence that the poor are more religious, though, does not necessarily demonstrate that religion is an irrational anachronism. Perhaps the poor possess a profounder faith because their circumstances force them to recognize their fragility and dependence. After all, in the gospels, the poor—the blind beggar, the widow offering her mite—find it easier to follow Jesus than the rich do. Historian Philip Jenkins arrives at a similar insight in his important book The Next Christendom, which documents the shift of Christian populations and vitality to the Global South, where people enjoy far less wealth and security than in the Global North, but where faith is far more alive with a sense of the supernatural—healings, miracles, exorcisms, and movements of the Spirit. In the same vein, Mosebach comments:

We have become accustomed to assuming that it is primarily political and economic motives that lie behind every religious conflict, because we don’t want to consider the fact that a person’s faith might actually be the ultimate, highest reality. But for these twenty-one Coptic peasants and migrant workers, that is precisely what their religion was. . . .  They were well aware of the disadvantages associated with being a Christian in Egypt. But these people who superficially seemed so weak, who eked out such a meager existence, were willing to accept these disadvantages. . . .  Life itself, without faith, would have been worthless to them.

Refreshingly, Mosebach is open to understanding his subjects’ religion on their own terms.

It is a close-to-the-surface faith that Mosebach discovers in his visits to the martyrs’ families in El-Aour. He learns that their first response to the death of their fathers and husbands was not to call for revenge or to demand government action but rather to enshrine them as martyrs. They recounted to him that joy mitigated their grief when they first saw the video of the beheadings, not only because it brought an end to their uncertainty about their loved ones’ fate, but also because “we now have a martyr in heaven and must rejoice,” as Mosebach quotes them saying. They constructed shrines in their homes, gathered relics, composed hymns, and created prints of the deceased wearing crowns. With money from the government and the full support of their bishop, they constructed a vast pilgrimage church to which the martyrs’ bodies were returned and could be venerated by visitors. They attributed miracles to the martyrs’ intercession, including, most dramatically, the appearance of drops of oil on the blown-up passport photo of one of the martyrs, Mina, on two successive anniversaries of his death—similar to the drops that have appeared on the grave of his patron saint, Menas, a Coptic Christian from the early centuries of the church.

The families in El-Aour tell Mosebach that long before their loved ones were murdered on the beach, their lives were marked with prayer, devotion, Bible memorization, experiences of miracles, and even premonitions of their martyrdom. It was during the forty-three days of captivity prior to their beheading that they proved themselves to be something more than passive victims of persecution. Tortured during the day, they prayed and sang at night. Offered freedom on the condition that they repeat the Muslim creed, they refused. Matthew, the one worker from Ghana, was asked by his captors if he, too, was a Christian. He replied that he was. How do we know this? Because one of the captors, moved by the captives’ faith, later became a Christian and phoned the martyrs’ families to tell them what he had witnessed.

Mosebach anticipates the reader’s skepticism. How do we know that the workers did not brawl, party, and chase girls in their youth in El-Aour? He admits that he did not press such questions: “I’m not much of a reporter. Professional journalists enjoy a lack of restraint I find hard to muster.... What more could prying inquiries produce, anyway? The beheaded men’s new presence as saints and miracle workers was more important to these families than anything in the past.”

Mosebach acknowledges further that “accounts of people proclaiming ‘I am a Christian’ when they know the consequences will be death have a fairytale-like ring to our contemporary ears.” He continues, “one might be tempted to say that it is impossible for anyone to think that way today, had Matthew’s blood not flowed from his throat into the sea at Sirte.” But Matthew’s blood did flow; this is no fairy tale.

What convinces Mosebach that the faith of his subjects is genuine—both before and after their capture—is, above all, liturgy.  The liturgy “alone constituted the most important mental and aesthetic influence” on the twenty-one Coptic martyrs, he says. They can “certainly be called homines liturgi, men of the liturgy, which in the Western world is now a very rare mode of being human.” Mosebach depicts the Coptic rite in detail. The readings, he points out, are drawn not only from Scripture but also from the Coptic martyrology and chronicle of the saints, thereby connecting the congregation with their church’s long history of suffering, dating back to the Diocletian Persecution. He describes the consecration of the Eucharist—not just a brief moment, as it is in the Roman Catholic Mass, but rather a drawn-out exchange in which the priest emphatically proclaims the mystery and the members of the congregation emphatically affirm it. For the Coptic Church, the liturgy shapes all other aspects of the Christian life, such as service to the poor and, not least, martyrdom.

In this remarkable book, Mosebach doesn’t simply avoid the standard Western narratives but turns the tables on them. He is not interested in providing a lurid account of barbarities from which we, in our secular sophistication, are immune, or in explaining away the miracles in the lives of the devout poor, or, still less, in telling us how to regard radical Islam, formulate a foreign policy for the Middle East, or help persecuted Christians abroad, much as they could use our help. Rather, he wants to show Christians—in the West and elsewhere—what these migrant workers from Egypt (and Ghana) can teach us about living our own faith.

The 21: A Journey into the Land of Coptic Martyrs
Martin Mosebach
Plough Publishing House, $26, 272 pp.

Daniel Philpott is a professor of political science at the University of Notre Dame. He is co-director of the project Under Caesar’s Sword: Christian Response to Persecution, and author of the newly published Islam and Religious Freedom: The Fate of a Universal Human Right in the Muslim World Today (Oxford).