The virtuous paucity of 1970s Korean Catholicism
By James Baker 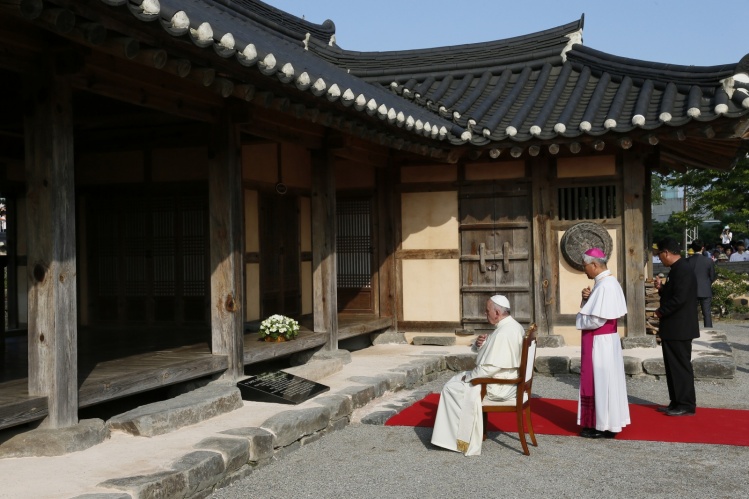 [This article first appeared in the September 2nd, 1977 issue of Commonweal]

As a fascinated outsider, I never cease to be amazed by the divergent, paradoxical extremes of Roman Catholic faith and practice. I see in the Church the most absurd and the most logically consistent of theological assertions, the most provincial and the most cosmopolitan of social values, the most disgraceful and the most heroic of human acts. The Church reflects the human condition, with all its tragedy and glory, more clearly than any institution on earth.

Nowhere in the world today are Catholics a more creative, Christ-like minority than in the Republic of Korea. They are in fact among the leaders of the opposition to violations of human rights and the abolition of democratic institutions here.

Americans are growing more and more familiar with the recent pattern of political events in South Korea, events certainly influencing Jimmy Carter's determination to reduce the American military presence in a nation where our higher ideals are no longer represented. They are not yet familiar with the Catholic response to those events.

The first shaky stab at democracy in Korea, conducted by the "Liberal" regime of Syngman Rhee, was so beset with corruption that it had lost the support of most South Koreans long before it was finally toppled by a student-inspired revolution in 1960. A year later, amid the chaos of a people's government, a military junta suspended civil liberties and set up a dictatorship. As "civilians" this group of officers saw to its own election in 1963 and has ruled as Korea's "legitimate" government ever since. Led by Park Chung-hee, the regime has since the early '70s phased out most of the early post-war democracy and at present rules by a series of emergency decrees under which any criticism of its administration is immediately and severely quashed.

Responding to these decrees, and to the arrests that followed them, a coalition of Christians and assorted liberals gathered in Seoul's Myong-dong Catholic Cathedral late in 1976. There they read a "Resolution for Democracy" calling for the resignation of the Park government and the restoration of human rights. Eighteen of the meeting's leaders were arrested and later found guilty of treason. Those not sent to prison were stripped of all rights, even the right to pursue their careers. A prayer meeting held for the convicts resulted in the arrest of two more Catholic priests.

Korean Catholicism's willingness to provoke rather than support the Powers-That-Be can be explained by their roots.

Catholicism was brought to Korea by one Yi Sunghun, a Korean emissary to Peking, in the late eighteenth century. Baptized by a Chinese bishop, he returned home to conduct services in private homes. By the early 1800's the movement was large enough to call for missionaries, and French Jesuits began slipping into the Hermit Kingdom.

Their work was not a bed of pear blossoms. They had to sneak into the country disguised as mourners or hidden away in dee baskets. When discovered they were often executed. Despite steady growth--to an estimated 15,000 by the 1870's--the Catholic population was constantly pruned by regular, periodic bloodlettings.

Today on a huge rock overlooking the Han River in Seoul, on the spot where missionaries first touched Korean soil and where hundreds of Catholics were killed, stands a Shrine of Martyrs. Inside, juxtaposed, are relics of early Catholics killed for their faith and the instruments of torture that helped speed them on their way. In the courtyard stands the statue of Kim Tae-gun (Andrew Kim), the first Korean to be ordained a priest. Having studied in Macau and been ordained in 1845, he was executed the following year for requesting French intervention to protect Catholics during the widespread persecutions of 1846.

The last of several major massacres occurred in 1866, only a decade before Korea was forcibly opened to diplomats of all nations and missionaries of all persuasions. During the past hundred years of royal decline, Japanese military dictatorship, and democratic experimentation, Catholics in South Korea have grown to 1,052,691, with 3921 clergymen serving 2265 parishes. Yet they are still a distinct minority, three percent of the population, one-fourth the number of Protestants, one-tenth the number of Buddhists. And they still retain their old lean, tough intensity, their sense of minority and empathy with the other despised elements of Korean society.

The Park regime, comfortably elected in carefully managed campaigns in 1963 and 1967, has since its narrow victory in 1971 grown increasingly hard for post-Vatican II Catholics, especially those with a history of being outsiders, to leave alone. Legally-questionable constitutional amendments and oppressive emergency decrees--all unchallenged by the Nixon-Kissinger- Ford administration -- have created a stable, economically- productive society in which no one can walk the streets after midnight, school children learn first to stand in straight lines and bend to authority, and anyone who dares criticize the government in any way is sent to prison.

It is the kind of situation that brings out the best in Catholic minorities. It also produces saints. One young Korean who may well be on his way there is the poet Kim Chi-ha.

Kim Chi-ha personifies the struggle of the Church in Korea today. A graduate of Korea's prestigious Seoul National University, where only the top students can enroll and a degree usually means success in a career, he gained early recognition as one of Asia's most promising Catholic poets and playwrights. In the atmosphere of disillusionment brought on by the political events of the '70s, his poetry and drama turned ever more satirical. He poked fun at everyone and everything, even the leaders of government and their poses.

He was arrested, along with a large body of other dissident religious leaders, professors and students, in 1974. In 1975 he was released, when others were pardoned, but three months later he was rearrested and charged with writing pro-Communist literature. The "proof" of his guilt were notes he had made for a play in which one character would defend Marxism before being proven wrong. Under pressure and torture, Kim Chi-ha was forced to confess to Communist sympathies and imprisoned at solitary confinement in Seoul Prison without hope of pardon.

Recently he was able to smuggle a "Declaration of Conscience" out of his cell. In this remarkable document he apologizes for his "confession" and tries to set the record straight. Excerpts from it amply demonstrate the Catholic witness in Korea today:

On Catholicism: "The reason I became a Catholic is that Catholicism presented to me as a universal message not only the thought that spiritual and material burdens could all be overcome, but that oppression itself could be exterminated by the simultaneous salvation of both the oppressor and the oppressed."

On Democracy: "What is democracy? It is the thought that opposes silence. It is the system that values the free logos, the free word." "What I demand and fight to win is absolute democracy -- nothing more and nothing less." "I am a Catholic, I am one of the oppressed Korean masses, I am a young person who hates from the depth of his soul privilege, corruption, and dictatorial powers."

On Korea: " . . . in the conditions and climate of a country pregnant with contradictions like South Korea, the persistent resistance and the popular tradition of revolution is precisely the material out of which a new principle of human liberation, the principle of the unity of God and revolution, can be moulded."

This letter from prison, standing beside similar statements by Saint Paul, John Bunyan and Martin Luther King, proves once again that under adverse conditions the Church's vision grows clearer and its voice stronger. We all of course hope that individual suffering and political oppression will soon end in Korea. But we should wish on Korean Catholicism no great numerical or social success--and certainly no Korean Constantine. Better that it remain small and despised and prophetic.