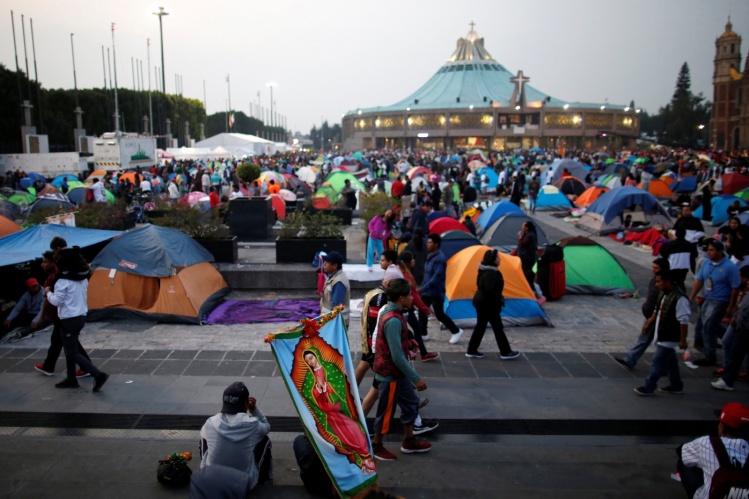 Pilgrims walk amid tents at a makeshift campsite outside the Basilica of Our Lady of Guadalupe, Mexico City, December 11, 2018 (CNS/Carlos Jasso, Reuters).

Every summer up through my teenage years my family would take trips to Mexico. While there we’d make one- or multi-day pilgrimages to various Catholic holy sites: the Basilica of Nuestra Señora de San Juan de los Lagos (Our Lady of Saint John of the Lakes) near Guadalajara, Jalisco; the Sanctuary of the Santo Niño de Atocha (Holy Infant of Atocha) in Plateros, Zacatecas; and, of course, the Basilica of Nuestra Señora de Guadalupe in Mexico City. We were on a mission. My parents had made a manda, a promise, to carry out these visits in thanksgiving for prayers answered by Our Lady, the infant Jesus, or various saints.

At every location there were crowded outdoor markets. The enticing smell of street food filled the air. And there were the faithful entering into the places of worship, some walking, some on their knees, in pain and in prayer—a profound humbling before the divine. We’d go inside too, pray, and then exit through rooms filled with photographs, drawings, letters, children’s toys, crutches, and other offerings made in thanks for the miracles the pilgrims experienced. This communal experience of the pilgrimage and the offering of oneself to God were fully a part of the popular Catholicism I grew up with, as was the possibility of daily miracles.

I especially looked forward to visiting Our Lady of San Juan de los Lagos, which was only an hour’s drive from the city of Aguascalientes, my parents’ hometown. Our Lady of San Juan was always present to us back home in California, but like an elder member of the family, she was also someone who we needed to visit, to pay our respects to, and to thank for how she had helped us throughout the year. To end the visit we’d always stop for the famous traditional cajeta—a confection similar to dulce de leche served in a container with the image of Our Lady printed on it—sold by the vendors surrounding the basilica. Enjoying the cajeta after the pilgrimage was like an extended reminder of the sweetness of Our Lady.

There was no doubt in her mind that her prayer had been answered the moment she made it.
sharetweet

In the hierarchy of divine promises, mandas seemed to be a level up from Lenten promises, since they were made only under the most important or dire circumstances. During my last two years as an undergrad at UCLA, I decided to commute from my parents’ home, in Rialto. The thought of me commuting for two years was such a source of worry for my mother that she entrusted my safety to Our Lady of Guadalupe and promised to bring me to her in Mexico City after my graduation. She made plans almost immediately, because there was no doubt in her mind that her prayer had been answered the moment she made it. Two years later, we were there. So many pilgrims make the visit that a moving walkway was installed underneath the tilma bearing the famous image of Our Lady to keep the crowds moving. As we stepped onto it, my mother urgently grabbed me and placed me in front of her and the rest of the group we were with, holding me as if I were a communion wafer. I was the offering.

On Friday, the Solemnity of the Annunciation, Pope Francis carried out a solemn Act of Consecration of humanity, and of Russia and Ukraine in particular, to the Immaculate Heart of Mary. He was entrusting all of us to her and simultaneously presenting us as a humble and broken offering. In today’s Gospel reading (cycle C), we hear the story of the prodigal son. He is humbled and broken as he makes his pilgrimage back to the creator, not knowing that the divine is already prepared to embrace and celebrate his return. After our family pilgrimages, my parents felt a sense of relief at having fulfilled their promise to return to these places of worship, and as a family we felt touched by the tender presence of God. This is just the outcome the prodigal son hopes for. On his journey home he acknowledges the sins he’ll confess to his father. “Father, I have sinned against heaven and against you. I no longer deserve to be called your son; treat me as you would treat one of your hired workers” (Luke 15:18-19). In seeking to return to the kingdom we, like the prodigal son, acknowledged our sins, in the Act of Consecration to the Immaculate Heart of Mary on Friday:

We have forgotten the lesson learned from the tragedies of the last century, the sacrifice of the millions who fell in two world wars. We have disregarded the commitments we made as a community of nations. We have betrayed peoples’ dreams of peace and the hopes of the young. We grew sick with greed, we thought only of our own nations and their interests, we grew indifferent and caught up in our selfish needs and concerns. We chose to ignore God, to be satisfied with our illusions, to grow arrogant and aggressive, to suppress innocent lives and to stockpile weapons. We stopped being our neighbor’s keepers and stewards of our common home. We have ravaged the garden of the earth with war and by our sins we have broken the heart of our heavenly Father, who desires us to be brothers and sisters. We grew indifferent to everyone and everything except ourselves. Now with shame we cry out: Forgive us, Lord! (Act of Consecration to the Immaculate Heart of Mary)

As the universal Church consecrated humanity, we made a manda, a promise and a prayer for the miracle that we may change the course of our actions. We must believe in the possibility of that miracle.

This is the fourth in a series of reflections for each Sunday in Lent. You can read the others here. 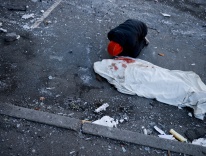