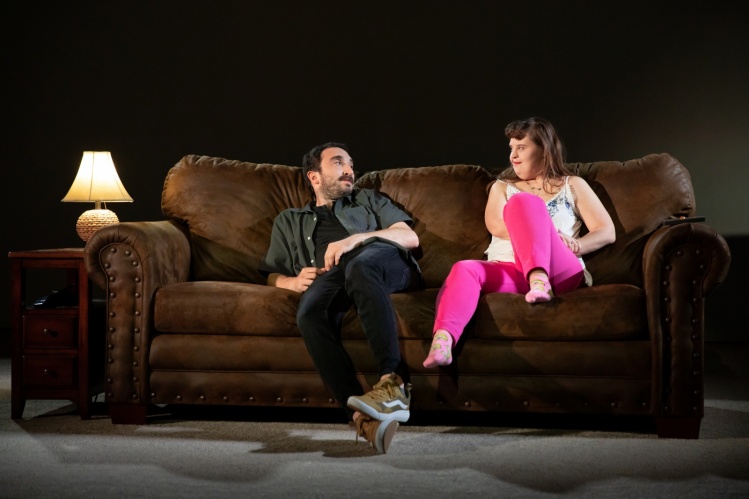 Will Dagger and Jamie Brewer in ‘Corsicana’ (Photo by Julieta Cervantes)

When writing about emerging playwrights, one expects—and indeed welcomes—a certain amount of growth. But even with that expectation, a gifted playwright retains the capacity to astonish. Will Arbery’s Heroes of the Fourth Turning made waves in 2019 and reached much larger audiences with a series of excellent Zoom productions in 2020, when it was also shortlisted for the Pulitzer Prize. Heroes stood out for its refusal to allow its audience the pleasant moral soporific of a liberal morality play: its characters were emblematic of types but not reducible to them, and its presentation of both generational and ideological divides in the American Right led critics across the political spectrum to hail it as a unique window into the tensions and anxieties of a form of religious conservatism that does not often find itself represented in the arts of the Trump era.

All this may have been true, but Arbery also writes about family: he has not been shy in talking about how his family members find their way into his characters—Gina in Heroes takes both her profession and her biography from his mother—and in Corsicana, which opened at Playwrights Horizons on June 22, he draws on his relationship with his older sister. The play opens in a living room in Corsicana, Texas, with a filmmaker named Christopher (Will Dagger) and his older half-sister Ginny (Jamie Brewer), who has Down syndrome. Their mother has recently died, and Christopher has moved home from Dallas and taken a job teaching film at the local community college to help care for Ginny. There is also Justice (Deirdre O’Connell), a family friend and middle-aged anarchist ex-librarian, who keeps them company and helps with things like getting groceries. Christopher sees Ginny going through an uncharacteristic depression in the wake of their mother’s death, and so Justice arranges for them to meet her friend Lot (Harold Surratt), an older Black artist and musician who lives outside of town.

Christopher’s care for Ginny and Justice’s care for Lot form the dramatic frame, which puts Ginny and Lot together so that he can help her write a song. He insists on doing this as a gift rather than a paid service, because payment entails consumption and, eventually, evacuation: you pay for something and it turns to shit. Gifts and people’s desire to give and to get them are one of the play’s central concerns: How and when do people give, and are they truly giving or do they have another end in mind?

Ginny and Lot expose this tension most effectively: their intellectual disabilities—Lot has no diagnosis, but he spent “a couple years in that hallway” in high school—position each of them as a locus of need, as a bevy of obligations for other people to meet. But Ginny reminds Christopher repeatedly that she is his older sister and takes seriously her own obligation to care for him. And all of Lot’s art, much discussed but never seen, is free creation, not to be sold and certainly not to be pigeonholed as what a writer for the Oxford American wants to call “outsider art.” Lot says that he and Ginny are “special,” equivocating between the euphemism and a sense of depth. He contrasts the two of them with the “Styrofoam people” around them, who are allowed to desire in uncomplicated ways. The metaphor conveys uniformity and simplicity, an easy continuity between need and desire. But part of the play’s work is to expose this simplicity as a social fiction: no one is free of the tension created by an orthogonal relationship of desire to need, and nobody’s needs are really adequately met.

Arbery cuts off all the routes by which we might escape into ideas and avoid confronting persons.
sharetweet

Lot and Ginny’s refusal of mere need is one of many refusals in Corsicana. Indeed, Arbery’s increased power of refusal is one of the most surprising developments in this play. The characters’ disavowals and refusals become the play’s own: it is not a play “about” art, or about disability, or about race, or about giving, though all these things are present in the dramatic and intellectual tension of the work. Arbery does not offer the audience these frameworks of “aboutness” because he is writing about people who are not “about” one thing or even several things. He cuts off all the routes by which we might escape into ideas and avoid confronting persons.

In the end, people and their words are all we have to work with: this is a conversation play with a plain set that alternates between Ginny and Christopher’s living room and Lot’s house. Much of the tension turns on the things people say by mistake, or fail to say, or are unable to say. The play ties this to the different kinds of hyper-surveillance and hyper-policing that Ginny and Lot experience as a function of disability, gender, and race: both have imputed (but false) sexual assault in their pasts, one as supposed victim and the other as supposed perpetrator. The scrutiny that both are put under begets falsehoods, and a genuine piece of abuse in Christopher’s past remains hidden for most of the play: he cannot say it to himself, and the evidence that prompts him to remember it disappears as soon as he tries to show it to someone else. The lack of scrutiny can produce lies as well: Christopher eventually goes to see his father, who physically abused him, and they don’t talk about any of it. Instead, they look for a piece of childhood memorabilia, and “looking for it felt like talking about it.”

The only thing the play offers in the way of resolution takes place in the final scene when Ginny’s song has been completed and the cast sings to the audience from a place out of time. I’m not entirely sure what to make of this: the final act of refusal in singing “Nobody is ever going to hear this song” in front of an audience is an effective capstone to the many refusals of the play, but the sudden jump from an intensely conversational and relational play to a song whose verses are essentially audience-directed monologues feels out of place. The scene also short-changes Lot in a big way, since everyone else gets to talk about their own interiority and he’s left singing only the words of the refrain written by Ginny. But the play has already denied us the sight of Lot’s art as a way into his thoughts, so perhaps it’s appropriate that the final scene, too, denies us direct access to his interior perspective.

There’s a danger, though, in all these refusals: we can easily miss the plenitude of unconstrained encounter with persons and succumb to interpretive nihilism, refusing to make any sense of the words and actions in front of us. This mirrors the danger of overindulgence in apophatic modes of theology: stripping away images and frameworks in order to avoid idolatry may, if we aren’t careful, leave us without any way to speak about the reality and the works of God. Corsicana seems to be aware of this, and the fact of live dramatic performance allows it to push up against these limits: words on a page stop making sense much sooner than people in the room do.

The performers are all strong, but Deirdre O’Connell’s Justice stands out with her visionary monologues. Will Dagger’s Christopher is a bundle of nerves, almost talking over himself, profoundly uncomfortable with silence and simple presence in anyone except Ginny. Jamie Brewer conveys both the maturity and the frustration of a woman with a long history of being misunderstood and misheard, and the moments in which Ginny reminds Christopher of her own duty and desire to take care of him are some of the most affecting in the play. The set design allows for smooth transitions between location and between moments in time, but these would be impossible without Isabella Byrd’s superb lighting design, which unmistakably marks both spatial and temporal boundaries.

There will not, I think, be a strong consensus around this play, because its intense concern with the specificity of personal encounter makes it quite difficult to talk about. It’s not so much that the play is a world unto itself as that each of its characters is, and audiences can hardly be expected to plumb four whole worlds in the same way, to the same degree. This is the plenitude of meaning that comes with encounter, the kind that live theater makes possible in ways that other forms of art do not. Corsicana will not generate the kind of press that Heroes of the Fourth Turning did, because it is a quieter and much less topical play. But what it offers its audience is worth receiving and sifting through and exploring, and I look forward to more of Will Arbery’s work.

Daniel Walden is a writer and classicist. He spends his time thinking about Homeric philology, Catholic socialism, musical theater, and the Michigan Wolverines.