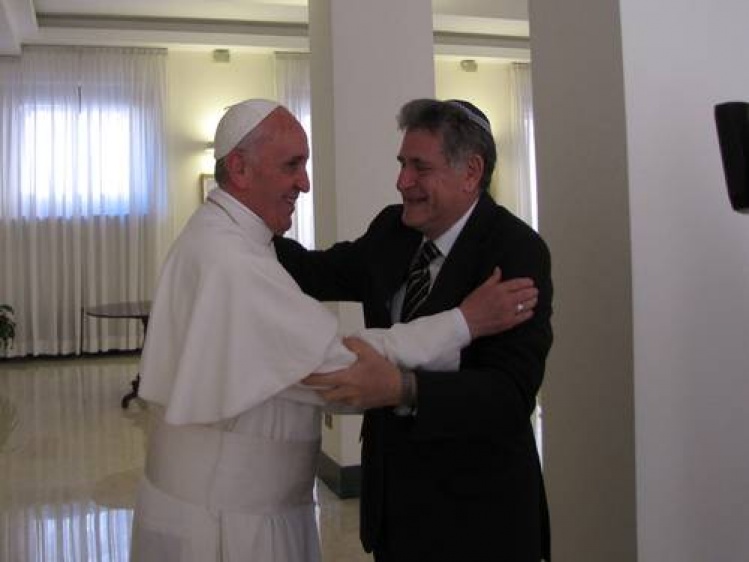 Tuesday night at Jewish Theological Seminary in New York, Rabbi Abraham Skorka spoke informally about his old friend, whom he calls “Bergoglio.” Talking in English on the topics of theology, Jewish-Christian relations, and the themes of Pope Francis’s pontificate, the Argentine Jewish leader combined memorable anecdotes with substantive reflections.

The event, “Pope Francis and the Jews,” was a unique opportunity for the mixed audience—mostly Jews—to hear behind-the-scenes stories about Francis, while also watching Skorka engage questions from Dr. Celia Deutsch, a Sister of Our Lady of Sion and professor of religion at Barnard College.

Since they co-authored a book of dialogues together, On Heaven and Earth (2010), the close relationship between the respective leaders of Jews and Catholics in Argentina has been well known. But recent months have shown the friendship to be deeper and more casual than many had realized. “Since he became pope, our friendship has become stronger,” Skorka said last night.

A long portion of the conversation focused on theology. Deutsch introduced a question by drawing a distinction between how theology is practiced in “the Global North,” especially North America and Europe, and what she sees in Skorka and Francis from the Global South. Theology in the Global North is often written by university professors for university professors, she noted, but “you two do accessible theology.” Skorka accepted the compliment: “Bergoglio and I agree, theology is not just for professionals.” The “task of theology” is easy to explain, he continued. “How to build a connection with God, respecting your neighbor.”

Skorka connected Francis’s “accessible” theology to his overall personality. Bergoglio is a “very pragmatic person,” he said. Yes, he “studied a lot,” but “first and foremost, he wants to pragmatize theology.” He has a “simple way, with simple words,” but a “very deep message.”

Skorka has studied a lot too—having earned a graduate degree in Chemistry, like Bergoglio—but strongly endorses Francis’s practical emphasis. In a moment that drew some uncomfortable laughter from the audience, Skorka contrasted Francis’s theological style with that of his predecessor: “One of the problems of Ratzinger,” he said, “was that he’s too intellectual. True? Yes.”

Spurred by a question from Deutsch about Francis’s choices of metaphors, especially “journey,” Skorka characterized Francis as someone “always going forward,” never getting caught in “vicious circles,” a phrase he repeated multiple times. The theme of “forward” echoes a refrain of Pope Francis’s speeches in Spanish (“Adelante”), such as the closing Mass of World Youth Day last July. Skorka described Bergoglio as “very committed, and never departs from the ‘north’ of his ideas,” introducing the metaphor of a compass to the discussion of his faith journey.

The warm relationship between Pope Francis and the Jewish people has been praised by Jewish leaders from around the world, such as Rabbi David Rosen of the American Jewish Committee and Rabbi Riccardo Di Segni, Chief Rabbi of Rome. Last night Skorka could not have spoken more plainly: Francis’s “commitment to Jews is total.”

He told a story of once receiving a phone call from then-Archbishop Bergoglio, after Bergoglio had been reading about the harsh treatment Jewish soliders suffered during the Falklands War. Deeply moved, Bergoglio did the only thing he knew to do, calling his best Jewish friend. “I’d like to express to you my shame, my sorrow,” he said. Regarding a question on the contentious topic of Pius XII and the Vatican archives about World War II, Skorka simply referred to the book, On Heaven and Earth. He takes Francis at his word, that “we must know the truth and go to those archives.”

Professor Deutsch was also put on the spot with a question from the audience. When asked what she would like Skorka to relay to Pope Francis about women in the church, Deutsch recommended that Francis invite women from diverse geographical and social locations in the church to speak with him about their experiences. She described a kind of listening tour, to ensure that the variety of women’s voices might be heard and women not be presumed to be monolithic in their hopes for reform. After that, Deutsch asked simply that “he pray about it,” and she evinced faith that, with Pope Francis, such a process would yield the best result.

Skorka unexpectedly followed up, though, to address the question too. Referring to himself as “someone who knows [the pope’s] thinking,” he looked intently at Deutsch and said, “Were all the decision power in his hands, he would do a lot. He would do a lot.” Skorka drew comparisons to proposed changes in halakha (Jewish law) in Jewish communities, suggesting that it is not at all easy for one leader seeking change to modify long-standing traditions.

On the question of reforms, Skorka summed up his assessment of Francis: he “has an open mind—and is traditional.” Francis’s changes, his “revolution,” will be first about “spirit” and “spiritual things,” not “political” matters, by which Skorka seems to have meant church governance.

The evening ended with a story that reminded the audience of the unique historical moments the friendship of Skorka and Bergoglio has afforded. In late September, Skorka spent the better part of a week at the Vatican, living in Santa Marta and taking his meals with the pope. When he arrived, Francis designated a seat for him in the dining room—"at his table, immediately to his right." As it happened, a cluster of Jewish holidays fell during the visit, including Simchat Torah, the conclusion of the annual cycle of Torah readings.

Whether holiday or not, Skorka needed to keep kosher. He presented Francis a “list of the details,” and the pope himself saw to it that meals for the rabbi were strictly kosher. “He was my personal Mashgiach!” Skorka joked, delighting the crowd with the term for someone who certifies the kashrut status of a restaurant.

One night, Skorka explained to Francis that he needed to do kiddush, the blessing over wine on Shabbat and holidays. The pope invited him, “Do what you have to do.” Skorka stood at table, and his old friend Bergoglio stood with him. After he prayed in Hebrew, Skorka paraphrased it in Spanish for those at table. Pope Francis, for his part, blessed their meals and “made the sign of the cross” over the food.

Their model of interreligious prayer thus manifests that of their long-running interreligious dialogue. Over a common table at the Vatican, each of them prayed “in their own way—and honored the others.” Then everyone spoke Hebrew together. They all said, "Amen."