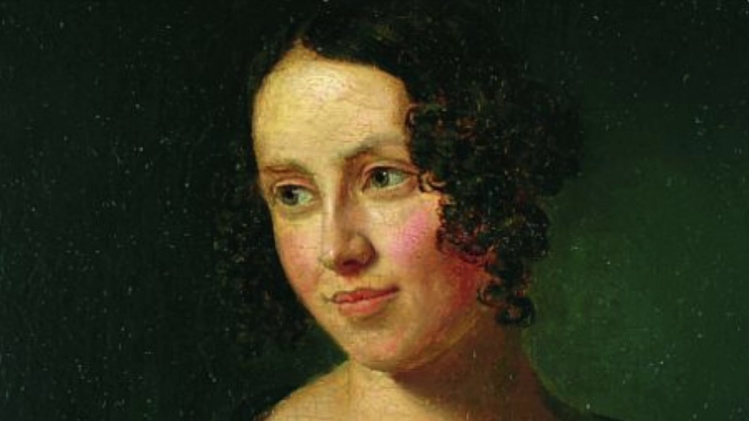 This biography would not have been written if the woman portrayed, Regine Olsen (1822–1904), had not been loved and jilted by the Danish philosopher Søren Kierkegaard (1813–1855), who went on to devote a massive body of philosophical work to her. Kierkegaard courted Regine for a year, then broke it off when he realized his aloof, melancholic disposition made him unfit to be a good husband. When she fought his decision, even going so far as to say she would be willing to live in a cupboard in his apartment—for she was a small woman, but loving, fiery, intelligent, sardonic—he acted like a rogue to try to make her hate him enough to accept their separation.

He never quite succeeded in convincing her he was a rogue. For six years Regine saw Kierkegaard on walks and at church; they would smile and sometimes nod at one another but they never spoke. In the meantime, Fritz Schlegel was courting her. One Sunday in church, Regine smiled and looked questioningly at Kierkegaard; he nodded back. What he did not know was she was asking if he approved of her marrying Schlegel. Since they never spoke, it was a bit unfair of him to be as alarmed as he was at their marriage. Biographer Joakim Garff (University of Copenhagen), describes Fritz Schlegel as, “practically the exact opposite of Kierkegaard: stable, harmonious, healthy, un-ironic, and patient...thus made for marriage.”

These words comes from Garff’s earlier effort, Søren Kierkegaard: A Biography, a 867-page tome published in Denmark in 2000 and in English in 2005, which was both an account of Kierkegaard’s life and a reading of his philosophy. Since Kierkegaard’s life and work were one and since this life-work was devoted to Regine, there was much of Regine in the biography. However, one summer, during the writing of this biography—he mentions it in the book—a “well-preserved elderly couple” asked if Garff would be interested in correspondence between Regine and her sister Cornelia from the five years Regine lived in St. Croix after Fritz was appointed governor there. The elderly woman was the granddaughter of Cornelia. Garff was amazed at his good fortune.

Garff uses Regine’s letters as jumping-off points to comment on Kierkegaard and his work, of course, but also Danish colonial history and West Indian history in general. The whole colonial world was based on the slave trade. The Danes bought slaves in Africa, shipped them to the West Indies to work on the sugar plantations, then filled the empty holds with sugar for the voyage back.

At first Regine looked down on the slaves as little more than big children; some of this attitude, besides pure prejudice, was due to the recent freeing of the slaves after a violent uprising, and the government’s failure to make that freedom real. Later though, Regine turned a blind eye to the food disappearing from her larder. “There is indeed no conspicuous turnaround [in her attitudes toward the blacks], but the imported prejudices seem to give way to a more humane and sympathetic attitude,” Garff writes, “that, on several occasions, led to Regine’s overstepping traditional class distinctions and forgetting her status as First Lady of the West Indies.” She and Fritz lived a double life, themselves not really caring for island intrigues and gossip, but still acting the roles of “courtly hosts.”

This doubleness points to a lurking presence in the marriage of Regine and Fritz: Søren Kierkegaard died in November 1855, the same year that the Schlegels moved to St. Croix. Not only was this a grief to be borne, but also a reconnection with the deceased; the wily, obsessive philosopher bequeathed all his worldly goods to Regine. This included all their correspondence and a letter that Fritz had received from Kierkegaard early in their marriage.

In this letter Kierkegaard had asked if he and Regine could talk, just talk, so that Kierkegaard could make sure she understood what he was about. Kierkegaard wanted it both ways, to be Regine’s spiritual husband or comrade while Fritz handled day-to-day duties, which never, it turned out, included children. He wrote that he and Fritz would walk arm in arm with Regine in heaven. Fritz said No, I don’t think so. For her part, Regine said no to all of Kierkegaard’s worldly goods, but took the correspondence.

Kierkegaard wanted it both ways, to be Regine’s spiritual husband or comrade while Fritz handled day-to-day duties
sharetweet

After five years in St. Croix, Fritz and Regine returned to Copenhagen. The last two chapters of Kierkegaard’s Muse describe Regine’s life with Fritz after returning to Denmark, and then, after his death, life without him. Fritz had trouble finding work in Copenhagen, and the publication of Kierkegaard’s revealing journal complicated social life. But after seeing a picture of Kierkegaard paired with one of a popular preacher of the time, he proclaimed that the philosopher would, in posterity, “still be alive!” This comment “is said to have pleased Regine immensely, and...her pleasure might just have been due to Fritz’s acknowledging in public that he had now overcome his Kierkegaard crisis,” Garff comments. “As for Fritz himself, he may have been a little proud at the thought that, thanks to his wife’s amorous past, he was sure of going down in history in celebrated company.”

The final chapter tells of how Regine shared Kierkegaard’s legacy as much as she could with any interested scholars, both to promote his work and to solve the “riddle” that he truly was:

Regine was loyal and loving to the last, happy to have been taken over into history. And just this thought compensated, according to Neiiendam [a bookseller she had befriended], for what she had suffered: “Time had smoothed away the pain, and what remained was the memory of the experience in her life.”

Garff is both a punctilious scholar and superb writer. His take on Kierkegaard, however, lacks the urgency that W. H. Auden, or Walter Lowrie, one of Kierkegaard’s first English translators, had when they wrote about Kierkegaard and his works. It reminds me of one of Kierkegaard’s uncompromising aphorisms: “The two ways. One is to suffer; the other is to become a professor of the fact that another suffered.”