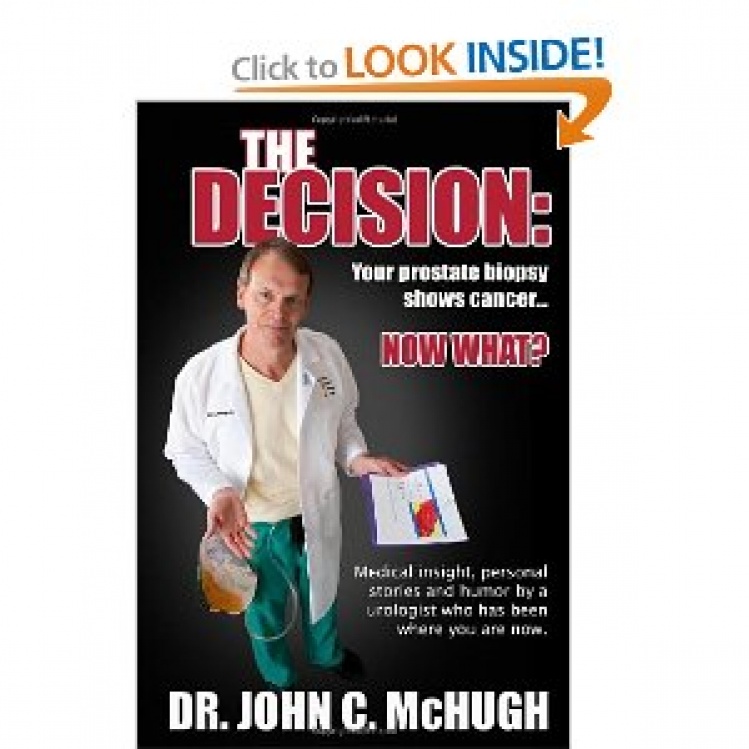 It took me about three weeks to get from my strangely embarrassed general practitioner's admission that I have gotten some bad numbers on my prostate cancer blood test to the Big Day when I got the definitive biopsy results.

“Don’t worry too much” the urologist had told me during the biopsy as he punched another needle into my prostate.  (It made a sound like someone pulling the trigger on an unloaded gun).  “With your blood test numbers you have about a thirty percent chance of actually having it.”  I found these words reassuring and tried very hard to only be thirty percent terrified for the next ten days.

On the Big Day the urologist came into the little room where my wife and I were waiting and he was brimming with optimism.  (But why not?  He is a surgeon, so even if the news was bad I’d still have an opportunity to get surgery).

Seeing the shocked look on my face he hastened to reassure me.

“It’s just one small section, which is very good.  Unless you have a lot of cancerous sections all over the place and we happened to miss them with the needle biopsy.  Then it’s not so good.  With cancer, we recommend surgery or radiation treatments (I’d go with the surgery, but then, I’m a surgeon) or we can do what’s called “watchful waiting” where we don’t do anything and then retest every year until we find something worse that requires surgery or radiation.  Your cancer is probably low risk and I don’t think that you would be risking too much to just wait and see.  Unless it turns out that it is actually very aggressive, in which case you shouldn’t wait at all.  All in all, the cancer will probably kill you eventually if you don’t do anything about it, but the good news is that you are just as likely to die of something else first.  It’s up to you.  It probably depends on how lucky you feel.”

Having just been told that I have cancer, I must admit that I wasn’t feeling very lucky at that particular moment.  At that moment, my prostate, a walnut sized gland in my pelvis that I had never paid attention to before felt like it was the size and shape of a manhole cover.  I wasn’t in any pain and I had no evident symptoms of any sort.  It’s just that the little gland suddenly loomed large in my consciousness.  I must have looked distracted at that point and the doctor hastened to reassure me.

“If you decide on surgery (and I’m not trying to steer you in any direction although if I were you I’d have the surgery), we use a big robot nowadays named Da Vinci to assist.  There are almost no complications except for occasional heavy bleeding and once in a blue moon a stroke or heart attack. After all, it’s major surgery.  But you are relatively young so I would not expect you to experience any of these or have any serious side effects, which are mostly permanent impotence and permanent incontinence.  But even if that happens, we have surgical and other remedies for it so that we can pretty much more or less take care of it.  (Here he launched into a disturbing list of available prosthetics.)  Take a few weeks and talk to your wife.  Get a second opinion, maybe even from a radiologist.  And then come back with your decision.  In the meantime, relax and don’t worry.”

It’s a strange thing to be told that one has cancer.  I mean, cancer!  And in getting cancer, if I ending up beating it, I would become a cancer survivor.  The fact that I had just a bit of cancer didn’t mean anything.  It still counted as cancer.  When the initial fog of panic cleared, I saw that I had the usual two issues.  The first was the technical issue of what to do about it.  And the second was the spiritual issue of being reminded in a vivid way of my mortality.

The technical issue turned out to be relatively easy to deal with.  After all, it’s all about techniques and the odds.  In the end it comes down to a sort of mathematical equation, albeit one that includes one’s own personality tendencies and outlooks on life.  There are plenty of books out there and experts to help one get through this.  In general, it appeared that the educated person at least would simply consult the books and the experts until a solution revealed itself.

The spiritual side was trickier.  As a Christian, I was already supposed to be keeping death in plain view at all times.  Being told that I had cancer should not have changed this very much, which means that having a nasty disease shouldn’t have much of a spiritual effect on me, if, of course, I have really been keeping up with the spirit of Christianity.  But naturally, I found out that I really hadn’t been.  When push came to shove, I had believed that I would live forever, just like everyone else.  So now what?

And so it was for spiritual advice rather than technical advice that I found myself going to the book The Decision: Your prostate biopsy shows cancer… Now What? By Dr. John McHugh.
McHugh is a urologist who got prostate cancer himself and in the book he (first of all) documents the steps that he took to decide what to do about it.  The book is not so much a handbook on options (although it is that) as much as a handbook on decision making.  But in the book he also talks about what it’s like to have prostate cancer and to go through the aftermath of treatment, from the point of view of a doctor who had been reassuring his patients for years about how everything would probably be fine unless it wasn’t.  The book is surprisingly humorous (note that he is wearing a catheter outside of his scrubs on the cover of the book) as the doctor talks about the challenges of wearing a catheter and adult diapers for several weeks with dignity (for example) or dealing with the inevitable sexual side effects even from an overall successful operation.

It’s not specifically a book on the Christian spirituality of taking bad news.  But I nonetheless found it helpful in that regard, because for me, the spiritual problem of having cancer was in putting it in perspective.  Perspective is what creates a space where I can then deal with this spiritually.  Cancer is not, in fact, killing me at the moment (as far as I know) and my personal situation had not in fact changed very much in the period where I was diagnosed.  Or to put it another way, one of the facts of our life is our basic frailty as humans (both physically and spiritually) and getting bad news like this doesn’t change that fact one iota.  It merely confirms it as we could confirm it dozens of times a day if we wanted (or dared) to.  We can look at our frailties in a grim manner if we want (since all roads lead to decay and death), but if we have a spirituality that affirms life our frailties become funny in a way.  McHugh telling the story of having a major dinner party at his house is actually funny.  He refuses to tell anyone that he recently had major surgery and that he will need to leave the yard and freshen up (his Depends) frequently, opting instead to pretend that all is normal and to tough it out.  This causes him to not very subtly attempt to freshen up using removable pads, where he constantly steps away to the bushes or behind the garage for a few moments to do a quick change.  This leads to pads being hidden all over the place until his dog finds one and the jig is up. Very human this, very frail yet very funny.  Spirituality in the context of the realities of human physical existence is very much a function; it seems to me, of perspective.  If we love, we have to laugh.  And if we laugh, we have to love.  And the book is a very loving and laughing account of what to do what one gets the bad news.

unagidon is the pen name of a former dotCommonweal blogger.