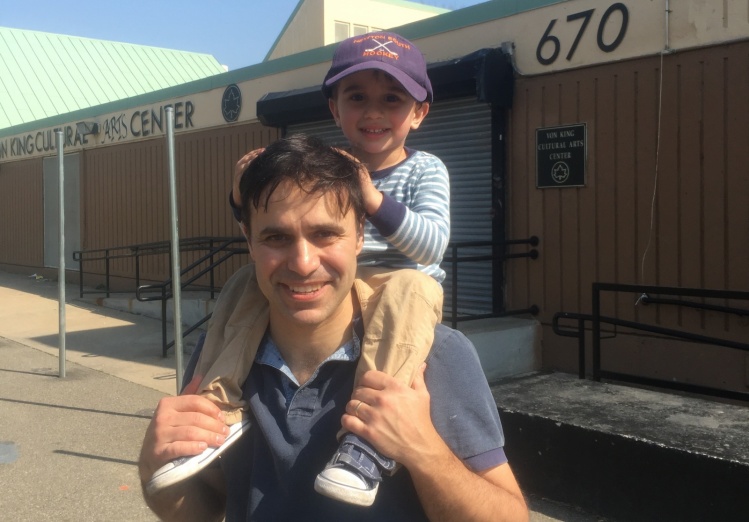 Keith Gessen with his son, Raffi (Photo by Emily Gould)

Just after I started reading Raising Raffi: The First Five Years, Keith Gessen’s captivating new book about the perplexities of parenting and fatherhood, I made a brief spectacle of myself at a swimming pool. I’d invented a game in which my kids took turns riding on my back as I swam underwater with my eyes closed, with each child leading me to a certain spot in the pool using a series of taps on my shoulder. They loved it. To the other swimmers at the rec center, I must have seemed like an excellent father at that moment: playful, fun-loving, inventive. Then my seven-year-old daughter led me face-first into the pool’s concrete edge.

“WHAT ARE YOU DOING?” I yelled, opening my eyes and clutching my face, which felt broken. “You ran me into the wall!”

I got out of the pool to tend to my wounds, storming past my wife, who was having a conversation with another parent nearby. A lifeguard walked by and informed me that my nose was bleeding. My wife eventually came to check on me, the look on her face indicating that she was both amused and disturbed by my behavior. When my nose and forehead stopped hurting quite so much, I realized that I needed to apologize to my daughter and explain that it wasn’t her fault. I got back in the pool with her and kept swimming. We had a good time.

I offer this anecdote as a parable of fatherhood. To be a dad, and a parent in general, is to find yourself at the mercy of an emotional pendulum that swings more suddenly and more frequently than in your daily non-parenting life. You are forever reacting to the little person or people you love—and reacting to their reactions, and reacting to your own reactions—moving back and forth between joy and exasperation, between tenderness and impatience, between enthusiasm and exhaustion, between the cool water and the concrete wall.

Raising Raffi is the first book I’ve read that manages to articulate what it feels like to experience some of these baffling, amusing, disturbing extremes. Gessen’s book focuses on his son’s first five years of life, recounting the quirks and difficulties of each stage in Raffi’s development. Gessen and his wife, the novelist Emily Gould, face these difficulties together, and he acknowledges that she’s the more informed and effective parent. But the book focuses mostly on his own complex reactions to his son, examining the “contradictory mass of feelings” he experiences as a first-time parent, especially once Raffi transforms from a helpless, screaming newborn to a “cuddly one-year-old” and then into something more difficult: an unruly child.

One of the delights of this book, for me, was accompanying Gessen on his enthusiastic and largely unsuccessful mission to find a solution in various books on discipline and parenting philosophies. While reading The Kazdin Method for Parenting the Defiant Child, a highly regarded book on child behavior, he has a revelation that made me laugh out loud:

Everything we’d been doing was wrong: the time-outs, the yelling, the belief that if we told Raffi to stop doing something enough times, he would actually, like a normal person, stop. And yet weirdly I was not discouraged to learn this. We’d been doing everything wrong but now we would do everything right: we just had to do the exact opposite of what we were doing.

During a particularly difficult time with my own kids, I was inspired by the same book, responding in an almost identical way. (Gessen tells us that his wife finds the book’s sticker-chart reward system “philosophically revolting,” likening it to giving their son “a quarterly performance review at the corporate job that was his childhood,” although she reluctantly agrees to try it. My spouse was equally skeptical.) Gessen finds, as I did, that while the book offers some genuine and lasting insights, its methods don’t quite fit his family’s reality. Subsequent books on discipline lead him to other revelations and little permanent change. No book offers a magic solution.

Rather than adopting the knowing tone of an expert, Gessen takes the reader along with him as he tries his best to figure things out.
sharetweet

In the end, the most lasting insight he encounters in his reading isn’t about how to discipline Raffi. What most helps him survive an especially trying period of family life is a “patient and generous” older book: Your Three-Year-Old: Friend or Enemy by Louise Bates Ames and Frances L. Ilg. Their descriptions of the emotional lives of small children remind Gessen to attend a little more closely and empathetically to Raffi’s inner life and the “turbulent and troubled” experience of being a small child. “This was new to me,” he writes, “this idea of Raffi not as a problem to be solved, but as a person going through difficulty, a little person but a person still.”

You wouldn’t know it from the book’s cover (or from reading this review so far), but Raising Raffi is actually a collection of essays rather than a memoir. In an author’s note, Gessen outlines the content of the book: “nine essays, arranged by subject: birth, zero to two, bilingualism, discipline, picture books, schools, the pandemic, sports, and cross-cultural parenting.” Each chapter can stand alone, although they all contribute to the narrative of Raffi’s first five years. Most of the essays were previously published in the New Yorker and elsewhere, but they’ve been revised to form a coherent whole, and there isn’t a dud among them.

A novelist and journalist by trade—he co-founded the literary journal n+1, has written extensively about Russia and Ukraine, and teaches journalism at Columbia—Gessen explores each parenting topic with openness, intelligence, and bracing honesty. The book manages to be both really funny and deeply thoughtful. Rather than adopting the knowing tone of an expert, Gessen takes the reader along with him as he tries his best to figure things out, relying on actual experts and reflecting on his own mistakes (“Here is where we screwed up, I think…”) to try to make sense of the many complicated dimensions of raising a child.

And raising a child is complicated. Take, for example, the task of choosing a school for your child. Gessen and his wife are raising Raffi in New York City, renting in Bed-Stuy. Private schools seem to be out of the question, for both financial and philosophical reasons. Should they choose the public school closest to their house? What if they can get him into a better public school that’s a little farther away? But what, exactly, constitutes a “better” school, anyway? And what about diversity? What if the “best” school for Raffi clashes with their sense of justice?

As he wrestles with these questions, Gessen refers to Nikole Hannah-Jones’s extensive reporting on segregation and U.S. education. He’s even able to get Hannah-Jones to speak to one of his classes about one of her celebrated New York Times Magazine articles, “Choosing a School for My Daughter in a Segregated City.” Gessen doesn’t want his family to be part of the problem. But he also finds that every possible choice offers only an imperfect answer. As the process moves forward, he comes to recognize his own “moral vanity” and realizes that he has misunderstood one of Hannah-Jones’s key points, reading her work “too literally, or self-servingly.” In the end, this chapter is illuminating not because of the school they choose for Raffi, but because of Gessen’s willingness to reflect on the limited knowledge, information, and understanding that went into that choice.

“Children are their own people, yes, but they are also so much at our mercy.”
sharetweet

Having emigrated from Russia with his family as a boy, Gessen wants Raffi to inherit the Russian language and some Russian culture. But accomplishing this in reality also turns out to be far more difficult than he’d imagined, full of unexpected complications. Likewise, having played hockey and football as a young man, he wants Raffi to take an interest in sports. But Gessen recognizes the moral ambiguities and practical difficulties here as well, especially when Raffi seems to show very little interest in hockey (“Sometimes, especially at the rink in Queens, he would lie down on the ice and start eating ice shavings”). In each case, he holds his own hopes up to honest and nuanced self-examination. He also reflects more generally on the fraught nature of burdening our children with our aspirations for their lives. After recounting the parallel stories of two hockey-obsessed fathers, one of them “monstrous” and the other widely admired as the father of a hockey legend, Gessen offers this striking reminder: “Children are their own people, yes, but they are also so much at our mercy—at the mercy of our moods, our insecurities, even our dreams.”

I read the latter chapters of Raising Raffi in my backyard in Houston as all five of my kids played together, from the three-year-old to the eleven-year-old. The scab on my nose from the pool incident was almost healed. It was overcast and cooler than usual, one of the few days all summer when the temperature never threatened to reach one hundred. I felt, strangely, like we were back in our early pandemic days.

After playing a bit, my kids decided to go eat their “elevenses,” a term they’d learned the day before from a Paddington picture book. When they returned, I began making some notes about their activity in the margins of my book. My older son asked me if I could time him as he ran around the tree three times. (“Yeah!” shouted one of his siblings. “Can we do timing?” I said we could.) A few pages later, I noted that I had to tell them not to throw rocks. A few pages after that, I had to tell my youngest to stop swinging a sharp piece of wood. Soon they were all sitting in a circle, playing Duck Duck Goose, except they were saying “zombie” instead of “duck.” Later one of the kids brought me a dragonfly wing and told me to go inside and show it to Mama. Another brought me a “heart leaf.” I traced an outline of it in my book.

Gessen’s generous and highly readable book reminded me to pay a little more attention to all of this. Despite all the frustrations of parenting a willful and difficult child (and every child is willful and difficult at some point), Gessen’s affection for his son, and the delight that his son gives him, animates every essay. Raffi may baffle and infuriate his parents, but he also constantly surprises them. And this is a quality Raffi shares with my children and everyone else’s: you never know what they might say or do next. That’s just one of the reasons they’re so difficult to raise and so easy to love.