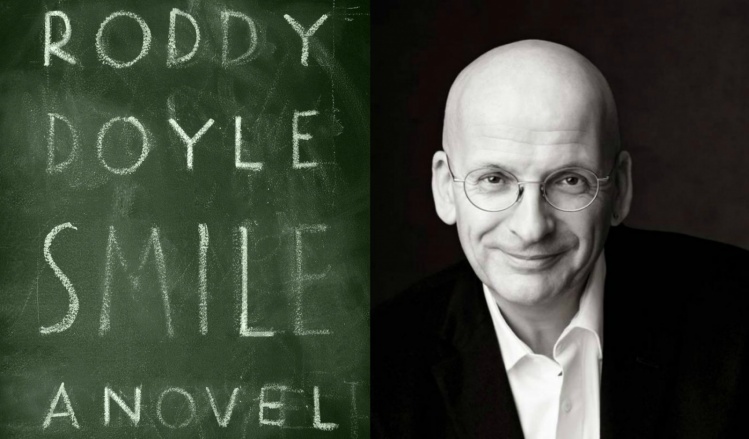 Revelations of maltreatment, sexual assault, and neglect of children under the care of Catholic clergy have changed the political landscape in Ireland, a country where the church’s reach extends into public schooling, hospitals, social services, and family life. Roddy Doyle’s latest novel, Smile, channels Irish outrage at the abuse and its cover-up, but withholds the story’s full moral fury until its final pages. Doyle, after all, is a literary master of the deceptively light touch. In Smile, his narrator’s ironic introspection and his characters’ deft banter reassure the reader even as Doyle gradually but relentlessly intensifies a mood of foreboding.

Smile’s middle-aged narrator, Victor Forde, is a rueful, self-doubting writer despite the fifteen minutes of fame he briefly enjoyed as a young cultural commentator. Once the husband of a famous media darling, the love of his life, Victor tells us his marriage is now over. He has moved from the center of trendy Dublin to the decidedly less fashionable neighborhood where he was raised. Lonely, his career in shambles, he establishes his presence in a local pub, where he hopes to enjoy the nightly ritual of pints and the company of regulars.

Soon enough, a man he can’t quite place introduces himself as a childhood schoolmate. Victor takes an immediate disliking to Eddie Fitzpatrick, who is large, coarse, and clumsy, but also feels some guilty pity. Gradually his conversations with Eddie remind him of a childhood he has mostly filed away in the deepest reaches of his subconscious. A reader learns early in the story that Victor, years before, revealed on a radio broadcast that a Christian Brother at his secondary school had fondled him. Now Fitzpatrick’s questions cause him to delve deeper into his memories of the Brothers’ torments.

So far, so Roddy Doyle. Doyle charmed his way onto the literary scene thirty years ago with The Commitments, a rollicking, profane, dialogue-driven account of a Dublin soul band. The Snapper and The Van, the following volumes in his Barrytown Trilogy, expanded his range with less obviously comedic material: unwed motherhood, layoffs, a family’s economic dead ends. Doyle’s narrative heart belongs to outsider Dublin, the scrappers and strugglers who embody the Irish argument with capitalism itself. As his novels have darkened and deepened, his explorations of working-class Dubliners’ lives have peered behind the closed doors of propriety to take on the painful subjects of the dissolution of marriage (the Booker Prize-winning Paddy Clarke Ha Ha Ha) and spousal abuse (The Woman Who Walked into Doors). The snappy dialogue that defines Doyle’s style for so many readers is matched by his taut exposition, but he has also been drawn to more experimental forms; his historical trilogy The Last Roundup, chronicling an IRA man on the run, tries out improvisational riffing and consciousness-streaming while sweeping through twentieth-century history.

At first, Smile appears to be more of a piece with Doyle’s earliest novels, especially in its dynamic memories of childhood and adolescence.
sharetweet

At first, Smile appears to be more of a piece with Doyle’s earliest novels, especially in its dynamic memories of childhood and adolescence. Children play a crucial role for Doyle, who began his career as a teacher and who is especially good at conveying the vulnerability of schoolchildren. As Victor enters secondary school, his father is dying, and though the Christian Brothers discipline the boys with shockingly casual violence, they express their sympathy as well as their unwanted attention: “Victor Forde,” Brother Murphy tells him, “I have never been able to resist your smile.” Comic memories of schoolroom scenes yield to a gothic sense of dread as Eddie Fitzgerald aggressively dares Victor to remember the past more precisely.

In flashbacks, we learn that the young adult Victor Forde is enraged (like Roddy Doyle, a reader suspects) about the entire range of power the church exercises in Ireland, especially over sexual ethics. The novel anticipates the current Irish debate on abortion when Victor, starting out as a journalist, reports on a politician who travels to London, as many Irish women have traveled, for the procedure the British call a “termination.” Later, after his mother objects to his telling the story, Victor asks: “Do you think it’s murder?” She answers: “No, I don’t. But I won’t be jumping up and down telling people that.” It is that insistence on silence that maddens Victor as the novel builds to confront vile sexual abuse. Without indulging in graphic recreations, Doyle suggests in a brother’s single line—“You’re old enough to stop me”—the psychological burden Victor Forde has borne in silence all these years. And as the story draws to its close, Doyle doubles down on the shattering effects of sexual trauma. If you accept the premise that we can’t expect a novel’s characters to be sociologically representative, then you can accept Victor’s splintered psyche at the novel’s end as a portrayal of one individual rather than a broad representation of piteous victimhood.

Trickier is a plot revelation that upends all the reader has understood up to this point, including the form of this novel. Is that revelation a gimmick? Or is it an apt narrative analogue for the way sexual abuse can destroy a victim’s memory and understanding of moral agency? Though Doyle has cleverly planted clues about Victor’s self-deceptions throughout these pages, the ending scene closes the novel so abruptly that Eddie Fitzgerald’s identity, and indeed all of Victor’s past, remain murky.

The one sure conclusion a reader comes to is this: an entire system of authority, discipline, and silence has crushed Victor Forde’s sense of self. Though the rushed ending leaves me unconvinced that this is Doyle’s strongest novel yet, as many reviewers claim, Victor’s plight has roiled me. It’s my hunch that most Catholics who haven’t been personally touched by abuse could probably use that kind of literary roiling, no matter how much this narrative challenges the church and religious faith itself. As it channels the voices of outrage still sounding in Ireland and around the world, Smile bears witness to damage almost beyond imagination—but it does dare to imagine, with a strange form of narrative empathy, and demands its readers imagine too.