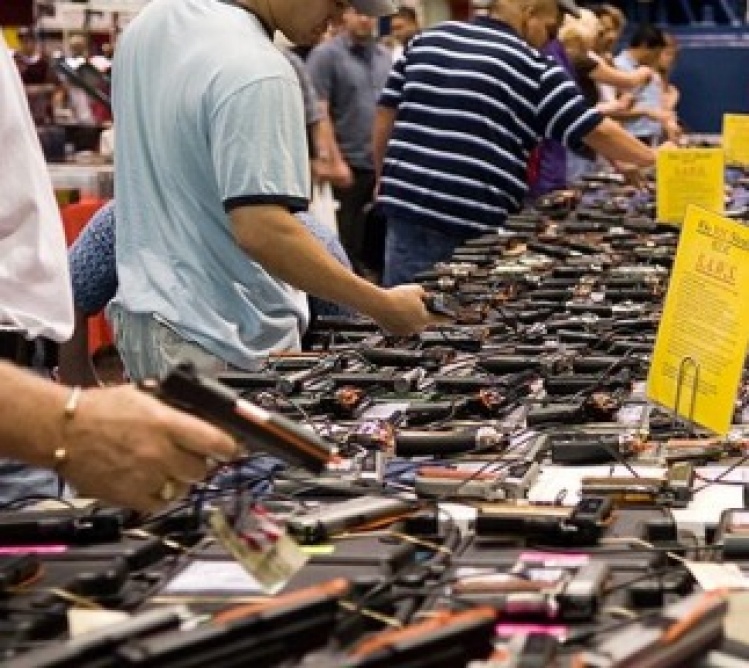 “The domestic arms race has been escalating,” Commonweal’s editors wrote in April 1989. That January, a shooter wielding a semi-automatic assault rifle had opened fire on schoolchildren and teachers in Stockton, California. This, finally, was “too much,” the editors said—a horror that could motivate the public and politicians to move beyond simply debating the issue and act “on carnage control, if not yet on gun control.”

Twenty-four years later, both guns and carnage remain out of control. The United States has the highest rate of gun ownership in the world, with more than 200 million guns in circulation. The result: a rate of violence wildly out of step with all other developed nations. There are approximately thirty thousand firearm fatalities every year in the United States (according to data compiled by the Firearm and Injury Center at the University of Pennsylvania), and more than twice as many non-fatal firearm injuries. More than three hundred of those killed annually are under the age of fifteen (.pdf). Some forty police officers are killed by guns every year. And every seventeen minutes, someone in America commits suicide with a gun.

Gun-rights advocates insist that the proper response to this carnage is putting still more guns into more hands. “The only thing that stops a bad guy with a gun,” insisted NRA executive Wayne LaPierre in December, “is a good guy with a gun.” In the case of the December 14 shooting in Newtown, Connecticut, when a heavily armed shooter killed seven adults and twenty first-graders before turning a gun on himself, identifying the “bad guy” was an easy matter. But the broader epidemic of gun violence is not reducible to simplistic slogans. The numbers represent a wide range of social problems—including mental illness and inner-city crime (a disproportionate number of gun victims are young male minorities)—that won’t be resolved by limiting access to guns. But the easy availability of firearms is the most basic reason those problems turn deadly with devastating frequency. As the Penn study points out, “Firearms, especially handguns, are effective lethal weapons with the capability to escalate often-impulsive acts of interpersonal violence or suicidal thoughts into death.”

Over the past twenty-four years, there have been a few steps forward on gun control and many steps backward. The ban on assault weapons that Congress passed in 1994 was weakened by numerous exceptions, but it still had some small success in decreasing gun-related crime—until Congress allowed it to expire in 2004. State laws have been watered down, and the Supreme Court’s 2008 ruling in District of Columbia v. Heller made private gun ownership even harder to regulate. Republican members of Congress, and many of their Democratic colleagues, are beholden to the gun lobby, and even those Democrats, including President Barack Obama, who claim to want stronger gun laws go out of their way to avoid incurring the NRA’s disapproval. In his 2012 town-hall debate with Mitt Romney, Obama was asked, “What has your administration done or planned to do to limit the availability of assault weapons?” He hedged: “I believe in the Second Amendment.... What I’m trying to do is to get a broader conversation about how do we reduce the violence generally.”

The latest school massacre, in all its horror, seems to have moved the public, and even Obama, beyond the “conversation” stage. In his debate response, Obama mentioned “seeing if we can get an assault-weapons ban reintroduced.” After Newtown he seemed more resolute: speaking at a memorial service for the victims, he asked, “Are we really prepared to say that we’re powerless in the face of such carnage, that the politics are too hard?”

Obama has said he will announce specific steps he plans to pursue in his forthcoming State of the Union address. The serious restrictions that America’s gun problem calls for—like the registration and licensing of guns and owners—are, regrettably, political impossibilities, and will be for years to come. But there is broad support (even among NRA members) for some proposed reforms that could make a difference, including mandating universal background checks for firearm purchases (eliminating the “gun-show loophole”) and banning high-capacity ammunition clips. Due to resistance from the NRA, the Bureau of Alcohol, Tobacco, Firearms, and Explosives has not had a permanent director since 2006; now would be a good time to appoint one. And a strengthened assault-weapons ban ought to be reintroduced in Congress. Let those who would oppose it defend their votes.

These steps would not address every cause of gun violence in America. They would do nothing about the 200 million guns on the street. They might, in the end, amount only to carnage control. But it is well past time for that.

A Language of Solidarity