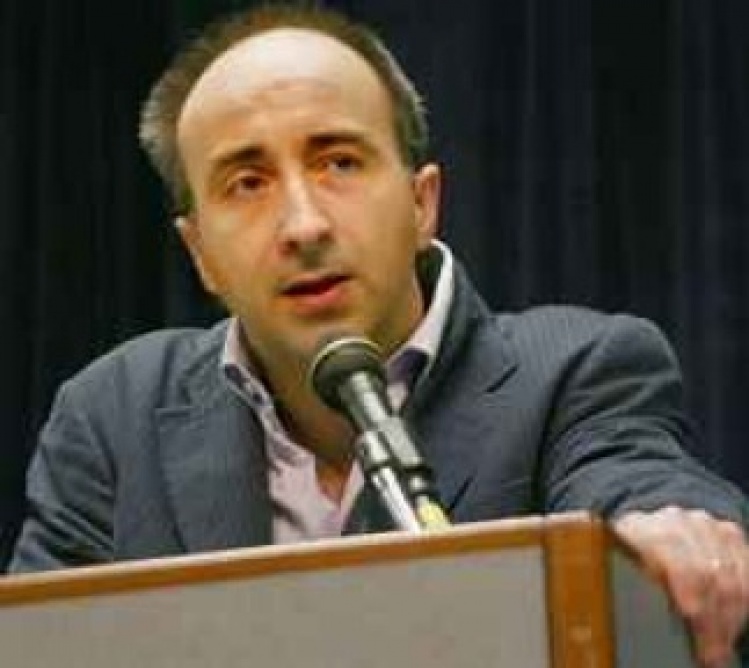 James Wood, a staff writer for the New Yorker and the author of the new essay collection The Fun Stuff, is as close to a rock star as a literary critic can get. He is a full professor of English at Harvard based solely on the strength of his literary journalism (he doesn’t have a PhD). His reviews are required reading for anyone interested in contemporary fiction, seeming to provoke equal parts adulation—Cynthia Ozick has called him “our Hazlitt”—and recrimination: there’s even a blog, “Contra James Wood,” devoted to showing that the emperor has no clothes.

Wood comes from an Evangelical background, and defenders and critics alike have cast him as a kind of Old Testament prophet, railing against the “hysterical realism” of writers like Zadie Smith and bemoaning the fact that, in so much contemporary fiction, shallow irony and sociological detail have replaced moral seriousness and aesthetic power. Wood’s essays are nothing if not polemical, and he often seems more interested in offering his own normative claims for what constitutes good art (his last book was grandly titled How Fiction Works) than in reviewing the book at hand.

I studied with Wood as an undergraduate and still marvel at the gap between Wood’s professional reputation and his personal demeanor. In the classroom, Wood was quirky and warm. While puzzling over a complex passage, he would vigorously rub the top of his head, as if hoping to coax interpretive brilliance from his bald spot like a genie from a lamp. Whenever he had students read aloud from his personal touchstones—Saul Bellow and Chekhov, George Eliot and Herman Melville—he would smile and nod, almost purring in satisfaction at the particularly good bits. He seemed not a prophet standing against the tide yelling No, but just a really, really smart reader who really, really cared about literature.

His new collection offers a glimpse of the Wood his students know. The book’s very title indicates that this will be a departure from Wood’s regular mode: we’ve left behind the high seriousness of How Fiction Works and arrived at the fun stuff. And the opening essay confirms this departure, taking as its subject not the power of nineteenth-century realism or the problems of contemporary fiction but Keith Moon, the manic drummer of the Who. The essay is really a paean to the exhilarating freedom of rock music: as Wood puts it, “subtlety is not rebellion, and subtlety is not freedom, and sometimes it is rebellious freedom that one wants, and only rock music can deliver it.” The essay begins with the story of how, as a boy, Wood longed to throw aside his classical music training for the “noise, speed, rebellion” of the drums. Wood then shifts between rapturous descriptions of Moon’s inventiveness, disturbing details about the drummer’s excesses (when he died, “thirty-two pills were found in his stomach, and the equivalent of a pint of beer in his blood”), and Wood’s memories of his own drumming experiences: “only playing the drums still makes me feel like a little boy.” This is a side of Wood—seriously playful, but still playful—that readers have rarely seen before, and it’s refreshing. Wood, a rock fanboy. Who knew?

The Fun Stuff isn’t all quite so much fun—there are serious meditations on the ethical dilemmas of fictionalizing historical trauma, on theodicy, on “the theological question[s] stirred by apocalypse”—but it’s more pure fun than any of Wood’s previous collections. It’s also more personal. A review of Marilynne Robinson’s fiction, for instance, opens like this: “Growing up in a religious household, I got used to the sight of priests, but always found them fascinating and slightly repellant.” Another, on George Orwell, begins, “I vividly remember when I first read George Orwell.” Another, on Patrick French’s biography of V. S. Naipaul, begins, “The public snob, the grand bastard, was much in evidence when I interviewed V. S. Naipaul in 1994, and this was exactly as expected.”

Wood has been criticized for arguing from his own idiosyncratic tastes to critical principles: War and Peace, with its serious moral vision and its sense for the “intimate palpability” of the real, hits all the Wood sweet spots, so it must be the pinnacle of literary achievement and any departure from its example must be lamented. In The Fun Stuff, Wood seems more willing to write from personal experience and to acknowledge that he’s doing so. The result isn’t a weakened critical position but a stronger sense of how and why literature matters to a specific person with specific experiences.

The collection’s final essay, “Packing My Father-in-Law’s Library,” is also its darkest. In it, Wood describes his relationship with his father-in-law—“a complicated, difficult, brilliant man” who was mean when drinking and not particularly nice when sober. When he died, Wood and his wife, the novelist Claire Messud, were left to deal with his extensive book collection. This leads Wood to think about the “paradoxical” nature of personal libraries, which seem to reveal so much and so little about the collector:

The more time I spent with my father-in-law’s books, the more profoundly they seemed not to be revealing but hiding him, like some word-wreathed, untranslatable mausoleum. His Algerian childhood, his interesting mind, the diversion of that mind into run-of-the-mill business, his isolation and estrangement in America.... [O]f course, in some general way, these thousands of volumes—neatly systematic, proudly comprehensive—incarnated the shape of his life, but not the angles of his facets. The books somehow made him smaller, not larger, as if they were whispering: “What a little thing a single human life is, with all its busy, ephemeral, pointless projects.”

I don’t mean to give the sense that The Fun Stuff is a memoir masquerading as a book of criticism, or that it is a completely new direction in Wood’s career. The book still stands on its brilliant close readings. In one essay, Wood points to the “vatic histrionic groping” of some of Cormac McCarthy’s sentences; in another, to the “slightly barbaric twisting of language” in Norman Rush’s Mating.

Most memorable is Wood’s quiet but ruthless evisceration of the British novelist Alan Hollinghurst. In his review of Hollinghurst’s The Stranger’s Child, Wood writes that he “lost count of how many times people look ‘levelly’ or ‘narrowly’” at each other within the novel, and follows this with a list of seven such offenses. Then, he writes that “there is a great deal of repetitive muddling,” and includes six examples of Hollinghurst describing “muddled feelings” or a “muddled glare” or something similar. He ends his lambasting-by-listing with this sentence: “These relics—flecks of aspic—are, in themselves, hardly heinous, but cumulatively they suggest an overindulgent hospitality toward the material, a comfort level that the prose persistently locates and secures.” Game, set, match.

When rereading this passage, though, I was nagged by the striking phrase, “overindulgent hospitality.” Wood loves this kind of formulation, wherein a noun is paired with a wholly unexpected modifier. He praises them in other writers—when Hollinghurst is on his game, Wood argues, his “power comes from nouns and adjectives placed in unusual combination”—and his own work is littered with them. In the same essay, Wood describes the “stealthy equality” of Hollinghurst’s sentences when they work well and the “diligent slumber” of them when they don’t; in an essay on Marilynne Robinson, we hear of her writing’s “founded ecstasies” and its ability to reduce the critic to “fond mumbling”; the list could go on.

To parrot Wood, these phrases, in themselves, are hardly heinous—in fact, they’re often quite powerful—but cumulatively they suggest a writer who is too comfortable with his own prose style. Wood tells us that, while reading The Stranger’s Child, he got an “itching to write a parody of Hollinghurst’s Jamesianism.” While reading The Fun Stuff, I got the itch to write a Wood parody: But the stolid truancy of his prose never fails. The book’s restrained prolixity....

Perhaps this is why I liked the first and last essays of the collection so much: they show Wood stretching himself, moving beyond his own comfort level. In fact, I wanted more of this. Wood has written on the “bizarre locutions” of Sarah Palin and the theological underpinnings of Rick Santorum’s political ideology for the New Yorker. I would love to see a collection in which Wood trains his critical eye less on novels and more on political discourse, cinema, religion, music.

In the collection’s first essay, Wood describes the half-bar pause that resides between the lines of a song. This pause allows the drummer “space for a quick roll, or a roll and a triplet, or something fancy with snare and hi-hat—really, any variety of filler.” This filler, Wood writes, the space where improvisation and invention happens, is “the fun stuff.” The best parts of The Fun Stuff are likewise those moments when Wood departs from expectation, when he’s doing what we least expect of him. Like a good rock band, Wood leaves us wanting more. Now, we wait for the encore.