Elevation of The Museum of Modern Art on Fifty-third Street with cutaway view below street level. (© 2017 Diller Scofidio + Renfro)

In 1933, four years after the Museum of Modern Art had opened in temporary quarters on Fifth Avenue, Director Alfred H. Barr, Jr. presented the board with a vision of his “ideal permanent collection.” It placed Paul Cézanne, Paul Gauguin, Georges Seurat, and Vincent van Gogh at the beginning of what he called a “torpedo-like” trend toward abstraction. Three years later, he created an even more elaborate schematic of the chronology of modern art movements. This cover design for the catalog of Cubism and Abstract Art cemented for decades the museum’s canonical view of the works it was founded to celebrate.

In 1939, the museum moved to its flagship building at 11 West 53rd Street, where it’s been ever since. That year Barr mounted Art in Our Time, which showcased the museum’s permanent collection, just as MoMA acquired its most famous painting, Pablo Picasso’s Les Demoiselles d’Avignon (1907). That year Barr also curated a major retrospective, Picasso: Forty Years of His Art. His museum’s reputation had been made.

Regular modifications to the original Philip L. Goodwin and Edward Durrell Stone building continued for another fifty years. Philip Johnson completed two: a modest addition in 1951 and a larger eastward expansion in 1964. César Pelli added a new West Wing and the residential Museum Tower in 1984, after then-director Richard L. Oldenburg sold MoMA’s  air rights to generate capital for the new construction. Even more ambitious was Yoshio Taniguchi’s 2004 renovation and expansion. Commissioned to celebrate MoMA’s seventy-fifth anniversary, it sensibly reintegrated the museum’s growing campus with its urban surroundings. (In a typical Taniguchi touch, large windows frame the handsome townhouses on 54th Street, making them works of art unto themselves.) 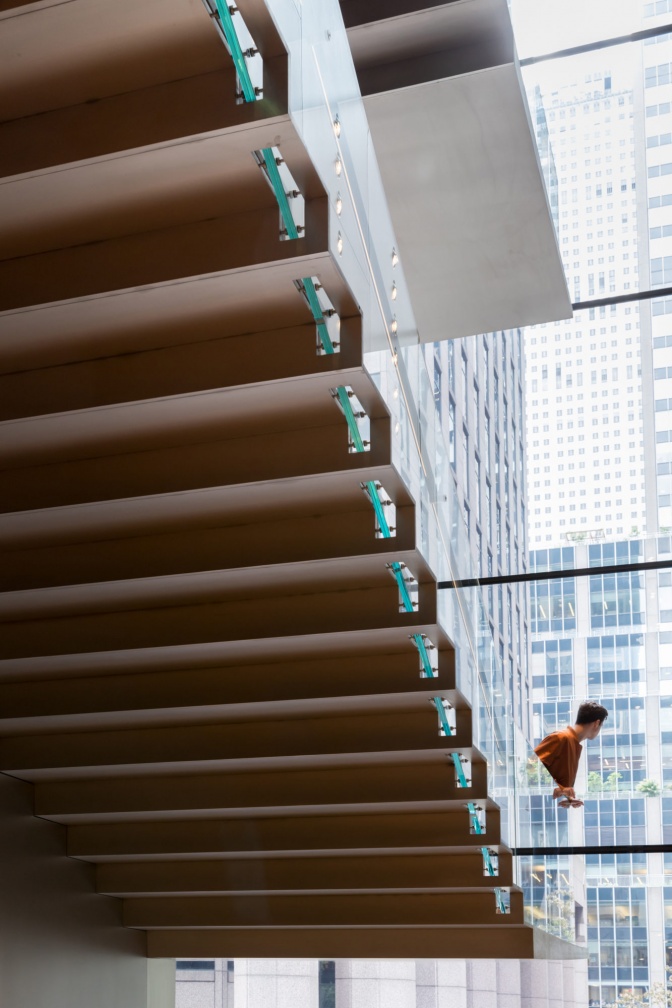 Last October, in keeping with its mission to be “the greatest museum of modern art in the world,” MoMA reopened after its most consequential renovation and expansion to date. The changes, designed by the firm Diller Scofidio + Renfro (who also worked on the Institute of Contemporary Art in Boston, The Broad in Los Angeles, and the High Line in New York City), are massive. And, at a cost of $450 million, they’re expensive. The new footprint spans the first four floors of Jean Nouvel’s supertall luxury skyscraper at 53 West 53rd, adding 47,000 square feet of gallery space. The overall effect is to lend the campus more breathing room while also preserving, with sensible modification, the museum’s original design. (The original Bauhaus staircase now starts on the first floor while a sleek new staircase, visible from the street, rises like a banner from the ground to the top floor.)

The critical response has been largely (if grudgingly) enthusiastic, daggers slipped in with the praise. Some critics have accused the “new” Modern of expanding for the sake of growth alone. The building is said to be too “corporate”—not just hard to navigate, but soulless and cold. I find it spacious, flexible, and generous in amenities (not least the new café with its outdoor terrace on the sixth floor). More importantly, though, it represents a thrilling reset of the museum’s institutional trajectory, one that finally gives women and non-European artists their due.

But go and see it for yourself. To start, pause at the new entrance on 53rd Street, where a dramatic cantilevered canopy opens onto a massive new lobby. Here a double-height hall extends all the way to 54th Street. Make your way past the ticket counters and coat check to the Sculpture Garden, where you can ride the new elevators to the fifth floor, where the heart of the collection takes you from the nineteenth century to the 1940s. (The fourth floor again shows the 1940s to the l970s, and the second the 1970s to the present.)

The first gallery—like the sixty-one others that follow—has been tastefully redesigned. It now displays “Nineteenth Century Innovators,” and Cézanne’s famous Bather and van Gogh’s beloved Starry Night have been wisely hung in a corner for crowd control. It’s followed by a gallery of early film and photography. Next comes the Picasso gallery, in which Demoiselles d’Avignon is hung cater-corner to Faith Ringgold’s 1967 troubling work Die. From her “American People Series,” it features a violent scene of a street riot. You don’t need an explainer to intuit that MoMA is no longer thinking in terms of a “master narrative of teleological development.” You see and feel it.

That feeling is only enhanced by the galleries that follow. There’s “New Expression in Germany and Austria,” which corrects a weakness in the original conception of the museum. Another contains a range of works made “Circa 1913.” The new Geffen Wing, signaled by black-metal door frames, mixes ready-made art with urban and domestic design. Its juxtaposition of older, more famous names with newer ones offers a fresh take on seven decades of art history. Such excitement is followed by an unexpected opportunity for quiet contemplation: as long as the crowd isn’t too dense, a lovely corner gallery, specially designed to house Monet’s Water Lilies, will help you enter deeply into the painting.

In retitling the galleries, MoMA curators have explicitly tried to avoid anything overtly ideological or doctrinaire. Thus instead of the traditional “Abstract Expressionism,” we get twenty-two galleries on the fourth floor dedicated to “Expressionism.” The early rooms are dedicated to “Action Painting.” Those are followed by rooms devoted to Pop, Minimalist, and Conceptual Art. Andy Warhol’s there, as you might expect. But he’s accompanied by a host of works by women: better-known figures like Louise Bourgeois, Joan Mitchell, Hedda Sterne, Lee Krasner, Grace Hartigan, Louise Nevelson, Lee Bontecou, and Helen Frankenthaler all appear, as well as newer artists like Lygia Pape and Carmen Herrera. And in the final gallery, “War Within, War Without,” pieces by male and female artists (such as Benny Andrews, Adrian Piper, and David Hammon) work together to address the violence wrought by armed forces in Vietnam, Chile, and Sudan. The floor also houses the new Kravis Studio, a wonderfully flexible two-story space for performance, dance, music, and sound works. 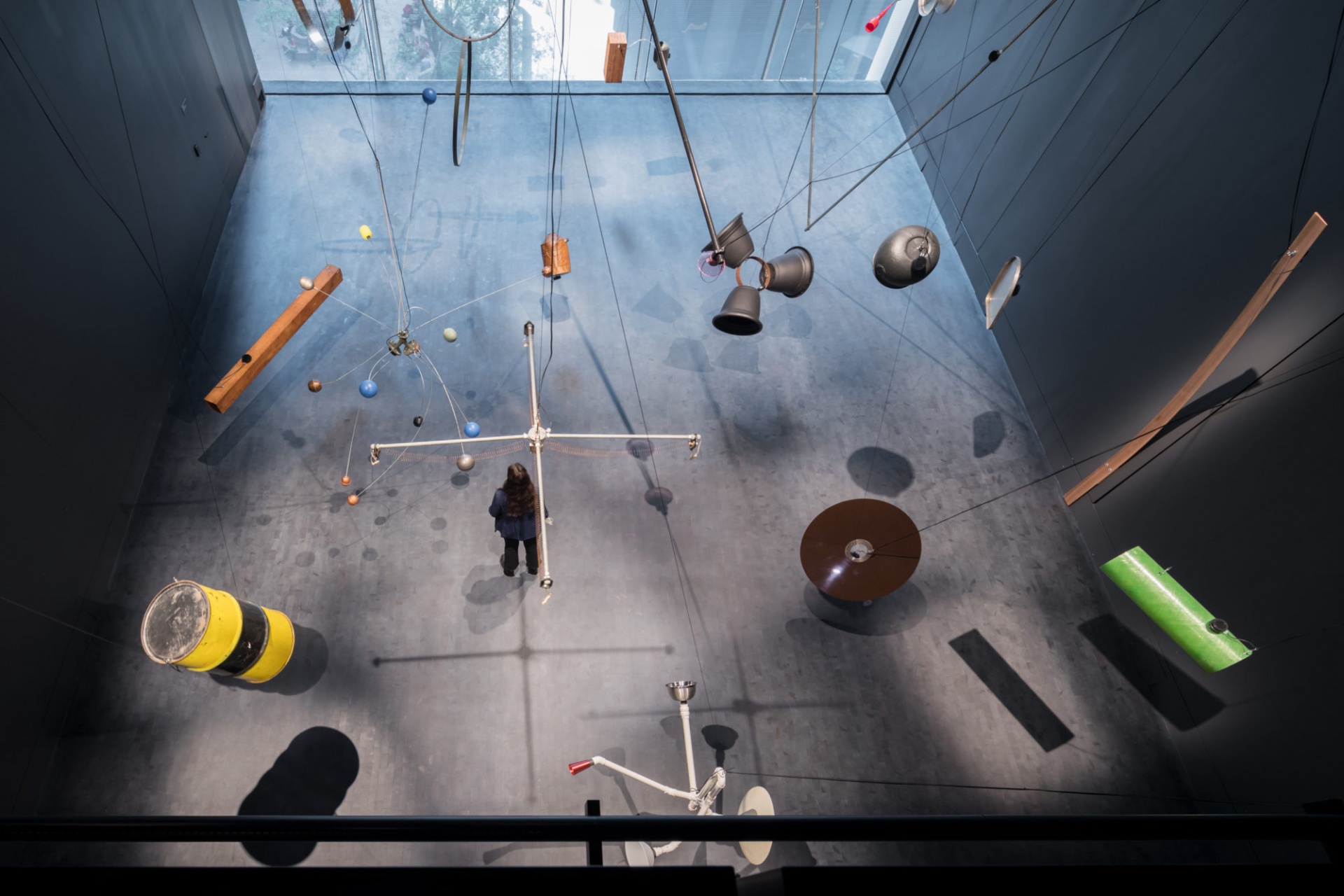 Installation View of the Marie Josée and Henry Kravis Studio, The Museum of Modern Art (Photography by Iwan Baan, Courtesy of MoMA)

Another way in which the new MoMA succeeds is its skillful blending of different media and disciplines. An important part of the museum’s mission, this interdisciplinary mixing is most striking in the sixteen galleries on the second floor—a kind of sprawling museum unto itself of contemporary art from the 1970s on.

It’s all too common in the art world to denounce the appalling influence of the international art market, dominant since the 1980s. But not all art made over the past few decades has been crassly commercial, and here the curators have managed to thoughtfully address the massive changes—political, sexual, technological—that have transformed our world in such a short time. New stars have arisen, and they use a range of forms and materials to reimagine histories large and small: there’s Cindy Sherman, who impersonates herself in endless photographic variations; Jean-Michel Basquiat, whose confessional expressionism surpassed even the popularity of Warhol; Mrinalini Mukherjee, from India, whose massive sculpture of a female fertility deity, Yakshi, is woven from dyed hemp; and Huang Yong Ping, who subtly dissects the Tiananmen Square massacre with his neocolonial Palanquin.

Here the curators have managed to thoughtfully address the massive changes—political, sexual, technological—that have transformed our world in such a short time.
sharetweet

If personal subjectivity and global ethics remain abiding themes throughout the rest of the contemporary galleries (just visit Lynn Hershman’s Complete Electronic Diaries, Chen Zhen’s Un Village sans frontières, or Julie Mehretu’s Empirical Constructions), so too does the idea of art for art’s sake.) For me, no gallery here quite equals the one that contains Richard Serra’s Equal. Completed in 2015, it’s a stunning assemblage of eight forged steel boxes, stacked in pairs. Each weighs forty tons and measures eleven feet tall. Nowhere else in the museum are you more forcefully invited to stop and attend to the marvelous materiality of the world, as Equal underscores your own transient presence within it.

Director Glenn D. Lowry has made it clear that going forward the Modern will emphasize its permanent collection. Especially exciting is the plan, to be led by chief curator of painting and sculpture Ann Temkin, to rotate and reinstall fully one-third of the collection galleries every six months. What better way to communicate MoMA’s conviction that there is no single or complete history of modern and contemporary art? That means that by next year we will have another, entirely reimagined presentation of the museum’s incomparable collection.

Mr. Lowry calls the Museum of Modern Art “a work in progress.” And with this latest expansion, we gain a new appreciation for what “modern” really means: for grandeur the stuff of daily life; for elegance the friction of varying visions; for permanence the promise of renewal. We also get a bold new understanding of the very concept of a museum. The Museum of Modern Art is no longer simply a treasury of the past, but a site of encounter with the world as it’s being reimagined now: democratic, dynamic, and fluid, lovingly shaped by a new crop of young, cosmopolitan artists.