The United States is hit by another wave.
By Isabella Simon
Coronavirus
Domestic Affairs 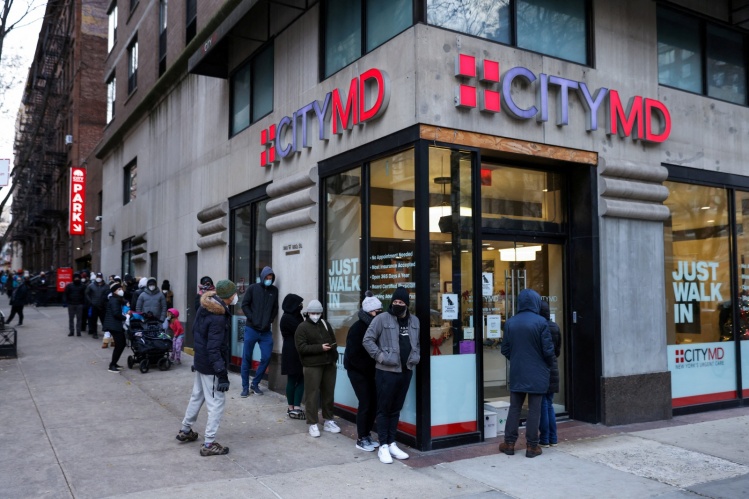 As 2021 comes to a close, cases of the Omicron variant of the coronavirus are doubling every two to four days. Already, it is the dominant strain of the virus in the United States. Omicron has greater transmissibility than previous variants (it is estimated to be two to three times more contagious than Delta) and is showing relative resistance to vaccines. While two doses of a Pfizer or Moderna vaccine provided extremely strong protection against earlier variants, that protection is reduced to about 30 to 35 percent against Omicron.

Still, there are causes for hope: a booster shot raises vaccine effectiveness to 75 or 80 percent, and for those who have received only two shots or have recovered from previous  infections, the probability of Omicron causing severe illness, hospitalization, or death seems relatively low so far. Omicron may be able to evade the antibodies that prevent infection from occurring, but it can still be targeted by T cells—the immune cells that destroy already-infected cells—produced by vaccines or earlier infections. This helps explain why so many breakthrough cases have resulted in comparatively mild symptoms. It’s tempting to imagine a future in which COVID-19 becomes endemic in this form: an illness no worse than the common cold or mild flu, something that might be annoying and inconvenient but won’t require ten-day quarantines, the cancelation of travel plans, or widespread disruption of academic calendars and public events. Tempting, but New York Times science journalist Carl Zimmer calls it “wishful thinking” to be dismissive of Omicron or to be certain that all the new data we collect will confirm that this variant will always prove mild.

Millions of people in the United States remain unvaccinated and therefore still vulnerable to serious illness and hospitalization. They also continue to put other people at risk.
sharetweet

Indeed, even if the combination of T cells, booster antibodies, and natural immunity make this variant significantly less deadly to a large portion of the population, the sheer number of new infections will inevitably put more pressure on hospitals, perhaps even overwhelming health-care facilities and frontline workers just as previous waves have. And millions of people in the United States remain unvaccinated and therefore still vulnerable to serious illness and hospitalization. They also continue to put other people at risk, even those who’ve gotten their shots, and especially the elderly (one in one hundred Americans over the age of sixty-five has died from COVID-19, accounting for about three-quarters of the total death toll in the United States). Despite the best efforts of the Biden administration and the medical establishment to emphasize the importance of life-saving vaccines and boosters, there remains a sharp partisan divide on vaccinations as misinformation continues to spread and take root, primarily in Republican communities and often thanks to amplification by elected officials. According to NPR, 94 percent of Republicans believe one or more falsehoods about Covid vaccines, and 40 percent remain unvaccinated, compared with less than 10 percent of Democrats.

Promising results from trials of Pfizer’s anti-viral pill suggest it could be a valuable tool for saving lives in the future, and it is expected to receive emergency-use authorization from the FDA. But even with that authorization, Pfizer doesn’t have the capacity to produce enough pills to address the expected spike. Andy Slavitt, former senior pandemic advisor to President Biden, predicts this wave “will peak in the middle of January,” but anticipates it will “start to go down very quickly.” Even if this is true, we must encourage and expand the use of tools we already have at hand. Though the administration’s vaccine mandate for companies larger than a hundred people has stalled in the courts, companies and institutions should still require vaccines. Individuals should get vaccinated and boosted. And Congress should appropriate more money for at-home testing, to make such tests free and widely available. Omicron has already shown it can’t be stopped, but its worst effects can still be mitigated. And maybe we’ll be better prepared if another wave comes.