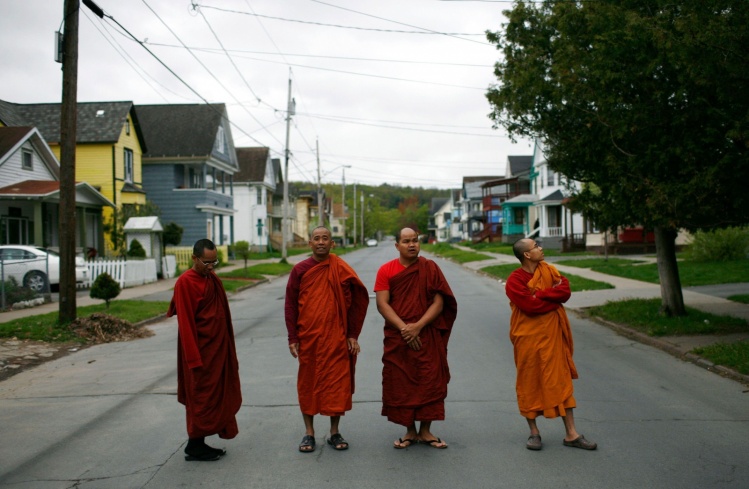 The “three newcomers” in Susan Hartman’s intimate, powerful new book are Sadia, an outspoken, effervescent high-school student from Somalia; Mersiha, a talented, ambitious chef from Bosnia; and Ali, a reserved, devout translator from Iraq. They have made their arduous way to the “dying American town” of Utica, New York, which became “a refugee magnet by accident” in the 1970s, when a local resident partnered with Catholic Charities in nearby Syracuse to resettle hundreds of Amerasians from Vietnam.

First and foremost, City of Refugees reminds us how important small and mid-size cities are to the American fabric and future. When it comes to twenty-first-century industry and assimilation, L.A. and New York—nations unto themselves, really—have their role to play. Places like Utica—Dayton, Buffalo, Youngstown—have a different, though no less essential, job to do.

Hartman’s portraits are extraordinary, at times poignant, at other times unsettling or shocking, since her subjects carry with them immense traumas. At fourteen, Sadia’s mother was “fleeing civil war, running toward the Kenyan border…two months pregnant.” Mersiha’s husband, meanwhile, felt it was merely “a question of time before (I was) killed,” following the 1995 slaughter of thousands at Srebrenica. And Ali’s translation work for the U.S. military once earned him a menacing note tucked into an envelope containing “two AK-47 slim-tipped bullets.”

These refugees bear painful baggage, but they also bring the kind of energy and ingenuity earlier immigrants drew upon to make Utica a vibrant industrial town in the 1950s, when the population rose to around 100,000. But then industries began to downsize or collapse. “We started to hear about dads being laid off,” recalls prominent public-opinion pollster John Zogby, the Utica-born son of a Lebanese immigrant. By the 2000s, the city’s population had dwindled to 60,000, with immigrant “newcomers mak[ing] up about a quarter of Utica’s population,” according to Hartman.

What can Utica—and the “life” that Mersiha, Sadia, and Ali breathe into it—teach us in our jittery, post-industrial age? City of Refugees is more a human portrait than a policy paper. Still, there are clear indications that local governments can and should cultivate immigrant contributions—an eminently sensible suggestion, though one complicated by America’s acute case of immigration schizophrenia. On the one hand, we lionize the hardworking immigrants trying to achieve the American Dream; on the other, they’re reviled as a drain on public resources.

The sight of Sadia and nearly twenty Somali Bantu relatives living under one publicly-subsidized roof, or newly-arrived Muslims converting an old Methodist church into a “soaring mosque” might personify the American Dream for some. But it scares the star-spangled pants off others. “Every refugee,” Hartman writes, “accesses public assistance,” and is also given a furnished apartment, thanks to federal and state money overseen by a local nonprofit. This is easy fodder for xenophobes, and we don’t hear much about such challenges in City of Refugees.

These refugees bear painful baggage, but they also bring the kind of energy and ingenuity earlier immigrants drew upon.
sharetweet

It would be refreshing to discover that a “nation of immigrants” tolerance has taken hold in Utica. One local does boast that his Italian immigrant grandfather sold lemon ice treats up and down these streets. Hartman’s archival research confirmed that Sadia’s home was “owned by a succession of families since the 1920s: native Uticans, Italian immigrants, then Bosnian immigrants, reflecting the changing makeup of East Utica.”

In the end, though, we can’t ignore the fact that Hartman’s “newcomers” have settled in an angry nation tearing out its thinning existential hair, a country wracked by disagreements about its past and future. Though unmentioned, Utica’s congressional district voted for a certain wall-building, Muslim-banning presidential candidate in 2016. And again in 2020.

For what it’s worth, this is not new. Smaller cities across the industrial Northeast and Midwest were very receptive to the anti-Semitic, anti-Catholic overtures of 1920s nativists. “Klan Posters Conspicuous,” reads one New York Timesheadline from October 1926, over a story filed from Utica.

Hartman does spend some time exploring twenty-first-century conflicts. Ali’s girlfriend questions the “separation between the sexes” at the local Islamic center. We learn that Ali supports Donald Trump. Hartman also highlights tensions between immigrants and some local African Americans, who feel “the refugees have been given opportunities—and support—not available to them.”

Readers inclined to (proudly, virtuously) sympathize with Hartman’s subjects must also accept the fact that such folks—and their children and grandchildren—are not likely to be multigenerational political progressives. Many past immigrants and their children eventually voted with paranoid nativists, mainly because of broader, emotionally charged issues such as crime or anti-communism. Similar shifts in this generation of immigrants are already underway. To wit: Trump not only twice won Utica’s congressional district, but his Democratic opponents garnered an uninspiring 40 percent of the vote in both presidential elections.

All of this deserves more attention in City of Refugees, and such analysis would help to show how Utica fits into a broader regional or national story. This might have pushed Hartman’s book closer to the lofty heights of her genre set by the likes of J. Anthony Lukas’s Common Ground or Adrian Nicole LeBlanc’s Random Family.

Catholic immigrants and their descendants could especially benefit from a clear look at their own history. As part of a lawsuit, filed in March, the conservative group CatholicVote argued that “American Catholics deserve to know the full extent of the U.S. government’s role in funding and coordinating with Catholic church affiliated agencies at the border.” In other words: Are you now, or have you ever been, complicit with the various forces threatening American civilization?

Hartman’s City of Refugees deftly undermines the baseless paranoia of all of this. The book may not change the tenor of our nation’s messy immigration debate, but it should—and it could, if people (starting with angry Christians) would stop screaming and just look and listen.

If they did, they’d see Sadia struggling through her final high-school days. They’d marvel at Mersiha’s riveting, inspirational journey from war-torn Bosnia to Croatia, from Cake Boss fanatic to whirlwind entrepreneur. All the while, she is raising a son, who she hopes will become “a doctor or go into cybersecurity…an expanding and lucrative field.” The son, of course, has different plans. Immigrant parents might struggle to accept this, but they also know this is one of the reasons why they set off on their journeys, and put in eighty-hour weeks making pastries or selling lemon ice. There’s an important rule immigrants generally follow, wherever they come from. As Mersiha puts it: “I always work, work, work.”

Tom Deignan, a regular contributor to Commonweal, has written about immigration and history for the Washington Post and the New York Times. He is currently researching a book about Ellis Island.