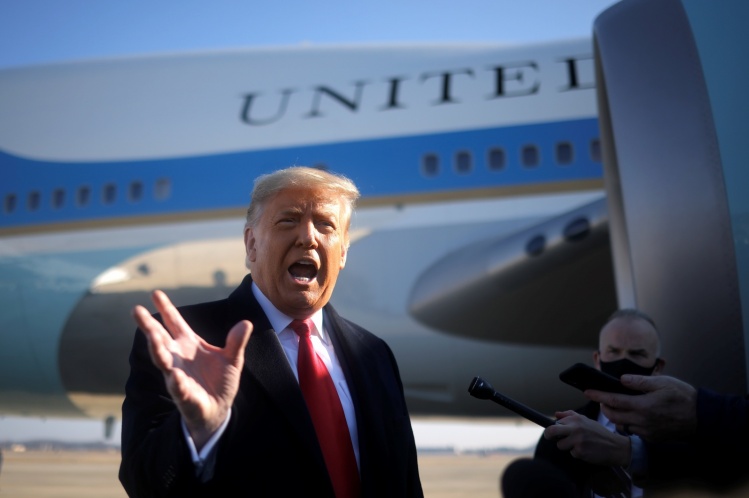 Among politicians in this respect, Donald J. Trump has been an outlier or, one might say, an out-liar. It isn’t only the number: more than 30,000 in four years, according to the Washington Post. It is the brazenness, the casualness, the unembarrassed repetition in the face of contrary evidence. He lies as freely as he insults, often at the same time. From the moment I first watched him perform in a Republican presidential primary, this willingness mesmerized me. Was lying a kind of sport for him, the more spectacularly played the better?

Finally I began to suspect that lying as such meant nothing to him—because truth meant nothing to him. He was post-modernism ad absurdum, not from the academic left but the political right. Truth and falsehood, like his personal relationships, were purely, as everyone said, “transactional.” Whatever served his purposes was true, whatever did not was false. All the better if he could latch onto, or imagine, or create, some external source, no matter how dubious, as confirmation: Sean Hannity, Fox & Friends, or, in his favorite formulation, whatever “a lot of people are saying.”

When politicians lie, we do our best to catch them out, to reinstate the truth, to replace them in office with someone who tells the truth or lies a little less. All this goes on under the umbrella of free speech. Up to a point.

In Bill Clinton’s case, that point was reached with lying under oath about sexual encounters with a White House employee. He was impeached but not convicted. That point was surely reached when Trump embarked on a full-bore, systematic, concerted campaign of lies to overturn the election of Joe Biden to the presidency. That campaign culminated in the riotous invasion of the Capitol to disrupt Congress’s formal counting of electoral votes on January 6.

But what if it had not? It is absolutely astonishing how many people in positions of political, cultural, economic, and moral leadership refused to take seriously what Trump was doing until it turned into violence. For more than two months, from his White House office, Trump was attempting to reverse an election and seize power. He was embarked on doing exactly what he accused his opponents of doing: stealing an election and exercising a coup.

He was doing this with the active aid of accomplices like Rudy Giuliani and a team of hired lawyers, and with the less visible support of family, staff, and fundraisers. Day after day, tweet after tweet, a toxic miasma of lies seeped out of the Oval Office into the courts and the media. Republican leaders who knew very well what was going on refused to clear the air. They offered sanctimonious alibis. “President Trump is 100 percent within his rights to look into allegations of irregularities and weigh his legal options,” Mitch McConnell solemnly declared. Others did the same, carefully choosing their words like potential witnesses tiptoeing around a murder victim while trying to look the other way. Some did much worse, gleefully endorsing absurd theories of election fraud or signing onto shameless legal maneuvers.

Two things have been said to mitigate such acts of aiding and abetting the Big Lie, and they both reveal the numbing power of the previous 30,000 lies. Some of those mealymouthed pieties about the president’s right to assure the integrity of the election, in the face of stark evidence that he was attempting to do exactly the opposite, stemmed from the advice of unbiased sources like Ivanka Trump and Jared Kushner: the poor man just needed a little time to cool down. And some of the hypocritical endorsements for endless investigations of fraud claims cynically assumed that these claims were nothing but politics—Trumpian politics—as usual. Both reactions reveal how far we’ve sunk. Playing games with doubts about the trustworthiness of our presidential election had now become acceptable therapy for the pathological narcissism of a mentally distraught president.

Playing games with doubts about the trustworthiness of our presidential election had now become acceptable therapy for the pathological narcissism of a mentally distraught president.
sharetweet

That Trump’s Big Lie, by contrast, was only a political gambit was not implausible. But only? It was, after all, only eroding a foundation of democracy, the citizenry’s confidence that they were being governed by the consent of the people.  Still, his claims were so preposterous—that, for example, he not only won but won in a landslide, by 400,000 votes in Georgia alone, of which he needed to “find” only 11,780—that they hinted at a ruse. Even Trump can’t really believe that, I imagined. No, I thought, he is simply planting seeds of a comeback, the myth of a stolen election to undermine Biden’s presidency, the way the “stab in the back” myth undermined the Weimar Republic.

That in itself would constitute a despicable crime against democracy and the Constitution Trump had sworn to defend. But could he really entertain the idea of holding on to the presidency? Well, who knows what’s really in this troubled man’s mind, with its buzz of illusions, insecurities, hyperbole, hucksterism, resentments, and self-adulation? What are his real aims, what are possible windfalls? Who really knows, including himself? Yet as the Big Lie campaign drummed on relentlessly, it became inescapably likely that Trump was playing for keeps.

Will his defense team convince us that all this was nothing but the exercise of free speech? How will it address the popular formula for the limit of free speech: “You can’t shout fire in a crowded theater”? The source of that formula, of course, is Oliver Wendell Holmes Jr. “The most stringent protection of free speech would not protect a man falsely shouting fire in a theatre and causing a panic,” he wrote. “The question in every case is whether the words used are used in such circumstances and are of such a nature as to create a clear and present danger that they will bring about the substantive evils that Congress has a right to prevent.”

Holmes was writing in Schenck v. United States, one of a number of World War I sedition cases, and he quickly backed away from what he considered misuses of the “clear and present danger” standard. Eventually the court came to favor another formulation, “imminent lawless action,” though it did not require that the speaker have “specific intent” to cause that action.

That Trump was falsely shouting fire in a panic-prone theater is manifest. He first did his best to make people panicky by ominous pre-election warnings that the election would be rigged, and then he embarked on a post-election campaign—starting with his demand that vote-counting cease—to insist that it had been.

Nor was Trump simply “a man” creating panic; he was, as the First Amendment advocate Lawrence Tribe pointed out, the Fire Chief! Nor was the present danger or lawless action at issue limited to the death and injury stemming from a panic or an invasive mob, terrible as that proved to be; it was the much grander attempt to overturn an election and illegally hold on to the presidency of the United States by pressuring, enticing, browbeating, and stampeding election officials, courts, state legislators, and, finally, Congress. It is astounding that the full gravity of this action still escapes observers who try to obscure it by complaining about cancel culture or the reprehensible looting of retail stores that marred last summer’s racial justice demonstrations.

The impeachment managers from the House of Representatives will doubtless emphasize the horrifying spectacle of violence at the Capitol on January 6 and the inflammatory speech that triggered it. Fortunately, their eighty-page brief also chronicles the calculated Big Lie campaign that led up to it. Those lies were not protected free speech. They were high crimes.