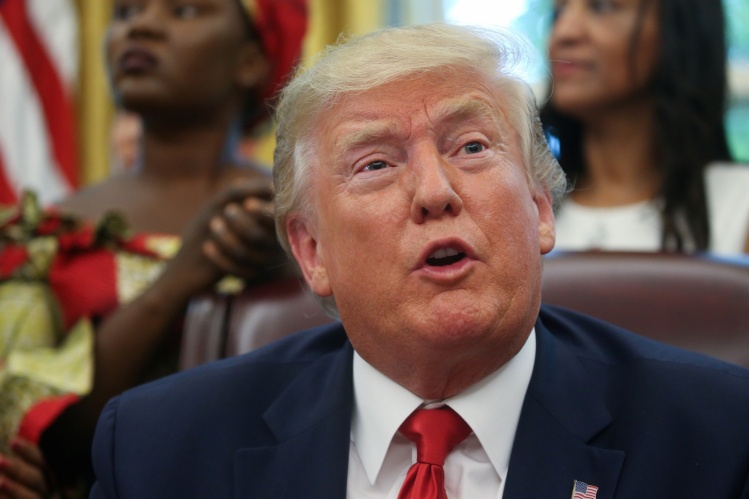 We now know the truth: President Trump asked the leader of Ukraine to investigate the man who was widely seen as his strongest potential opponent during a phone call in which he noted that “we do a lot for Ukraine.” He threw an invite for a White House visit into the bargain.

Let’s say this as simply and clearly as possible. Trump was using the inducement of American taxpayer dollars to get a foreign power to intervene in our politics on his behalf. That he didn’t specifically mention aid in the readout of one phone call the White House released Wednesday doesn’t change the message he was sending. Trump was subordinating our country’s national security interests to his selfish needs. He was willing to do anything to smear Joe Biden. And he was happy to offer up the services of our own Justice Department to advance the effort.

Trump spoke to Volodymyr Zelensky (“do us a favor,” the president said at one point) as if the newly elected foreign leader were the chairman of a planning board who could grant a variance for a Trump building project or a New York politician who could approve a tax break.

“There’s a lot of talk about Biden’s son, that Biden stopped the prosecution, and a lot of people want to find out about that,” Trump said to Zelensky, according to a rough White House transcript of the call. “So whatever you can do with the Attorney General would be great.”

It needs to be said often that there has been no credible charge that the former vice president did anything untoward when his son Hunter worked for a Ukrainian energy company. As The Washington Post’s Aaron Blake wrote Tuesday: “Ukraine’s current prosecutor general told Bloomberg he had no evidence of anything illegal or corrupt by either Joe or Hunter Biden.”

This is the kind of Trump hit job with which we are now depressingly familiar. No matter whom you favor for the Democratic presidential nomination, it’s an outrage that Biden is being hurt by reports of Trump’s own lawlessness.

There is nothing positive for Trump in the readout, which ratified House Speaker Nancy Pelosi’s decision to open a formal impeachment inquiry.
sharetweet

There is nothing positive for Trump in the readout, which ratified House Speaker Nancy Pelosi’s decision to open a formal impeachment inquiry. “It’s interesting that the White House would release this thinking it would help the president,” Rep. Tom Malinowski, D-N.J., said in an interview. “They’re so far down the path of corruption that they wouldn’t see how it implicates the president.”

It was, by the way, hard to miss that Zelensky told Trump: “I stayed at the Trump Tower.” Zelensky was clearly well-briefed that Trump cares mightily about his economic interests, too.

That the Ukraine allegations abruptly and fundamentally altered the politics of impeachment means that House Democrats need to act in a precise, expeditious and disciplined way. Battles over who has jurisdiction over what, lengthy arguments over what should and should not be included in the articles of impeachment, personality clashes—none of these should complicate action on what is now a clear-cut case involving a deplorable abuse of power.

This is why many swing-district Democrats who had been reluctant to endorse a path to impeachment are now open to acting. “If I had never heard the words ‘Mueller report’ in my life, I would have had concerns about these current allegations,” Rep. Abigail Spanberger, D-Va., who represents a district Trump carried in 2016, told me. “They are concrete allegations that are clear abuses of public trust, clear abuses of power. If true, these allegations are deeply, deeply damaging to our country.”

Rep. Chrissy Houlahan, D-Pa., another first termer, said the Ukraine story “encapsulated all the things I was concerned about with this presidency.”

Malinowski—who in May became the first swing district freshman to call for an impeachment inquiry—said that while he believes that Trump had committed other impeachable acts, the effort to involve a foreign leader in our domestic politics is “an act that any patriotic American would agree is beyond the pale.”

“The more focused this can be,” Malinowski added, “the more likely it is to unify the country, and the more rapidly we can conclude.”

This new clarity of mission is why Pelosi’s announcement Tuesday came as such a relief. Democrats on both sides of the impeachment question were never in doubt about the depth of Trump’s venality, but they did not expect him to hand them so much ammunition to make their case. They dare not let internal politics get in the way of performing their duty.