The Most Catholic of Catholic Families 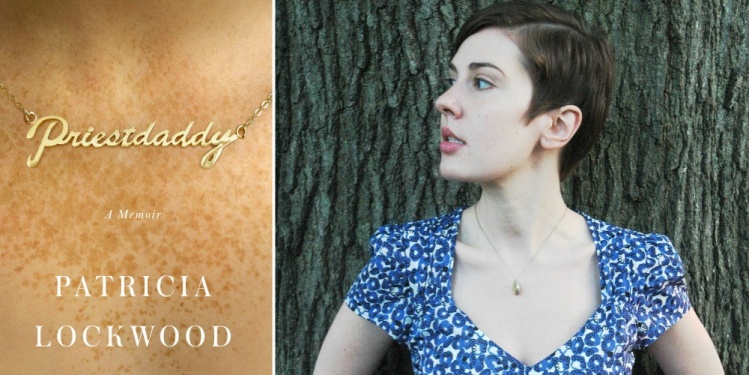 A danger of having a priest for a dad: he just might write a homily about you. At nineteen, shortly after running away with a man she met on an online poetry forum, Patricia Lockwood found herself sitting in church one Sunday, listening to her dad preach a homily titled “The Prodigal Daughter.”

Lockwood took it in stride. “At the time my reaction alternated between embarrassment and amusement, but now I see it must have been prophetic,” she writes in her memoir, Priestdaddy. “All these years I have been tending the pigs of liberalism, agnosticism, poetry, fornication, cussing, salad-eating, and wanting to visit Europe, but I am back home now, and the pigs can't come with me.”

Twelve years after she first leaves the rectory, a series of misfortunes leaves Lockwood and her husband, Jason, jobless and broke. With nowhere else to go, the couple pack up their belongings and move into the Kansas City rectory shared by Lockwood’s mother, Karen, and her father Greg, a Roman Catholic priest.

Lockwood’s situation is improbable in a lot of ways, the least of which is having a married Catholic priest for a father; as she puts it, the mercy of the church “exists for me on this earth in an unusually patriarchal form.” And although she never attended college, Lockwood has published poetry in The New Yorker and the London Review of Books, amassed over sixty-seven-thousand Twitter followers, and earned a significant cult following for her dark, subversive sense of humor.

Lockwood had previously published two books of poetry, Balloon Pop Outlaw Black and Motherland Fatherland Homelandsexuals, but living with her parents inspired her to try a new writing project: recording life with her irrepressible and quirky family. The result is Priestdaddy, a wry, observant, and funny—if ultimately uneven—account of growing up in possibly the most Catholic of Catholic families.

Born in Fort Wayne, Indiana, Lockwood was raised in “all the worst cities of the Midwest,” moving each time her father was assigned to a new parish. In an interview with the New York Times Magazine, Lockwood recalls living in five different rectories and attending six different schools. Growing up, her life (unsurprisingly) revolved around the Catholic Church. She sang in a choir and attended a youth group called God’s Gang that was “40 percent shag carpet and 60 percent Bible verses.”

After a whirlwind internet courtship, Lockwood’s husband Jason proposed to her in the parking lot of a Kroger’s grocery store (“the most matrimonial of all grocery stores”) the first time they met in person. They spent the next twelve years roaming the country while Jason worked as a newspaper editor and Lockwood wrote poetry. After she left home, Lockwood also quietly left the Catholic Church. “It was like forgetting a language you spoke a long time ago, when you were a child,” she says. During the eight months they live in her father’s rectory, Lockwood is thrown out of the bohemian, free-wheeling life she and Jason created for themselves and back into a world where dinner with the bishop is the social event of the month.

Lockwood is in a unique position to rediscover this world, and she generally does so with astuteness and a wicked sense of humor. She hasn’t forgotten the language of her former homeland so much as “turn[ed] it inside out, repurpose[ed] it, and occasionally use[d] it to tell jokes.” Her poetry experiments with explicit sexual humor and religious imagery, but Priestdaddy is more concerned with rediscovering a world Lockwood chose to leave, and finding her new place in it. Back again in that world, Lockwood reexamines her upbringing, her family, and her former church. She treats her eight-month stay in the rectory as an anthropological mission of sorts, reexamining the terrain of her childhood. “Everyone gets a window. This is what mine looks out on,” she writes.

Priestdaddy jumps seamlessly back and forth between past and present. Memories from the author’s Midwestern childhood are interrupted by sketches of daily life at the rectory: Karen reading about demonic rosaries on the internet or Greg playing his electric guitar with a tone-deaf enthusiasm that “sounds like a whole band dying in a plane crash in the year 1972.”

According to his daughter, Fr. Greg doesn't have a conversion story; he has an “origin story,” like Superman or Batman. This tells you everything you need to know about Greg Lockwood and his larger-than-life personality. Greg met Karen in high school, married at eighteen, and joined the Navy. Onboard the nuclear submarine the USS Flying Fish, he experienced what he calls “the deepest conversion on record.” His daughter attributes his conversion to the seventy-two times the crew watched The Exorcist over the course of the patrol. “You're a drop of blood at the center of the ocean…. All of a sudden you look up at a screen and see a possessed twelve-year-old with violent bedhead vomiting green chunks and backwards Latin,” Lockwood writes. “You would convert too, I guarantee it.”

His daughter attributes his conversion to the seventy-two times the crew watched The Exorcist over the course of the patrol.
sharetweet

After a stint as a Lutheran minister, Greg converted to Catholicism and applied to Rome for a dispensation to become a married Catholic priest. With some historical exceptions, the Catholic Church has maintained a tradition of celibate, unmarried priests for more than a thousand years. In 1980 that changed somewhat when Pope John Paul II established a provision that permitted married Protestant ministers to convert and become Roman Catholic priests. Almost three decades later, Pope Benedict XVI created the Personal Ordinariate of the Chair of Saint Peter to provide a structured system for these ministers. (It was then-Cardinal Joseph Ratzinger who granted Greg Lockwood an exemption to become a married Catholic priest.) But Priestdaddy isn’t concerned with the intricacies of canon law. “When the patriarch of your family is a priest, it can be difficult to tell what is church and what is not,” Lockwood writes. This is the legacy explored in Priestdaddy.

As a married Catholic priest, Greg Lockwood is a rarity in the United States (a 2017 article in the Los Angeles Times estimated that there are about 120 married Catholic priests in the United States). Unfortunately, his daughter fails to give a real sense of what Greg is like as a priest. Instead, she offers scenes of him as a classic dad, taken to the extreme. He cooks a pound of bacon for a single breakfast, watches action movies at top volume, and lounges about the rectory in a pair of ratty boxer shorts. When Jason first meets the Lockwood clan, Greg bounds out the front door of the rectory and tries to intimidate his daughter’s new boyfriend. “Gimme your license,” Greg says. “I got cop friends!”

It’s a scene characteristic of Greg’s flair for drama and of his daughter’s sharp sense of humor. Her love of absurdity finds a perfect subject in the antics of her large Catholic family, and her deadpan observations are peppered with perfect details. For instance, Lockwood’s older sister drives her six kids around in a party van that formerly belonged to an “up-and-coming St. Louis rapper” because “modern vehicles are no longer built with Irish procreative capabilities in mind.” (As a final insult, the van is now plastered with Catholic radio bumper stickers.)

By the second half of the book, Priestdaddy’s fast tempo starts to falter. Greg vanishes from the action, and Lockwood picks up different threads of her story and drops them before they can be woven into a coherent whole. Several serious events—a rape, a suicide attempt—are brought up briefly and then not mentioned again. While still humorous, her final chapters feel more like related vignettes than a unified narrative.

What does emerge, however, is a clear-sighted portrait of how Greg’s vocation has affected his wife and children. Lockwood describes the family rectory she lived in as a teenager: “It was hard to be in love there, to experiment with my hair, to put posters up on the walls, to dot my i’s with hearts…. I lacked the courage or the knowledge to invent a self.” Karen, whose work at the rectory often goes unnoticed or unappreciated by visiting priests, is hit hardest by the family’s situation. She confides to her daughter that the toughest part of being married to a priest is that “she must float from place to place; the bricks are never hers and she is never home.”

Yet Lockwood never lapses into bitterness or spite. A chapter on abortion is a thoughtful meditation on an issue that could so easily become a battlefield. Perhaps having a flawed, guitar-shredding Catholic priest as a dad gives Lockwood a more nuanced understanding of the Catholic Church as an imperfect, human institution. The plot may drift, but Lockwood never gives up the memoirist’s struggle to balance personal beliefs with empathy for her subjects. In the end, Priestdaddy is Lockwood’s way of “still participating in the language I was raised inside, which despite all renunciation will always be mine.”