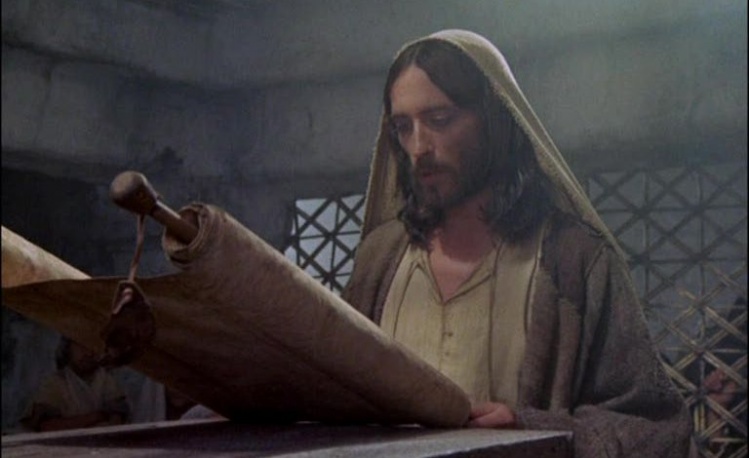 Readers of a certain age may remember the original airing in 1977 of Franco Zeffirelli's miniseries Jesus of Nazareth on NBC. It immediately became reliable, parent-approved Easter-season fare, running several times up and into the 1980s -- appointment viewing, which was the only choice in those pre-on-demand days.

It was also familiar viewing, with its magisterial theme music and earnestly emoting players, its sandals and robes and desert settings. Some predictable casting -- Ernest Borgnine as The Centurion! Rod Steiger as Pontius Pilate! -- provided another sturdy bridge from Hollywood's then-still-not-so-distant past. While the presence of Anne (The Graduate’s Mrs. Robinson) Bancroft as Mary Magdalene, Claudia (Fellini’s 8 1/2) Cardinale as The Adulteress, and Olivia (Zeffirelli's Romeo and Juliet) Hussey as Mary, the Mother of Jesus, lent a little cinephilic cred, make no mistake: this was safe, straightforward entertainment all the way. Al Pacino and Dustin Hoffman were considered for the title role, but it went to the lesser known Robert Powell, whose penetrating blue eyes, Zeffirelli and others involved in the production believed, would better match the perception of Jesus held by the American public. In fact, he looked like Eric Clapton. Our family tuned in for every episode, every year, the way you might expect: religiously.

Jesus of Nazareth still shows up now and then on cable, and it's also available on YouTube. If  you’re looking for something on the big screen, there currently are two feature films dramatizing the life of Jesus. In one, you can "experience your faith through the eyes of the child" (The Young Messiah, whose moppish title character speaks in a delightful British accent); in the other, you can "experience the event that changed the world through the eyes of a nonbeliever" (Risen, whose brooding, stubbled protagonist wields a sword). Stubbornly making do with my my own middle-aged eyes, I chose to experience things through two films that come at faith in less familiarly broad fashion: The Coen brothers' Hail, Caesar!, and the period horror movie The Witch.

Resistant to or helpless before their charms, you can at least count on Joel and Ethan Coen for consistently interesting work. But they also deserve attention for, as Francine Prose has noted, being so unusually engaged in the "ongoing exploration of how we live, or try to live, in the presence or absence of the divine." Hail, Caesar! is set in 1950s Hollywood, its protagonist (Eddie Mannix, played by Josh Brolin) a studio fixer and compulsively confession-going Catholic family-man, who regrets, among other things, not spending enough time with his family. The primary backdrop is the troubled production of one of those golden-era big-budget Bible pictures, in which George Clooney is playing a Roman centurion who will in the final reel, no spoiler-warning necessary, come with quivering jaw to see the promise of eternal life in the crucified Christ. Much has been made in reviews of Hail, Caesar! of a scene in which a Catholic priest, Protestant minister, Jewish rabbi, and Orthodox patriarch are gathered at the studio to confer a sort of ecumenical blessing on a film about the son of God; it's hilarious, not least for the accuracy of the finer theological distinctions the representative of each faith insists on making.

But it's the character of Eddie through whom the Coens more interestingly take up the mysteries of belief, and not just in the comic scenes of the confessional. Home late from his job, eating a warmed-over supper while his wife cleans the kitchen, Eddie catches up on the news of his children. Their worries about baseball tryouts and math classes have come to nothing, and he's quietly but plainly happy for them: good, it worked out okay, he says with a nod, as if a prayer has actually done its work. His natural attentiveness to the needs of those around him -- his unconditional acceptance of their weaknesses -- is what makes him good at his job, so good he finds himself being recruited by a defense firm promising far more money at far fewer hours. And in a far more serious calling than movies, says the persistent recruiter, who produces a photo of a mushroom cloud to make his point. You can detect in Eddie the barest shudder of revulsion. Succumb to the promise of limitless power, or remain among the flawed and searching? The comic, cockeyed manner in which the Coens sidle up to such questions simultaneously reveals how seriously they really think about them.

Pride and temptation are also among the concerns of director Robert Eggers’s The Witch, set in the New England wilderness of 1630. A family of devout Christians -- its patriarch professes to practice “the pure and faithful dispensation of the Gospels” -- is banished from the safety of the settlement and takes up residence alongside a dark wood. They are seen in prayer and doing the urgent, difficult work of providing food for themselves. Then a child disappears, a flash of red is glimpsed in the thick trees, livestock begin to act strangely, odd rustlings and knocks are heard. The familiar tropes of early American allegory are here, not to mention those of even older fairy tales, but this also is a surprisingly serious contemporary treatment of faith. (Watching The Witch makes clear just how dark the night was when all anyone had was a candle.) As crises mount, belief curdles, becoming a weapon to be used against loved ones or even turned against oneself: Is evil out there, or within me? The occasional jump-scare is nothing compared to what the film poses as the terrifying possibility of the latter.

Hail, Caesar! and The Witch probably won’t (and obviously aren’t meant to) become regular seasonal viewing, and many people already have their own films or series they return to at this time of year. A priest I know says he often watches Monty Python’s Life of Brian; it is, as he’s even stated from the pulpit, his favorite movie. I can see why -- it’s funny like few other movies are. It also has a direct tie to the series I remember so clearly from childhood: strapped for money, Monty Python -- instead of creating original sets -- used those that Franco Zeffirelli had built for Jesus of Nazareth. A side-by-side viewing may be in order.