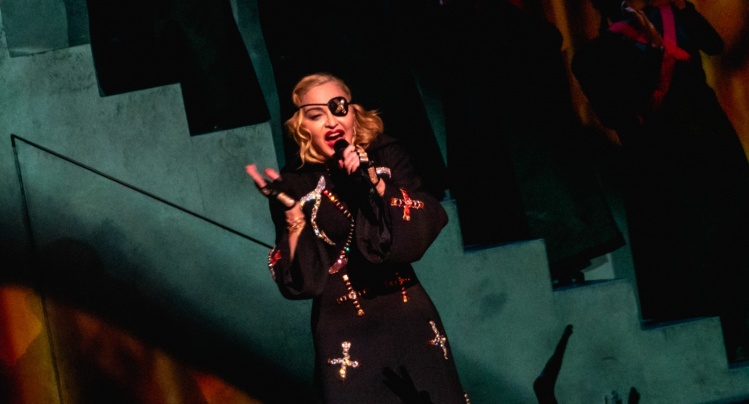 If you’re not flipping through fashion glossies for insights into the American religious landscape, maybe you should be. “Fashion history is religious history,” argues Lynn S. Neal. In her latest book, Religion in Vogue, she makes a compelling case for the claim.

Religious historians have always studied the complex interplay between image and text. Just as we can glean information about what people in previous eras believed by reading what they wrote, so too can we infer it from the pictures they’ve left on cave walls or cathedrals. It shouldn’t be a great leap, then, to do what Neal does here: she takes some of the most widely circulated image-and-text-laden artifacts produced in the last hundred years—fashion magazines—and treats them as valid sources for understanding the beliefs of the people who made and read them.

A professor of religious studies at Wake Forest University, Neal writes with a distinctly scholarly voice, clearly pitched more to fellow academics than the wider readership of the magazines she examines. But then again, the premise that grounds her analysis—that fashion is worthy of sustained attention—is one the latter group has already bought into. The former are likely to need more convincing.

At the outset of her exploration, Neal sets a few limits. She examines only American editions of Vogue and Harper’s Bazaar published between the end of World War II and the mid-2010s. Most of her attention is devoted specifically to Christianity, both because that’s the belief system at the center of American religious history, and because the world of designer fashion has historically been influenced primarily by creatives of Western origin. Still, Neal’s observations yield insights into the American spiritual landscape that go well beyond the walls of churches.

Neal’s main target is the flawed idea that fashion and religion are inherently opposed, an attitude she exposes as a relatively recent development. For those who perceive fashion as primarily concerned with surfaces and religion as primarily concerned with interiors, it may seem reasonable. But Neal reminds us that our current religious and cultural assumptions evolved through a long, slow process of sedimentation and accretion. Only by excavating our own intellectual history can we truly grasp the ways we process and internalize the portrayals of religion that surround us today.

In the 1940s, religious belief was taken for granted as the backdrop of American life and therefore for fashion, too. If magazines like Vogue intended to communicate to readers what “the good life” looked like shortly after the war, it was a life that clearly included religious engagement. Today we’d be surprised to flip open a glossy magazine at the grocery store and find leading Catholic voices; but Thomas Merton and Bishop Fulton Sheen were both published in Vogue in the past. That their spiritual reflections could sit happily alongside photos of models wearing the latest from Paris went unquestioned.

Advertising took things a step further, not just showcasing faith and fashion side by side, but actually combining them. In the ’40s and ’50s, fashion and beauty ads came to rely heavily on notions of the miraculous and the heavenly to sell products, quietly establishing the consumption of goods as a path to transcendence. The biblical character Eve figured prominently in campaigns, and even if her presence subverted the traditional narrative—in ads she became a symbol of women’s power to choose as well as to allure—it also underscored the ways in which fashion framed desire and consumption in Scriptural terms.

A faith centered on incarnation is reason enough to take the body—and what clothes it—seriously.
sharetweet

Coco Chanel, one of the most influential designers of the twentieth century, played a major role in helping religious allusions climb out of the pages of fashion magazines and onto the runway. Jewelry featuring Maltese crosses became one of her signatures, and by the 60s, cross jewelry was everywhere. In this sense, Neal argues, fashion helped people get used to seeing Christian symbols outside of church contexts. Not simply a passive reflection of the growing “seeker” mentality of the 60s, fashion played an active role in shaping religious culture, which came to emphasize individual expressions of faith over institutional participation in organized religion.

In the 1980s things evolved further, as the cross’s presence in fashion became a source of controversy. While cross jewelry had signified history and heritage in the ‘60s, its reappearance in the ‘80s had more to do with rebellion. That was due in part, Neal argues, to the rise of evangelical subculture: these Christians’ wholehearted embrace of “witness jewelry” made the cross unfashionable for non-evangelicals. Eventually cross jewelry came to be so thoroughly associated with a conservative outlook on religion and politics that pairing it with elements deemed incompatible with those beliefs became a powerful way of criticizing conservative Protestantism and Catholicism alike. Think of Madonna’s combination of a cross necklace with a low-cut dress while singing about sex.

Still, not all appropriations of Christian symbols by the fashion industry were antagonistic. Many looked to religious garb for genuine inspiration. And while some did so provocatively, others approached Christian traditions more reverentially, as in the case of the Fontana sisters, an Italian designer trio known for dressing Hollywood stars. Their il pretino (“little priest”) dress, based on a cardinal's cassock, was reportedly approved by the Vatican.

The ‘90s saw the first instances of designers incorporating traditional Christian iconography—most notably the figure of Mary—directly onto garments. Whether designers were drawn to Christian icons because they provided symbolically rich, copyright-free visual inspiration or because they found in them meaningful expressions of faith, their usage sparked a conversation among magazine readers about what constitutes authentic spirituality and what role the Church should play in shaping it. What did it mean for non-Christians to wear these clothes? How tied were these images—and their spiritual power—to their original contexts?

Ultimately, Neal’s survey leads to a few significant conclusions about how fashion has shaped the ways Americans metabolize and experience religion. Fashion, she argues, modeled how one might decontextualize religious symbols, “free[ing] these powerful relics of the Christian heritage from the theological and interpretive constraints of institutional Christianity.” It taught people to think of transcendence as something that could be accessed through material objects. Fashion tended to either romanticize Christian history as a source for beautiful and inspiring visuals, or subvert the faith by using its own symbols as critique. And in so doing, it both reflected and contributed to the growing personalization (and individualization) of spirituality for a population increasingly turned off by the Church, but still longing for sources of enchantment and meaning.

Neal’s book is not perfect; she tends to repeat herself, and occasionally comes off as too detached from her subject. In part, that’s understandable: she’s an academic writing about fashion magazines and needs to convey seriousness of purpose. But clothing is ultimately a deeply sensory medium. To write about it without having touched, worn or even seen many of the garments under discussion feels a bit off. It’s not exactly writing about food you’ve never eaten, but it’s in the same neighborhood.

But all that is forgivable in light of the uniqueness of Neal’s endeavor. Since 2013, I’ve been writing about the intersection of fashion and religion from a journalistic perspective; other than the notable exception prompted by the “Heavenly Bodies: Fashion and the Catholic Imagination” exhibition at New York’s Metropolitan Museum of Art in 2018, it’s felt like a largely solitary endeavor. There are a few exceptions, like Reina Lewis at the London College of Fashion and former Fuller seminarian Robert Covolo, but these examples don’t disprove the rule: even those who grasp the ways in which visual culture fosters and upholds religious identity tend to overlook fashion’s role in it.

If Neal’s book does nothing else, the case it makes for approaching fashion differently would be enough to render it worth reading. “In a world increasingly dominated by the visual and the continual circulation of images, fashion’s contribution to this conversation should not be overlooked,” she writes. Here’s hoping that she inspires the next generation of Christian scholars to see that a faith centered on incarnation is reason enough to take the body—and what clothes it—seriously.

Whitney Bauck is the Senior Sustainability Reporter at Fashionista. She has also contributed to the New York Times, Washington Post, and Billboard.