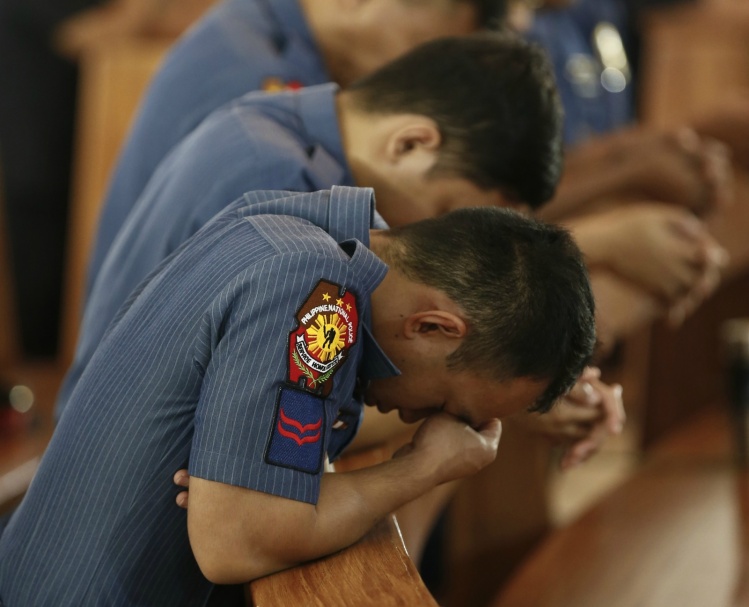 Philippine police pray during a “Day of Prayer and Penance” Mass Jan. 31 in support of President Rodrigo Duterte’s anti-illegal drugs campaign at a chapel in the police headquarters in Manila. (CNS photo/Rolex Dela Pena, EPA)

In addition to being responsible for mass murder, Philippines President Rodrigo Duterte is also a champion Catholic-basher. Since the former did not apparently perturb President Donald Trump at all on his recent trip to the country, perhaps the latter will make a difference—if not to Trump, then to some of his supporters.

Duterte’s verbal attacks on the Catholic Church range from the ridiculous to the threatening. He cursed out Pope Francis (and his mother) because he was angry about traffic jams that accompanied a papal visit in 2015. He called the country’s bishops “sons of whores” and said the church was “the most hypocritical institution.” He contended that the church was on its way to irrelevance. He accused church officials of womanizing and corruption.

In December he said the Catholic Church was “only good in collection” in responding to poverty and drug addiction issues, referring to the practice of collecting cash donations during Mass, but said the Church “would not give anything.” President Duterte also said in December he did not believe in religion, especially the Catholic Church, which he said sowed fear into the faithful about hell. He said, “Be careful about religion, it is about gold.”

His vulgar language conveys an implicit threat. “Don’t fuck with me,” he warned church leaders on one occasion. “I challenge the Catholic Church. You are full of shit. You all smell bad, corruption and all,” he said in one speech.

In a speech to police officers, the firebrand leader of one of only two majority Catholic Asian countries challenged the church to a “showdown” and threatened to expose priests and bishops for a litany of abuses.

“Most people here are Catholic. If you are a good priest, make them understand that they will die,” he said, referring to drug users.

“You criticise the police, you criticise me. For what? You have the money. You are all crazy … when we were making confessions to you, we were being molested. They are touching us. What is your moral ascendancy, religion? What is the meaning of it?”

In a country that is 81 percent Catholic—and with many of those Catholics highly devoted—the church is a powerful potential threat to Duterte, who has maintained public support even as he sanctioned the extrajudicial slaying of thousands of suspected drug dealers.

It takes courage to stand up to a mass murderer, and the bishops, in varying degrees among them, have done that.
sharetweet

The Philippine bishops have issued a number of statements that opposed these slayings, which are routinely carried out by Philippine National Police and vigilante squads with Duterte’s encouragement. Drug kingpins in China and Mexico do indeed smuggle large amounts of methamphetamines and marijuana into the Philippines, but the targets of the extrajudicial murders are low-level dealers, often in the impoverished slums of Manila. In January, the bishops wrote:

We, your bishops, are deeply concerned due to many deaths and killings in the campaign against prohibited drugs. This traffic in illegal drugs needs to be stopped and overcome. But the solution does not lie in the killing of suspected drug users and pushers. We are concerned not only for those who have been killed. The situation of the families of those killed is also cause for concern. Their lives have only become worse. An additional cause of concern is the reign of terror in many places of the poor. Many are killed not because of drugs. Those who kill them are not brought to account. An even greater cause of concern is the indifference of many to this kind of wrong. It is considered as normal, and, even worse, something that (according to them) needs to be done.

The bishops also issued an “appeal to our law enforcers” last year stating that “for purposes of Catholic morality, it is necessary to emphasize that you, as law enforcers, can ‘shoot to kill’ only first, when there is unjust provocation; second, when there is a real, not only conjectural, threat to your life or to the lives and safety of others; third, when there is due proportion between the threat posed and your own use of a firearm aimed at the threatening subject …  To kill a suspect outright, no matter how much surveillance work may have antecedently been done on the suspect, is not morally justified. Suspicion is never the moral equivalent of certainty, and punishment may be inflicted only on the ground of certainty.”

It takes courage to stand up to a mass murderer, and the bishops, in varying degrees among them, have done that. But earlier this month, a bishop who is close to the Duterte family assumed leadership of the bishops’ conference. Archbishop Romulo Valles of Davao, Duterte’s home city, reportedly said drugs should be considered a more serious problem than the killings. It is a curious thing, to say the least, for a Catholic bishop downplay mass murder.

For that is what the “extrajudicial” hits are. The U.S. State Department reported 6,204 such slayings in 2016, and the number continues to grow this year. As this description from Amnesty International indicates, it’s evil:

In his campaign against drugs, Duterte has incited people to take the law into their own hands and kill anyone suspected of being a user or a seller. “If you know of any addicts,” he told a crowd of his supporters last year, “go ahead and kill them yourself.” Prone to profanity, Duterte makes no attempt to varnish his words or conceal his intent.  “My order is shoot to kill you,” he warned alleged drug offenders. “I don’t care about human rights, you better believe me.”

The police, who are supposed to uphold the rule of law, have come to resemble a criminal enterprise. They avoid making arrests in favour of shooting suspects dead in cold blood. They manipulate police reports to make it seem the victim was resisting. Even in death, the victims are denied dignity. Evidence is planted in their homes and their possessions are stolen.

Human Rights Watch issued a study that detailed the pattern behind the slayings. It found that police reports were routinely falsified to make it appear the slayings were done in self-defense.

Duterte’s criticism of the Catholic Church is part of a larger drive to discredit any institution that may challenge his authority—something of a parallel with Trump’s approach. The State Department’s annual report on human rights notes that in the Philippines, “Individuals could criticize the government publicly or privately or discuss matters of general public interest. Civil society organizations reported, however, that President Duterte’s public attacks on individuals and international bodies who have criticized his policies had a chilling effect on free speech and expression.”

For example, the Philippines’ Department of Justice launched an investigation of a senator at the same time she had begun investigating extrajudicial killings, the report said.

The State Department also said that “Journalists faced harassment and threats of violence, including from politicians and government authorities critical of their reporting.” During his election campaign in the spring of 2016, Duterte said that “journalists should enjoy no special protections and could be `assassinated’ if they were `corrupt’ and took money from politicians … Many journalists reported an uptick in online threats, including threats of violence and harassment, in response to articles posted online that were critical of the government.”

The church of the Philippines should have the support and encouragement of Catholics in the United States, a key ally, to help it persist in serving as the conscience of its people. To treat Duterte like some sort of buddy, or to say his human rights abuses are none of our business, would be to normalize mass murder.