Housing is a human right. We should treat it that way.
By The Editors
Domestic Affairs 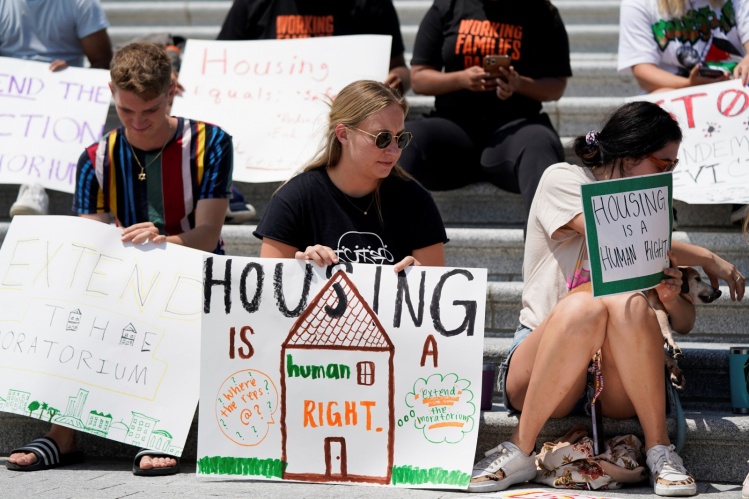 Protestors camp out on the steps of the U.S. Capitol, July 2021 (CNS photo/Elizabeth Frantz, Reuters)

From May to June of this year, residential rents across the country saw their largest monthly jump since 1986. Asking prices in the second quarter were 23 percent higher than in the same quarter three years ago. The average monthly rent in Manhattan recently passed $5,000 for the first time ever, but rents are soaring just about everywhere: Austin, Texas; Boise, Idaho; Reno, Nevada; Spokane, Washington. As coastal metropolitan areas, already notorious for sky-high rents, keep getting more expensive, smaller cities that were once assumed to be affordable (Columbus, Ohio, among others) are suddenly far less so—especially if the local job market is strong. Not coincidentally, the share of renters behind on payments, typically lower-income and disproportionately people of color, is also on the rise.

Housing experts cite a range of reasons for skyrocketing rents: higher interest rates on mortgages, which keep prospective homebuyers in the rental market; pandemic-related relocations by higher-earning professionals; a jump in the number of investor-owned properties let out as vacation and luxury rentals; not enough construction of new housing stock. In short, the demand for affordable housing in this country far outstrips the supply. This has a significant impact on the overall economy since housing costs are a major contributor to inflation. But soaring rents have a rather more direct impact on the tens of millions of Americans who are struggling to make bigger monthly payments, facing eviction, or simply unable to find a place to live. And when the price of shelter is at a premium, people cut back on other things in order to keep a roof over their heads; food, medical care, transportation, and other necessities often take a back seat. This creates additional stressors for those already burdened by housing insecurity.

Though demand for affordable housing may be high, little if any gets built.
sharetweet

There is a simple solution to the problem: increase the supply of affordable housing. But various factors—cultural, political, economic—make it difficult, if not impossible, to increase supply adequately in the short term. Among the biggest obstacles are the stringent zoning regulations that many municipalities have on the books. Though typically associated with post–World War II suburbanization, some of these date back to the 1920s, when they were often enacted as a way to keep Black people and immigrants out of “good” neighborhoods, and thus to protect property values. In tightly limiting density as well as the type, size, layout, and location of new residential buildings, such restrictions effectively prohibit the construction of affordable multiunit or multifamily dwellings in or near places where people want to live—that is, where schools are good, crime is low, transportation is convenient, and the overall quality of life is appealing. This happens to describe a number of cities and towns in coastal blue states, and indeed these are some of the places most resistant to affordable-housing proposals and most effective in preserving the status quo. From enclaves in suburban Westchester and greater Boston to the tech communities of Northern California, an increasingly well-heeled NIMBYism holds sway. Buoyed by the wealth accruing from their own homes, residents in these areas do whatever they can to limit new housing, often by means of such innocuous-sounding methods as environmental-protection and historical-preservation initiatives. Consequently, though demand for affordable housing may be high, little if any gets built (though high-end residential development continues apace). It’s hard to square this obstructionism with the progressive values many voters in these areas claim to hold.

But NIMBYism isn’t the only problem. In states where demand for affordable housing is highest and proposals have been approved, there aren’t enough construction workers to do the job—a job that also often pays less than work on high-end residential and commercial projects. Lingering supply-chain shortages and high material costs have also hampered building efforts. As for helping low-income Americans move into existing housing, Section 8 vouchers can bring the price of monthly rent within reach; qualifying families spend 30 percent of their income on rent, and the government pays the balance. The trouble is that Section 8 is not an entitlement program like food stamps or Medicaid, which anyone eligible automatically receives, and Congress simply doesn’t allocate enough money for it. Indeed, only about 20 percent of poor households receive federal housing assistance. Encouraging relocation to regions where affordable housing is more plentiful, meanwhile, means asking people to leave their jobs, their extended family, and their local friends—itself a very high price to pay.

Amid these dispiriting realities, there are some bright spots. The Biden administration has reinstated a 2013 Obama-era rule aimed at eliminating race-based zoning discrimination, which Donald Trump had suspended on taking office (and which the National Review claimed would “abolish” suburbs). Federal rental-assistance measures implemented during the pandemic could provide a roadmap for developing longer-term relief policies. There’s also the continued rise of the YIMBY (“yes in my backyard”) movement, which works in opposition to NIMBYism by welcoming the development of affordable, multiunit housing in desirable neighborhoods. What the Guardian once called a “radical solution” pushed by “angry millennials” has become mainstream, with YIMBY groups and allied politicians working on legislation to get affordable housing built in California, New York, Idaho, and elsewhere. None of these remedies is a panacea. But if we understand housing to be a human right—no less so than adequate nutrition—then we need to eliminate as many barriers to affordable housing as we can. It shouldn’t be so hard for so many people to find a place to call home.