Do Any of the Democratic Candidates Have the Right Stuff?
By Margaret O’Brien Steinfels
Election 2020
Domestic Affairs
Donald Trump 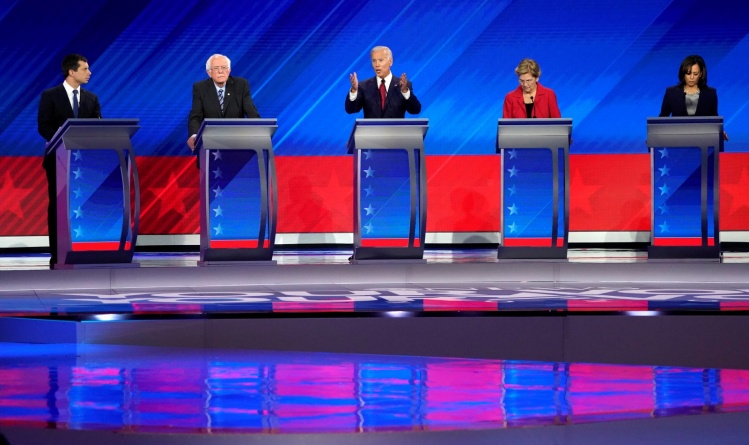 What was the Democratic National Committee thinking when they devised the twelve-debate marathon now underway? “Everybody come!” sounds democratic. But it’s beginning to look like anarchy. Nineteen, or is it twenty or twenty-four, candidates have stood on the debate stage. What do those performances and policy plans tell us about the ability to repair the damage done by the Trump administration? His successor must run the country while restoring good governance, mending regulatory infrastructure, and removing leftover saboteurs. Who is up to governing this rattled country on January 20, 2021?

Millions yearn for “anyone but Trump.” My favorites are Midwesterners Pete Buttigieg and Amy Klobuchar. Each behaves and talks like a normal person; neither has the style of a glad-handing pol. Buttigieg has made difficult choices in his life and remains a decent, serious, and modest person. Wouldn’t that be great in a president? He is inching toward the top tier in Iowa, but is still way behind the top three in nationwide polls.

I like Amy Klobuchar’s crooked smile and cool sense of humor, and I also like her defense of middle-of-the-road policies. It suggests a realism that could calm and mend our rattled and polarized society. In many quarters it is a mark against her that she has been hard on her staff (some use the word “abusive”). But maybe her tough demeanor is what’s necessary to hold people like Brett Kavanaugh to account. Both Klobuchar and Buttigieg have delivered decent debate performances but it is widely—though perhaps too easily—agreed that neither will make the cut.

Someone will get the nomination. Let’s hope whoever it is makes America OK again.
sharetweet

Each of the three front runners—Sanders, Warren, and Biden—has their appeal. Bernie Sanders has grown on me. The second time around, his rhetorical excesses have become idiosyncratically appealing: “enough is enough,” he growls. And he’s right about that! Then there’s his steadfastness; returning to the campaign trail after a heart attack looks gutsy, if it doesn’t prove foolhardy. His Brooklyn and Jewish origins lend authenticity to his hard-headed, no-nonsense assessments of the nation’s troubles—a plus in cleaning up the mess. On the other hand, those same qualities raise an important question about his ability to govern: Has he ever changed his mind? When Plan A doesn’t work—and at least some of his Plan A’s won’t—will he be able to devise a B, C, or D?

Elizabeth Warren is smart and articulate. She is way ahead in the betting parlors, but not with Democratic primary voters. She is no Hillary Clinton, though she may remind voters of a high-school civics teacher. Like Bernie, she is an ardent cheerleader for Medicare for All. But are either of them on real Medicare? Or, as senators, do they have the top-notch health insurance provided to government employees?

Joe Biden moseys along in the campaign—behaving like he’s already the winner. Myriad assaults, lapses, and misdemeanors don’t seem to disturb him. Neither do they give him a burst of energy. He is a known quantity and the favorite of many voters. Polls have shown he can beat Trump, but he hasn’t brought a lot of energy to the debate stage or his campaign. Does he have the energy for four years in the White House? Or is a lackadaisical president exactly what the country needs after four years of Trump’s incompetent intensity?

Veteran political columnist Dan Balz, assessing the October 15 Democratic debate, asks whether any of the candidates can beat Trump. “Can Biden step up and show something more than he has? Can Warren demonstrate that her proposals and campaign machine are enough to overcome reservations about her general election viability? Can a slipping Sanders rebound? Can Buttigieg or someone else who is less liberal than Warren or Sanders displace Biden?”

Who can say? Perhaps a yet undeclared candidate will jump in. Michael Bloomberg says he will if Biden drops out. Sherwood Brown, another Midwesterner, could change his mind. Will Oprah replace her guru, Marianne Williamson? Michelle Obama’s name has been bandied about. She has long said, never ever. She knows what it’s like.

Someone will get the nomination. Let’s hope whoever it is brings out enough voters to beat Trump or his successor, survives to the inauguration, becomes president, and makes America OK again.