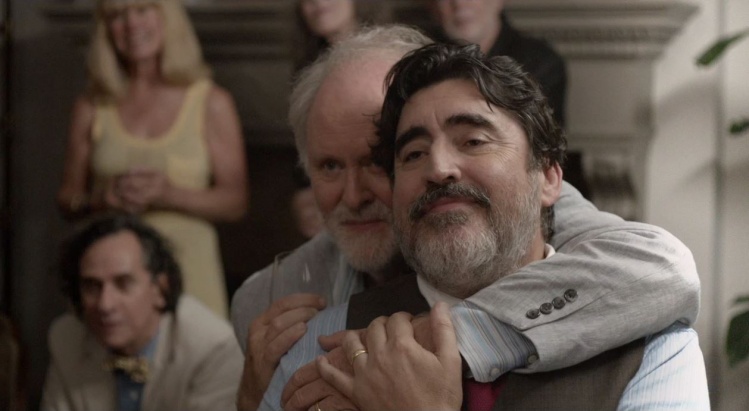 Sometimes a work of fiction can bear witness to a profound social transformation by taking it for granted. Such is the case with Love Is Strange, directed by Ira Sachs and written by Sachs and Mauricio Zacharias.

George (Alfred Molina), a music teacher at a Catholic high school in New York City, has been the lover and companion of Ben (John Lithgow), a painter, for thirty-nine years. The school’s principal and staff have long known of this and tacitly accepted it. But when the two get married in an unsplashy but nevertheless public ceremony announced on Facebook, the archbishop compels the principal to fire George for publicly defying church doctrine. The couple’s reduced income (Ben is living on his pension) forces them to sell their Manhattan apartment. While George hunts for new quarters and stays with a couple of young gay cops, Ben boards with his nephew in Brooklyn.

What’s quietly revelatory about Love Is Strange is that its creators didn’t feel the need to turn it into a social-protest document. Instead, the script takes for granted the viewer’s approval of a loving gay relationship and its right to marital benediction. After the first few scenes establish the story’s premise, the plot expands to raise themes that concern us all, regardless of sexual orientation. This is a surprisingly multifarious movie.

You might assume that Ben, being a painter, would find a kindred spirit in the novelist with whom he is lodging—his nephew’s wife, Kate (Marisa Tomei). But the loquacious Ben is, at seventy-one, well into his anecdotage, and his blather is driving the otherwise good-natured Kate crazy, especially when his grousing about the solitude he needs in order to create keeps her from typing a single sentence. Lithgow and Tomei are marvelously funny in their negative chemistry—he with his self-satisfied geniality and she with a smile tightening into a snarl.

But George’s situation is much worse. A refined and retiring man alert to the subtleties of a Chopin nocturne, he now finds himself living with guys who party all night and listen to head-banging, conversation-crushing rock. When a sympathetic party crasher asks the obviously suffering George (Molina’s battered stoicism is both pathetic and hilarious) why he doesn’t simply retreat to his bedroom, George nods toward the couch the man is sitting on: “That’s my bed.”

There is also the comedy of generational divide. While George would rather listen to his Schubert and Schumann, his young apartment-mates urge him to join them in DVD binges and board games. Dozens of their pals, gay and straight, drop in for the fun. The movie is quite shrewd about the fact that younger generations are gratifyingly relaxed about sexual orientation, but it’s also perceptive as to how group hilarity can smother solitary pleasures.

Ben’s generational problems are at first similarly comic, but they give way to more poignant conflicts. He now sleeps in a bunk bed below his fifteen-year-old nephew Joey (sensitively played by Charlie Tahan), who is a lot less shy than his parents about displaying resentment. And young Joey does have some cause for resentment: it’s embarrassing to bring a pal to your room for homework or a bull session and discover your elderly great-uncle snoring through his afternoon nap. But we also see how oldsters and youngsters can sometimes communicate better with each other than either can with the middle generation. When Joey mocks Ben’s use of one of his schoolmates as a model—“That’s so gay!”—his parents reprimand him for what they take to be a homophobic insult, but Ben grasps the new meaning the young have attached to the word: nothing to do with sex, roughly synonymous with “weird” or “stupid.”

Still, those modeling sessions with an attractive boy also evoke another of Love’s themes: the comedy of idealism mugged by reality. Though Ben displays no desire for his teenage model, Kate can’t help questioning what she calls the “appropriateness” of an adult gay man painting an adolescent boy (never mind Michelangelo, Leonardo, Rembrandt). Joey’s father is worried that Joey is spending too much time with his friend, and the worry doesn’t seem to be about possible drug use or some other delinquency. Viewers can infer that he doesn’t want his son to turn out like his uncle, despite his liberal opinions about sexuality. This is not a matter of simple hypocrisy on the part of Joey’s parents; it’s about complicated, deep-seated, and largely unconscious fears that can’t be easily set aside, however much the couple may want to be on the side of progress.

With happy irony, it turns out to be Ben rather than one of the hovering parents who sets the sexually uncertain Joey firmly on the path to discovering his true sexual nature. That he turns out to be a likely heterosexual compounds the irony. Yes, love is strange.

The chief strangeness and central irony of this excellent tragi-comedy is that the public affirmation of devotion that the old lovers display by getting married becomes the very thing that divides them during what should be the poignantly happy twilight of their relationship. The closing scenes of this movie, especially the unforgettable shot of Ben descending into a subway station after kissing George goodnight, lay a lingering melancholy on the viewer, a melancholy that somehow glows.