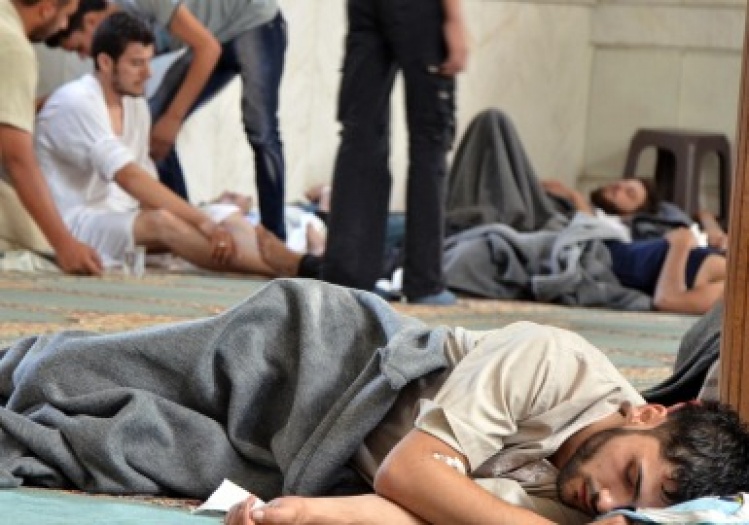 Contrary to the speculation in some quarters, there exists a spectrum of views on political as well as theological questions among Commonweal editors. In writing the magazine’s editorials, we strive for consensus, seeking to practice the habits of moral deliberation we urge on others. As the magazine’s very name connotes, one of our principal goals is to help forge a greater sense of the common good, both within the church and the larger culture. In presenting a variety of opinions on the pressing issues of the day in each issue, we hope to show that as Catholics and as Americans we can reason through our differences in order to act in concert.

On rare occasions the editors fail to reach consensus, and that is the case on the question of whether Congress should pass a resolution endorsing President Barack Obama’s call to strike military targets in Syria. Obama has shown great restraint when it comes to involving the United States in Syria’s brutal civil war. He has been right to do so. As the invasion of Iraq and the war in Afghanistan have shown, there are serious limits to what the United States can accomplish by inserting itself into the internal conflicts of other countries. But that doesn’t mean the United States or the world community can stand by and watch great crimes being committed. Where the United States has the ability to stop or deter such crimes, it should—provided military action is proportionate and has a reasonable prospect of achieving its stated goals. As the political philosopher Michael Walzer has written, “Active opposition to massacre and massive deportation is morally necessary; its risks must be accepted.”

As Obama stated in his address to the nation on September 10, his objective is to conduct a limited and carefully targeted attack to punish Bashar al-Assad and to degrade his military capabilities, especially his ability to use poison gas. The president argues that such an attack is morally necessary to uphold the international norm against the use of such weapons. If there are no consequences for his actions, Assad will be emboldened to use chemical weapons yet again and other rogue regimes will follow suit, eventually threatening basic U.S. security interests. It is hard to see how the UN’s inability to enforce one of the few restraints on war-making that has been observed more in fact than in the breach will strengthen international law or global stability. UN dysfunction cannot be an excuse for inaction.

My editorial colleagues and I agree that the Assad regime has almost certainly used chemical weapons, that military action would be justified if it were likely to be effective, and that Obama is right to seek congressional approval for such strikes. We especially welcome the president’s willingness to place this decision before Congress, thus restoring a crucial aspect of the Constitution’s balance of powers regarding the use of military force. We all furthermore urge the president to abide by Congress’s decision. Where we disagree is in how to measure the risks and benefits of military action.

The risks my colleagues have outlined are real; they certainly give me the greatest apprehension. Yet I do not believe those risks outweigh the need to enforce what has been the remarkably successful international prohibition on the use of weapons of mass destruction. Will more Syrians be saved than killed as a result of an attack? If the strikes diminish Assad’s war-making capability, the likely answer is yes. Will there be unintended casualties? Unavoidably, just as there were in Bosnia and Kosovo. Those limited attacks, however, did bring an end to the larger slaughter, saving tens of thousands of lives. Will Assad use chemical weapons again even if attacked? He well might. On the other hand, if past behavior is any guide, he will certainly use them again if no action is taken against him. Why don’t we stop Assad’s use of conventional weapons to kill indiscriminately? Because there is simply not the political will to intervene in Syria on a large scale. More important, neither is there a plausible military solution to the current conflict. That does not mean, however, that failing to stop one kind of mass killing obliges us to turn away from every mass killing. Assad obviously thinks chemical weapons give him a tactical advantage. If at all possible, he should be deprived of that advantage.

As Obama noted in his September 10 speech, there is now a proposal from Russia for dismantling and transferring Syria’s chemical weapons to the control of the international community. Assad’s principal allies may now think he has badly miscalculated the world’s tolerance for crimes against humanity. If the Russian initiative bears fruit, there will be little doubt that the threat of U.S. military action moved all parties toward a recalibration of what is in their best interests. If the Russian initiative fails, Congress will again be asked to endorse a limited U.S. strike. It should do so. Despite the paranoia on both the left and the right, this president has shown no inclination to prolong or widen America’s wars. That record should count for more than it seems to among Democrats and Republicans alike. Congress must recognize that diplomacy is a mere charade unless international norms can be enforced.