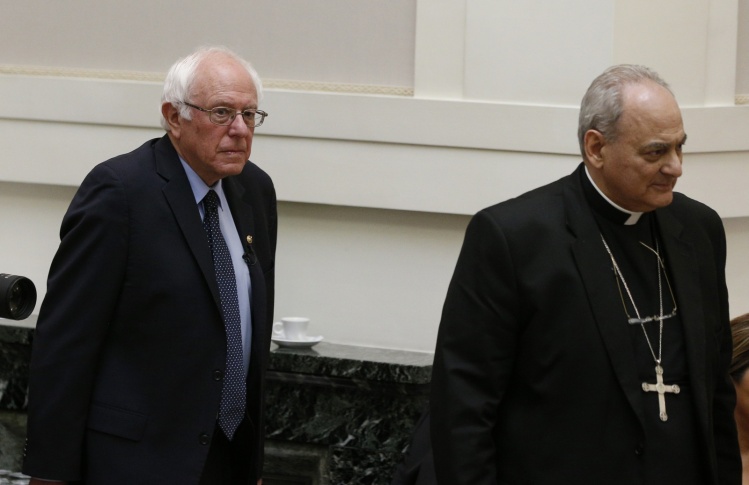 Sen. Bernie Sanders arrives to speak at a conference on Catholic social teaching at the Vatican (CNS photo/Paul Haring)

This essay is the last in a series of three responses to the book Why Liberalism Failed by Patrick J. Deneen.

Both Samuel Moyn and Bryan Garsten turn Tocqueville, an abiding presence in Patrick Deneen’s Why Liberalism Failed, against Deneen’s own conclusions. Both are generally more sympathetic to liberalism than Deneen, and believe that, as Moyn puts it, “remedies are possible within modern liberalism to bring out its virtues and contain its vices.” Finally, both Moyn and Garsten pick up on the book’s curious ambiguities. Moyn insists that Deneen doesn’t seem to actually believe his more extravagantly pessimistic claims. After all, at the end of his more or less unrelenting polemic, Deneen admits that whatever replaces liberalism will have to acknowledge its achievements, though he is rather vague about how one might separate these from liberalism’s vices. Garsten expresses pointed concerns about the favor shown to “relatively closed communities of meaning”; and while Deneen admits we can’t go back to the Middle Ages, it’s also true that his chief criticism of liberalism is that it undoes traditional habits and ways of life and the virtues that supposedly support them. He also occasionally concedes that liberalism is a richer tradition than his rhetoric sometimes suggests—that it is the inheritor of ideals from both the classical and Christian traditions, and that its aspirations have often been quite noble. By the end of Why Liberalism Failed, I confess that I was frustrated that these nuances were mostly tacked on to the beginning and end of the book—why not actually have them inform the main argument?

It’s important to realize, however, that this is typical of anti-liberal polemics from the traditionalist right. It’s easy to rail against an amorphous thing called “liberalism,” to which you attribute much of what’s wrong with the world; it’s significantly harder to specify which features of liberalism we should reject and to grapple with the consequences of doing so. Which rights and freedoms associated with liberalism—or more precisely, whose rights and freedoms—should be curtailed? What sacrifices will have to be made, and by whom? Far safer to leave it all rather vague, expressing dismay about “the sexual revolution” or “multiculturalism” and “diversity,” than to specify just who would bear the costs of finally putting liberalism behind us. We know who suffered in traditional communities, and the inequities and prejudices that the past can hand down to us. We should not forget the injustices that have been all too traditional. I wish more anti-liberals would think harder about what defending “tradition” against the claims of equality meant even just a few decades ago.

Why Liberalism Failed is also a surprisingly abstract book. It portrays a world in which almost no one makes actual political decisions; liberalism just inexorably works itself out, a magical, corrupting essence. In its very first pages, Deneen invokes “a political philosophy conceived some 500 years ago,” before noting that “some 70 percent of Americans believe that their country is moving in the wrong direction”—thus drawing a straight line from Hobbes and Locke to our present discontent. In one of the book’s most telling features, liberalism is consistently assigned a peculiar agency: liberalism does this or that, demands this or that, and so on. As someone who writes about ideas, I admit it’s easy to slip into that kind of shorthand. But in this case it’s not just shorthand: the device is actually essential for the book’s conception and execution.

If Deneen were to attribute agency to real people who make decisions about how to live together, rather than making them the mere plaything of ideas, then he would need to be more specific about where we went wrong. Instead of (not unreasonably) lamenting the role of “technology” in our lives, he might have to decide whether we should blame liberalism for antibiotics as well as for the smartphones to which we’re all so addicted. Is the former part of the sinister, Promethean desire to seek “mastery” over nature that sprang from the mind of Francis Bacon? If not, why? Instead of conflating liberalism and unbridled capitalism, Deneen would need to tease out their complicated relationship in history—and decide whether or not the recent “populist” revolts were fated centuries ago (from Locke to “Lock Her Up,” one might say) or have more recent causes, such as four decades of neoliberal economics. In short, Deneen would have to grapple with specific choices in the history of recent politics—choices that were never inevitable—instead of making sweeping claims about the unavoidable consequences of “liberalism.” Of course, it might turn out that all these slopes really are quite slippery; maybe we can’t have antibiotics without also expecting smartphones, or maybe once we move beyond a world of yeoman farmers we are destined for the most rapacious forms of global capitalism. But rather than proving that liberalism has a destiny—that it always will grow more destructive over time—Deneen simply assumes it.

It’s not surprising, then, that he doesn’t have much to say about what might come after liberalism. How could he? It would require a totally different style of analysis. He does endorse Rod Dreher’s “Benedict Option,” and recommends more robust “home economies.” But if liberalism is as pervasive and destructive as Deneen says it is, I doubt such experiments in localism will be an effective response. Won’t the supposedly jealous god of liberalism cut them down before they can gain a real foothold? I understand the impulse to avoid constructing just one more “ideology,” but surely setting forth political principles and suggesting what institutional arrangements might sustain them is not too much to ask. I want anti-liberals to describe what the world they want to live in would actually look like.

I still want liberalism’s best ideals to be realized, and think they can be. I want to extend its promises to those it has not yet reached.
sharetweet

I don’t want to be unfairly critical of Deneen, who is a beloved former teacher (without a doubt the most generous and engaged professor I had in graduate school). Why Liberalism Failed is a bracing read; it pushes us to ask first-order questions about the foundations of liberalism, about the assumptions that might lurk behind contemporary debates. But liberalism is not all, or only, Bacon, Hobbes, and Locke; it is not just progressives who assume they are on the “right side of history”; it is not all technology run amok. It’s also the belief, to cite Thomas Jefferson (perhaps dubiously), “that the mass of mankind has not been born with saddles on their backs, nor a favored few booted and spurred, ready to ride them legitimately, by the grace of god”; it’s also Franklin Roosevelt and the New Deal, Isaiah Berlin’s pluralism, and Judith Shklar’s demand that we avoid cruelty. And given the rising tide of anti-liberal politics all around us, it is important to write about these matters with nuance and precision.

I make these claims from the Catholic left and as an editor at a Catholic magazine that has long struggled to hold the Catholic faith and liberal democracy in creative tension. So I share at least some of Deneen’s criticisms of liberalism, especially liberalism at its most individualistic and most subservient to propertied interests and existing structures of power. I, too, am wary of “libertarian” iterations of liberalism, and I’ve argued, in agreement with Deneen, that liberal politics can easily become too technocratic, too prone to an illusory “neutrality,” too ignorant of the way its health can depend on moral resources outside of itself. Only, I don’t believe any of this means that liberalism is simply a poison tree. Liberalism is a rich and varied tradition, not reducible to “possessive individualism.” For these reasons, I’m not willing to declare that liberalism has “failed.” I still want its best ideals to be realized, and think they can be. I want to extend liberalism’s promises to those it has not yet reached.

Deneen, for example, laments the inequality that ravages our society, as do I. But I don’t know how appeals to traditional communities and the disciplines they impose will fix that. Instead, I look to the burgeoning set of arguments on the left about, say, Medicare for All, the necessity of robust unions, better and more democratic corporate governance, a universal basic income, and investment in infrastructure. I mostly agree with Daniel Bell that one can be liberal in politics and socialist in economics. What liberalism proposes formally—equality—I want to make a substantive reality. That often entails going beyond liberalism’s own modest requirements. Such proposals, though, constitute a different stance toward liberalism than Deneen’s, one that is both more dialectical and also less fearful of “the state,” viewing it not as an agent of individualism but as the vehicle to achieve a more decent and just society. We have to confront capitalism, not hide from it. Something like democratic socialism is in this sense not the negation of liberalism, but its fulfillment.

Critics of liberalism, whether those like Deneen who have a fondness for the Benedict Option or those Catholics now agitating for “integralism,” tend to imagine communities in which all social problems are settled ahead of time. Maybe by defending liberalism, whatever my criticisms of it, I’m defending politics as an ongoing, open-ended endeavor rather than a menu of self-sufficient theories that wish away our most pressing dilemmas and challenges.

Schism Predictions, with Something to Offend Everyone 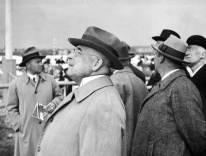