After the Bombings
By Maurice Timothy Reidy
Foreign Affairs

I watched the television coverage of the terrorist bombings in Madrid from a hotel room in Gibraltar. My wife and I were vacationing in Spain, and Gibraltar was the second stop on our itinerary. It was the only time during our trip that we were able to watch the news in English. But the language didn’t matter. The pictures were enough.

The next day we were in Seville, one of many cities scheduled to hold rallies against terrorism. We decided to go. A man in a bar across the street from our apartment told us the rally was near the train station. So we boarded a bus at Plaza Nueva, not far from Seville’s cathedral, hoping it would take us there. It was raining, and most businesses had closed early to allow people to attend the rally. The bus was jammed. A young mother stood next to us, her two children writing their names on the fogged-up windows. A few minutes later, when the woman and her children were preparing to exit, we asked her if this was the right stop. She shrugged her shoulders. Like us, she was just following the crowd.

Getting off the bus, we followed the sea of umbrellas, which eventually brought us to a street flooded with people, slowly moving forward. Could this be it? There were no speakers and only a few banners. A woman wore a button that said “Todos contra la violencia,” but other than that, signs were sparse. TV cameras scanned the crowd from windows above us. It was a diverse group, from the little boy in the blue raincoat to the grey-haired women in headscarves watching it all from under the eave of a house.

A lot has been written about Spain since the bombings and the subsequent victory of the Socialist Party in the national elections. First there were words of support. Then, after the Socialist victory and the new president’s pledge to withdraw troops from Iraq, accusations of appeasement. I found it hard to determine what the Spanish were reacting to, or against, on Election Day. What I did notice was how quickly they were expected to come to terms with their grief. Within days of the bombing, Spanish talk shows were full of survivors of what they were calling the Madrid Massacre. I don’t speak Spanish, but I didn’t need to in order to understand what was going on. The rituals of talk shows are universal.

We were in Seville on the day of the election. I watched the returns that night, though it wasn’t until a few days later, when I found an English-language paper, that I realized the ramifications of the Socialist victory. By that time we were in Madrid and so much had happened, the bombings seemed long since past. Still, there were reminders. Near the Plaza del Sol, we came upon a shrine to the victims, a line of candles stretching an entire block. People walked slowly by, reading the notes left by family members.

Ironically, it was in Seville that I got the best sense of what had happened in Madrid. On the night of the rally, we walked with the crowd for nearly an hour, bobbing and weaving to avoid the umbrellas. It eventually became apparent that we were part of a procession around the city. It reminded me of the night of September 11, when I attended a candlelight ceremony in New Haven, Connecticut. I can’t remember what was said, but I do remember how important it was to be in the presence of other people. It didn’t matter that we were seventy-five miles from New York. I suppose it was the same for the people in Seville and Valencia and Cadiz and all the other cities that held rallies that night.

We spent most of our time in Spain in cathedrals and museums, lingering in cafés and parks. At night, we watched Spanish TV and read about the Spanish Civil War and Philip II. We rushed from city to city, trying to see as much as we could. Why? Part of it, of course, was plain curiosity. But most of it, I think, was born of a belief that if I visited enough places and read enough books I would, every so often, feel less like the outsider I so obviously was. That rarely happened during our trip-though it did that night in Seville.

Maurice Timothy Reidy is a former associate editor of Commonweal. 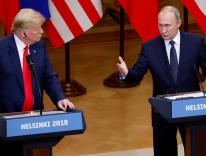