A Slain Priest, a Martyr, a Saint?
By Robert Mickens
Letter from Rome 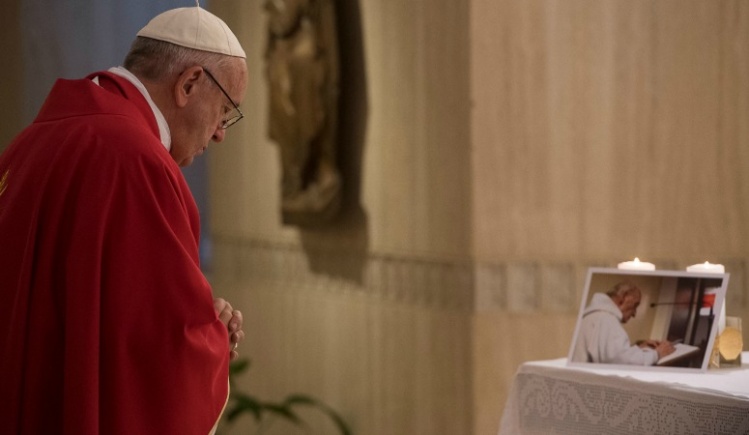 “Killing in the name of God is satanic!”

So said Pope Francis on Wednesday morning at a Mass during which he pretty much de facto beatified Fr. Jacques Hamel, the French priest killed by two radicalized Muslim youths last July while celebrating the Eucharist.

“From heaven,” Francis added, “may he grant us meekness, fraternity, peace and also courage to say the truth—to kill in the name of God is satanic!”

Archbishop Dominique Lebrun of Rouen, the diocese in which the late priest ministered, said the pope signed a photo of Fr. Hamel after the Mass and left little doubt that the slain priest could now be honored as someone who has already been beatified.

“You can put this photo in the church because he is now blessed; and if anyone says he have no right to do so, tell them the pope gave you permission,” recounted the archbishop, adding that the archdiocese planned to formally open Fr. Hamel’s cause for canonization.

But will that be necessary?

Pope Francis’s words could not be clearer. He said Fr. Hamel was a martyr. And in the Vatican’s norms for saint-making that means one is already eligible to be formally declared “blessed”; that is, to be officially beatified.

No miracles are needed for this penultimate step to sainthood if one is recognized as having suffered martyrdom.

Now we must wait to see if Francis takes the further step of instructing the Congregation for Saints to proceed with a decree to juridically recognize Fr. Hamel as a martyr. Then the pope or a delegate (such as the prefect of the Congregation for Saints) would likely preside at a Mass to publicly celebrate and declare the Church’s recognition that this elderly priest died a martyr and is now in heaven.

That’s a move neither of his two most recent predecessors would take regarding another priest who was murdered while celebrating Mass.

Archbishop Oscar Romero of El Salvador was gunned down in 1980, but it took Francis to finally cut through the polemics and (just last year) declare the obvious: Romero was a martyr.

After the pope’s remarks on Wednesday it is unlikely that devotees of Jacques Hamel will be forced to wait thirty-five years until the late French priest is also officially called “blessed”.

Archbishop Lebrun was in Rome with a group of French pilgrims from Fr. Hamel’s parish, as well as with survivors of a terrorist attack that occurred in the coastal city of Nice several days before the priest’s murder.

The prelate will also join some five hundred other religious leaders, representatives of at least nine different faiths, who will be in Assisi next week to participate at a three-day interreligious peace conference.

Pope Francis will join the gathering on Tuesday, the event’s final day. And he will lead the concluding ceremony—the signing of a message and an appeal for peace around the world.

It’s very likely that the bold and thundering words he used at Fr. Hamel’s memorial Mass in Rome will find their way into that final document.

“How I wish that all religious confessions would say that killing in the name of God is satanic,” Francis said at the liturgy.

You can bet that he and his Vatican aides will be pushing for this denunciation to be in the final message.

The event is called, “Assisi 30 (1986-2016): Thirst for Peace – Religion and Cultures in Dialogue.” More than twelve thousand people are expected to come pray and support the participants on the small hilltop town in Umbria that was home to the beloved St. Francis.

Among the headliners are the Ecumenical Patriarch of Constantinople, Bartholomew I, and the Archbishop of Canterbury, Dr. Justin Welby, who will be representing two of the several Christian denominations. Some twenty-six Muslim delegations will also take part in the dialogue sessions. And it is hoped that Ahmad al-Tayyeb, leading Muslim cleric of the Al-Azher University and one of the most authoritative spokesmen for Islam, will also be on hand.

Conspicuous by his absence, however, will be the 1989 Nobel Peace Laureate, the Dalai Lama. The guru of Tibetan Buddhism was present at the first interreligious prayer for peace gathering in Assisi that John Paul II called in 1986. He met the late Polish pope on at least two other occasions, as well. And he had a brief, unpublicized meeting with Benedict XVI in 2006. But so far Francis has declined such a meeting.

The reason is obvious: the Chinese get angry when leaders pay any special honor to a man they consider an enemy of their national sovereignty and unity.

And the Holy See doesn’t want to do anything that will jeopardize its newly intensified efforts to normalize diplomatic relations with China’s Communist Government.

This has earned Pope Francis opprobrium from some Chinese Catholic hardliners (and others) who believe he’s showing weakness by not standing up to the Communists. But the pope, who will be 80 in December, has not been afraid to be seen as weak before those who traditionally have been at loggerheads with the Roman Church (including the Russian Orthodox Church, secularists, anti-Christian individuals and organizations). It is part of a strategy one might say is radically rooted in the Gospel and behavior of Jesus Christ who did not raise a hand to defend himself and rebuked those who tried to defend him.

In any case, one cannot blame Francis or the Vatican for not inviting the Dalai Lama or anyone else—at least not technically.

The Vatican is not organizing the Assisi 30 gathering. That’s the work of the Sant’Egidio Community, the Franciscan Friars of Assisi and the local diocese.

Pope Francis and his group of nine cardinal-advisors, the C9, have concluded their latest round of meetings on reforming the Roman Curia and attending to other business concerning the Universal Church.

A Vatican communiqué said one of the items on the agenda was the selection of bishops, including the role the apostolic nuncio (Vatican ambassador to a country) currently plays in the process.

No details were provided concerning that conversation, but certainly the pope would like to find a method to ensure the selection of a better sort of bishop than we find in some places.

Again, the model seems to be a radically modeling of Christ and his earthly ministry.

“He made himself all things to all people, close to all, to the poorest,” Francis said at his Wednesday general audience in St. Peter’s Square.

“He was a pastor among the people, among the poor: he worked all day with them,” the pope said.

Then he issued another one of his zingers, which makes some bishops and wanna-be-bishops still cringe.

There are signs, at least in some places around the world, that Francis has begun to find candidates for the episcopate who conform more to the spirit of Jesus, as he reads it.

He and his aides are going to have to accelerate and perfect that search if they want his vision for the church to fully take root in dioceses around the world.