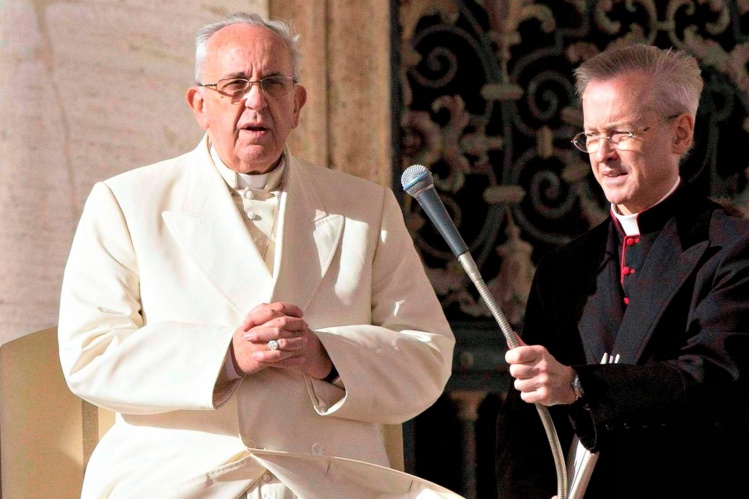 The Church of Rome on Tuesday marked the feast of Santa Bibiana, a supposed 4th century virgin and martyr known in English as Saint Vivian. There’s an old proverb in the Eternal City that says, “Se piove il giorno di santa Bibiana piove 40 giorni e una settimana.” The authors of Liturgiam Authenticam might forgive me for loosely translating that as, “If on St. Vivian’s day the rain comes down from heaven, it will continue to fall for another forty days and seven.” Well, it rained all right! And if local forecasters are correct, it is going to continue to do so, off and on, for at least the next couple of weeks. Several thousand people had to take shelter under umbrellas on Wednesday at Pope Francis’s general audience, as wind and rain made a mess of St. Peter’s Square. “A brutta giornata, buona faccia!” the pope said to the crowd’s delight. Evidently, that means, “Put a good face on an ugly day.” The saying is far more significant than just a motto for coping with inclement weather. No doubt, Papa Francesco has also drawn encouragement from these words over the past several months, faced with those in the Roman Curia and some chanceries around the world that are less than enthusiastic about his efforts to reform and renew the church. “Opposition” to the Jesuit Pope began to coalesce after exactly one year ago last week. That’s when he published his apostolic exhortation, Evangelii Gaudium, the “programmatic” document for his pontificate. It is striking how many priests and bishops, at least those famous for quoting papal documents ad nauseam, seem unable to even pronounce the name of Francis’s challenging text. And opposition is bound to intensify in the Vatican. Cardinal Óscar Rodríguez Maradiaga, SDB, coordinator of the Council of Cardinals (C-9), said this week the pope wants fewer cardinals working in a reformed Roman Curia.

Speaking of men in red hats, the number of those under the age of eighty and eligible to vote in a conclave dipped to one hundred and twelve on Tuesday, when Cardinal Tarcisio Bertone, SDB, celebrated his eightieth birthday. The Northern Italian Salesian, of course, was Benedict XVI’s right-hand-man (or, as he once boasted, his “yes-man”) for many years. Their friendship also dates back many years, but it began to intensify in the summer of 1995 when Bertone began his first of more than seven years as archbishop-secretary at the Congregation for the Doctrine of the Faith (CDF), where Joseph Ratzinger was the cardinal-prefect. In the second year of his pontificate in 2006, Benedict named Bertone his secretary of state. The former pope brought the cardinal back here from Genoa where he had been archbishop for just three-and-a-half years. Within months Benedict also named him camerlengo, or chamberlain of the Holy Roman Church, the official that “runs” the church and the Vatican during the sede vacante or interregnum when there is no pope. It would seem that Cardinal Bertone has lost this post, too, after turning eighty, the age when cardinals generally lose their membership in the major Vatican offices. But there’s been no announcement so far. In a new rescript last month, Pope Francis reminded cardinals appointed to posts in the Roman Curia that, actually, they are obliged (sono tenuti) to hand in their resignations at age seventy-five, subject to the pope’s further decision. Of course, the camerlengo is now well past that age. And so is the soon-to-be seventy-eight-year-old vice camerlengo, Archbishop Pier Luigi Celata. In any case, the number of cardinal-electors will further fall to one hundred and ten a month from now after two more cardinals – Julius Darmaatmadja, SJ, of Indonesia and Giovanni Lajolo of Italy – also age out. Speculation is rife that Pope Francis will hold his second consistory in February to bring their number to one hundred and twenty, the ceiling Paul VI set for conclave participants (more on that next week).

If you are looking for a nice Christmas gift this year you might want to consider a new book called A Pope Francis Guide to God’s Time. It’s a one hundred and twenty-page tour through the liturgical year based, largely, on the daily reflections the pope offers at Mass each morning at the Casa Santa Marta with fellow his residents and visitors. Cindy Wooden, longtime Vatican news and affairs writer at the Rome bureau of Catholic News Service (CNS), is the author of this handsome volume, which is beautifully illustrated by the work of CNS photographer Paul Haring. The book is available in English, Spanish, and Italian. It’s published by CNS/U.S. Conference of Catholic Bishops and the Libreria Editrice Vaticana (the Vatican publishing house). You can order it directly from the bishops’ publishing office or on Amazon. And this is how it came to be: “Last spring I went back over the homilies Pope Francis delivered in the first fourteen months of his pontificate,” said Ms. Wooden, a veteran of twenty-five years of Vatican reporting. “This time I was not looking for news, but for his explanations of how the Catholic Church divides up its calendar into seasons, special times of preparation and special times of celebration: the liturgical year.” The CNS senior correspondent added: “The result is this book, which is illustrated with ninety-one beautiful photographs.” Her favorite is one of the pope in Jordan last spring. It captures the wind blowing off his zucchetto (white skull cap), giving the effect of it hovering above his head. It was this photo that Ms. Wooden pointed out to Papa Francesco a couple of weeks ago when she presented her book to him during his flight to Strasbourg, France. Francis burst out laughing when she told him how impressed she was that he could “levitate” his zucchetto.