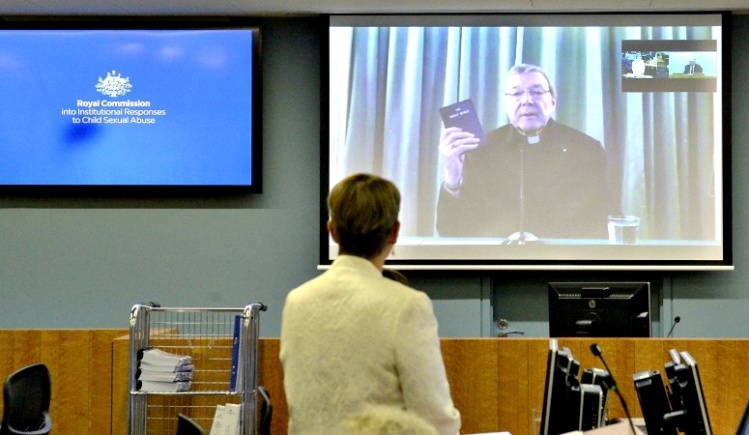 In the dead of the night.

That one, eerie line has been included in most news accounts of Cardinal George Pell’s appearance this week before the Australian Royal Commission’s inquiry into institutional responses to sex abuse of minors.

And, indeed, there was a surreal aspect to the way the seventy-four year old churchman sat before a TV screen in a ball room of a posh hotel in central Rome as the commission grilled him via an Internet connection from Sydney.

But Big George was not alone during the 10 p.m. to 2 a.m. questioning.

Over a dozen survivors of abuse by priests came from Australia to be a reminding presence to the sullen-looking cardinal as he spoke about what he knew some thirty years ago and when he actually knew it.

“At this stage, our information is that there will be at least fifteen victims and advocates arriving from Australia. Perhaps others will also be arriving from there and other places around Europe,” said the cardinal’s personal secretary, Fr. Mark Withoos, in an email sent to undisclosed recipients a few days before the proceedings got underway.

“There will be, naturally, a large media cohort also,” the priest said in the message, which urged Cardinal Pell loyalists to come to the hearings.

“At this stage the Cardinal has only five or so close collaborators definitely coming although we are seeking interested parties in various quarters,” he wrote.

When the hearings opened on Sunday night the cardinal did not attract enough supporters to field an Aussie rules football team.

There were a handful of Australian priests and seminarians currently studying in Rome, as well as two well known American personalities connected to conservative church institutions in the Eternal City.

One was Fr. John Wauk, an Opus Dei priest who works at the personal prelature’s Santa Croce University in town and is often a commentator on U.S. television. The other was Kishore Jayabalan, director of the Rome branch of the Acton Institute, a think-tank promoting unbridled, free-market capitalism based on Christian principles.

There was certainly a “large media cohort,” to again quote Fr. Withoos. But the priest failed to mention that Cardinal Pell would also have a cohort—made up of Withoos, Danny Casey (long the cardinal’s right-hand-man on finances), and a few Vatican bodyguards dressed in smart dark suits.

A number of Cardinal Pell’s critics (and there are many) have refused to believe that ill health was the real reason that kept His Eminence from returning to Australia and appearing in person before the Royal Commission.

Some of them surmise it was, instead, a deliberate attempt to make things more complicated for the commission and “poke a finger in its eye.” If so, it backfired spectacularly.

By his insistence on remaining in Rome the cardinal has brought the trial-like atmosphere into the pope’s backyard and commanded a huge media interest—particularly among Italian journalists—that would never have been generated had he gone back home.

Most of the Italians who cover the Vatican have done very little by way of reporting on sexual abuse among the clergy or other scandals. For example, none of the big names among the local Vaticanisti were connected to breaking or significantly investigating the so-called VatiLeaks saga that plunged the last months of Benedict XVI’s benign reign into dysfunction and chaos.

Gianluigi Nuzzi and Emiliano Fittipaldi, the two journalists the Vatican has put on trial for publishing confidential material in VatiLeaks II, probably don’t even own an Annuario Pontificio—the all-essential directory of the Vatican and the worldwide Catholic Church. The pope and church are not their normal beat.

The same with sexual abuse by Catholic priests and the cover-ups by bishops. The Italian writers who specialize in Vatican and church matters have done virtually nothing to advance reporting on this issue. But they are all writing about Cardinal Pell’s testimony this week at the Hotel Quirinale.

And because they are, it will be impossible for Pope Francis and other powerful men in the Vatican to remain ignorant of what is going on. If you want to get the attention of people in this clerical theme park on the Tiber, you had better put it in Italian.

And that is exactly what is happening now.

Whether it will make a significant difference is another matter. The Argentine pope—like so many Latin American prelates and still too many officials in the Vatican—has been disappointingly slow to take significant action against bishops who were negligent in their moral responsibility to stop abusive priests and protect vulnerable youngsters.

Will Francis believe that just about everyone in Australia—bishops, priests, lay people and even the police—duped George Pell from the day of his ordination in 1966 and kept him in the dark about abusive priests right up to the day he was named Archbishop of Melbourne some thirty years later?

That is what the cardinal, who now has been the Vatican’s finance minister the past two years, has been telling the Royal Commission. And thanks to the unusual venue, everyone in Italy—and the Roman Curia—has been given a front row seat to his testimony.

Whether they will believe Cardinal Pell’s account is a tricky bet. But it’s a gamble the cardinal could have more easily avoided had he only returned to Sydney for the hearings.

Pope Francis will preside at a Lenten penance service this Friday in St. Peter’s Basilica before heading to the hills outside of Rome two days later for a weeklong retreat.

The pope and top officials in the Roman Curia will again be holding their annual Lenten spiritual exercises in the town of Ariccia at a retreat house operated by priests of the Society of Saint Paul (Paolini).

That means he will not be in Rome next Tuesday for International Women’s Day and will again miss the opportunity to take part in the third annual “Voices of Faith” gathering at the Vatican.

The event, according to its website, “provides a place in the heart of the Vatican for women to share their stories of strengthening the church’s mission through their leadership.”

Strangely, Pope Francis has never explicitly acknowledged “Voices of Faith,” even though it has taken place only several hundred feet from where he lives. Yet, he continues to offer encouraging words to women in general.

“A world where women are marginalized is a sterile world, because women don’t just bear life but transmit to us the ability to see otherwise, they see things differently,” he said last year on the occasion of the March 8 women’s day.

“They transmit to us the ability to understand the world with different eyes, to understand things with hearts that are more creative, more patient, more tender,” he said.

There is no evidence that the pope has actually backed up those encouraging words with good example. Women are still excessively marginalized inside the Vatican. And if he believes women’s hearts are “more creative, more patient, more tender,” then why doesn’t he give them the chance to share their unique understanding and different vision of the world in a truly significant way?

For example, why did he not ask a woman—instead of a priest—to preach his spiritual exercises? There is nothing in church law that prohibits this. Many priests today even have women spiritual directors.

And even in liturgical settings bishops can give authority to the lay faithful—including women—to preach, given certain conditions.

Fra Enzo Bianchi, founder and prior of the Ecumenical Monastery of Bose in Northern Italy, took that issue up this week in the women’s insert in L’Osservatore Romano.

He stressed that preaching was a charism—that is, a gift from God—that must be recognized, authorized and shared for the good of the entire Christian community.

For example, he noted that the Benedictine Abbess Hildegard of Bingen (1098-1179), whom Benedict XVI declared a doctor of the Church, regularly preached to bishops and even to Pope Eugene III.

Ordination is not a necessary requirement for preaching, as evidenced by St. Hildegard and St. Francis of Assisi (who, according to Fra Enzo, was granted permission to preach even before his alleged ordination to the diaconate). And yet they are not even the most illustrious examples of this.

“Let’s not forget that Jesus preached in the synagogues of Nazareth and other towns without being either an ordained priest or rabbi,” wrote Bianchi.

“He did so by prophetic charism and because he was authorized by the heads of various synagogues,” he added.

Might that Pope Francis, at some point in this Year of Mercy, find a charismatic woman preacher who can offer her creativity, patience and tenderness to him and the papal household.

Now that would be a concrete way to put beautiful words into good practice.