Who Will Lose His Vatican Job Next?
By Robert Mickens
Letter from Rome
Bishops
Web Exclusive 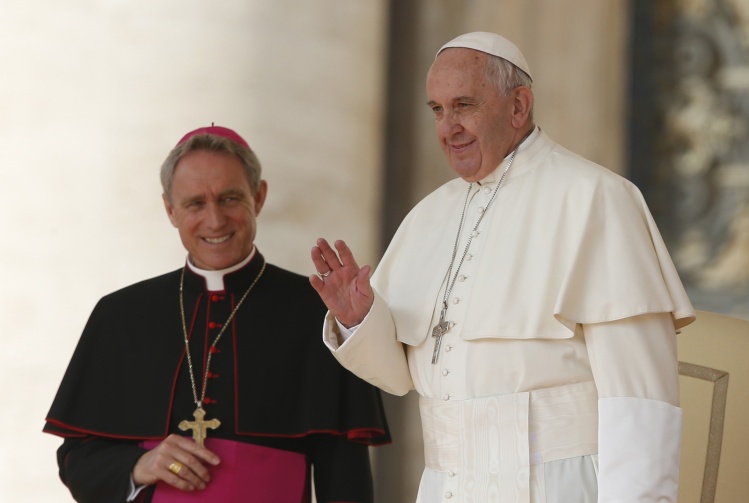 Pope Francis greets the crowd at the beginning of his general audience in St. Peter's Square. At left is Archbishop Georg Ganswein, who will soon complete five years as prefect of the Papal Household. (CNS photo/Paul Haring)

Who’s the next president or prefect of a major Vatican department that Pope Francis will let go?

Many heads could start to roll—that is, if Cardinal Gerhard Müller is right and the pope really has decided to replace Roman Curia chieftains at the completion of their five-year terms.

Francis must have adopted this new policy at the very last minute. Because a mere six days before Müller reached the conclusion of his quinquennium on July 2, Archbishop Jean-Louis Bruguès OP already completed his first five years as Archivist and Librarian of the Holy Roman Church.

Benedict XVI had appointed Bruguès to the prestigious post on June 26, 2012. And by doing so, he all but guaranteed the Dominican would become a cardinal, considering that every one of his librarian predecessors dating back to 1550 eventually got the red hat.

But up to now, Bruguès, who will be seventy-four in November, has been denied entrance into the illustrious College of Cardinals. And yet Pope Francis has allowed him to continue past his initial mandate, in contrast to what happened to Cardinal Müller.

So who’s next in line to lose his Vatican job?

Going by the numbers, it should be Archbishop Georg Gänswein. In just five months from now–on December 7, to be precise–the soon-to-be sixty-one-year-old private secretary and housemate of the retired Benedict XVI will complete five years as prefect of the Papal Household.

And unless Francis makes an exception to the new policy he allegedly told Müller, Gänswein should be replaced on that date.

But there are many other department heads that should also be moved out. And almost all of them are Benedict XVI appointees. In fact, the former pope named fifteen of the men who currently sit atop the thirty-one most important Vatican offices that are normally led by a cardinal or bishop. John Paul II appointed a sixteenth in 1998: Bishop Marcelo Sanchez Sorondo, chancellor of two pontifical academies dealing with science and the social sciences.

All of these prelates, with the exception of Archbishop Gänswein, are into a second, third or—as in Sanchez’s case—fourth five-year term. Meanwhile, the men who head the remaining fifteen departments were appointed by Pope Francis and are still in their initial quinquennium.

And, so, after more than four years in office the Jesuit pope is still trying to work with (or around) a Roman Curia where holdovers from the previous pontificates slightly outnumber the office chiefs he’s appointed. And not all of them are exactly enthusiastic supporters of the vision and reforms that he is trying to bring to the Vatican bureaucracy and, more importantly, the global Church.

In theory and in practice, Francis could replace any of these men from the old guard at any time. Many think he should have done so already.

Francis could replace any of these men from the old guard at any time. Many think he should have done so already.
sharetweet

But the pope has been very patient and even merciful towards these people by keeping them on. As noted before, bishop-ordinaries are vicars of Christ in their respective dioceses and can legitimately hold certain views at variance with the Bishop of Rome. But not those who are in the pope’s curia. They work for him and should be his most visible supporters.

Cardinal Müller and some of his supporters believe Francis’s alleged new policy to enforce strict term limits for the heads of Vatican offices is a sign of heavy-handedness and vindictiveness. But, actually, the truth is that the reformer-pope has run out of patience with the obstructionists and now wants to move more decisively in replacing them with people who are much more eager to promote his agenda.

After all, the clock is ticking.

In the case of Cardinal George Pell, the Australian police did the pope a favor when they demanded that the prefect of the Secretariat for the Economy return to Melbourne to face “multiple charges in respect of historic sexual abuse.”

Francis chose Pell to reform the Vatican’s financial operations at the suggestion of powerful cardinals and bishops, most who are nervous about (if not hostile to) the direction in which the pope is reorienting the Church. His choice of Pell was a goodwill gesture towards those quietly in opposition to certain key aspects of his pontificate and an effort to allow them a share in some sectors of ecclesial governance.

But they have shown themselves to be far less magnanimous than Francis by calling into question some of the pope’s actions and even criticizing him—both directly and indirectly.

To be fair, not all of Papa Ratzinger’s appointees who still head curia offices are rowing against Papa Bergoglio. But, ironically, the holdovers that have been most supportive are likely to be among the first to be replaced. They will simply age out.

The first will likely be Cardinal Francesco Coccopalmerio who is well into his eleventh year as president of the Pontifical Council for Legislative Texts. If not before, this key canon lawyer ally to Francis will certainly be replaced by March when he turns eighty.

And then there is Cardinal Angelo Amato SDB, who is in his tenth year as prefect of the Congregation for the Causes of Saints. A key aide to Cardinal Ratzinger years ago at the CDF, he has worked quite cooperatively with current pope. But he will be eighty next June and will have to step down by then.

Then there are other cases, such as those set to mark the completion of two five-year terms.

For example, Cardinal Jean-Louis Tauran, who is a strong supporter of Pope Francis, completes his second quinquennium as president of the Pontifical Council for Interreligious Dialogue this coming September. Considered the leading Vatican diplomat of this generation, the affable Frenchman suffers from Parkinson’s and scoliosis. Will the pope replace him this fall or wait until next April when the cardinal turns seventy-five? Either way, Tauran’s tenure appears to be coming to an end.

Cardinal Gianfranco Ravasi this September is also marking two five-year terms in his post as president of the Pontifical Council for Culture. The word is that he will be replaced in October when he reaches the canonical retirement of seventy-five.

Another office head to conclude two terms is Archbishop Piero Marini. He’ll finish his tenth year as president of the Pontifical Committee for International Eucharistic Congresses on October 1. Three months later he'll turn seventy-six. It’s not a major office, but does he stay or does he go? The pope could let Marini go and replace him with a cardinal who is too young to retire, but too disruptive to be posted anywhere else.

One of the key curial aids that Francis inherited from his predecessor is Cardinal João Bráz de Aviz, who has been prefect of the Vatican congregation dealing with religious orders since 2011. It’s doubtful that the pope will replace him.

But what about someone like Cardinal Marc Ouellet? The French-Canadian Sulpician recently began his eighth year as head of the Congregation for Bishops. It is a badly kept secret that he and Francis have had starkly contrasting views on the selection of bishops in key dioceses around the world. But Ouellet just turned seventy-three last month, so he’s two years from retirement.

And then there is Cardinal Leonardo Sandri, who is in his eleventh year as prefect of the Congregation for Eastern Churches. The Argentine has never been a close friend of his fellow countryman, the pope. In fact, when Francis was still Archbishop of Buenos Aires, Sandri is said to have worked against him in Rome. Francis has so far kept the cardinal in place and will probably not retire him until November 2018 when Sandri hits seventy-five.

The sixty-seven-year-old Cardinal Kurt Koch (Christian Unity) and soon-to-be sixty-six-year-old Archbishop Rino Fisichella (New Evangelization) both began their jobs in 2010. Unless Francis finds a ceremonial post for the cardinal or another Vatican job for the archbishop, they are likely to remain where they are for now.

The difficulty of replacing curia cardinals who are still several years from turning seventy-five is where to re-assign them. The sixty-nine-year-old Cardinal Müller, for example, reportedly refused to be Grand Master of the Knights of the Holy Sepulchre and has decided to take early retirement, remaining in Rome.

Perhaps Francis will try to park Koch or Ouellet there if he decides it would be more helpful to replace them. Otherwise, there are not many options except early retirement or missionary work.

But if Pope Francis is really serious about enforcing office terms for the heads of Vatican offices—and that is a big “if”—the real test will come in September 2018. That’s when Cardinal Lorenzo Baldisseri will have completed his quinquennium as Secretary General of the Synod of Bishops.

The pope surely would not replace him one month before the Synod’s big assembly on young people, would he? Even if the cardinal will already be seventy-eight years old?

If Francis does not change Baldisseri then, it will undoubtedly provoke a huge backlash from Cardinal Müller and his supporters. And that is a prediction you can count on.