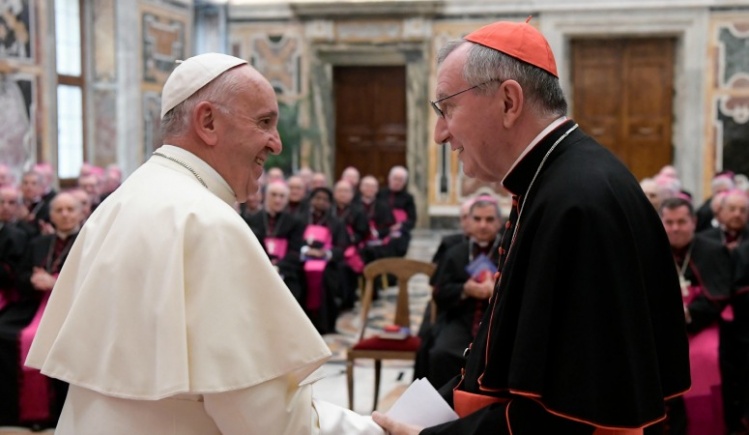 Pope Francis is a man of discernment. And he believes all Christians should be, too.

This is essential to understanding what motivates him and how it affects the decisions he makes.

“This discernment takes time,” he said in the lengthy interview he gave to La Civiltà Cattolica (then reproduced by other Jesuit publications) just months after his election as Bishop of Rome.

“For example, many think that changes and reforms can take place in a short time. I believe that we always need time to lay the foundations for real, effective change. And this is the time of discernment,” the new pope said.

“Discernment is always done in the presence of the Lord, looking at the signs, listening to the things that happen, the feeling of the people, especially the poor,” he continued.

And then he added, “The wisdom of discernment redeems the necessary ambiguity of life and helps us find the most appropriate means, which do not always coincide with what looks great and strong.”

When it comes to discerning the big picture—that is, the road the church is being called to travel at this time in history—Francis has no doubts. He believes it is the path of synodality.

“It is precisely this path of synodality which God expects of the church of the third millennium,” he said in a major address in October 2015.

“A synodal church is a church which listens, which realizes that listening is more than simply hearing. It is a mutual listening in which everyone has something to learn,” he said.

The occasion for that talk was the fiftieth anniversary of Blessed Paul VI’s institution of the Synod of Bishops, which he decreed at the very start of the fourth and final period of the Second Vatican Council (1962-1965).

The commemoration took place while the Synod was actually in session. For the second time in two years Francis had called the bishops together to openly and frankly discuss issues related to marriage, family, and human sexuality.

In his extraordinary address, he told them he was convinced that the Synod of Bishops and synodality at every level needed to be further “enhanced.” The goal is to better develop episcopal collegiality, soundly decentralize governance and connect more effectively with the “base.”

“The Pope is not, by himself, above the church; but within it as one of the baptized, and within the College of Bishops as a Bishop among Bishops, called at the same time—as Successor of Peter—to lead the church of Rome which presides in charity over all the churches,” Francis said.

And he believes his leadership is more genuinely in conformity with the Gospel and the design of authority Jesus granted to the apostles when he exercises leadership with all the bishops.

But will he be able to institutionalize this form of collegial governance through a reform of the Synod of Bishops?

If that is his goal, he has a very long way to go.

The first thing he has to do is wash some people’s mouths out, because right now the language being used by too many church folk belies either extreme carelessness or utter ignorance of the Synod’s true nature.

Paul VI decreed that the Synod of Bishops would be a Rome-based “permanent Council of bishops for the universal church.”

“The Synod of Bishops is directly and immediately subject to the authority of the Roman Pontiff, whose responsibility is… to call the Synod into session… in General Session, in Extraordinary Session, and in Special Session,” the papal documents says.

Thus, the Synod—like a country’s parliament—is a permanent institution. It always exists, whether or not it is in session.

It is just as incorrect to say the pope has called a synod for 2018 as it would be to say that the U.S. president has called a senate for next month. The only difference is that—at least up to now—parliaments and congresses are more permanently in session than the Synod of Bishops.

It is not a good sign when even the Synod’s secretary general constantly refers to “last year’s synod” or “the two synods on the family,” as Cardinal Lorenzo Baldisseri did last week when he unveiled preparations for the next session of the Synod in 2018.

Words shape reality. The men of the Holy See know this better than anyone. St. Thomas Aquinas knew it, too, insisting that we use words carefully and precisely to define our terms.

If the pope wants to transform, enhance and reform the Synod of Bishops he might start by insisting that people clean up their language.

Are we currently witnessing a “golden age” of Holy See diplomacy?

That was basically the question Cardinal Pietro Parolin was asked this week at the forty-seventh World Economic Forum (WEF) in Davos, Switzerland.

The Vatican’s Secretary of State blushed a bit before then admitting that the church’s diplomatic activity had certainly “increased a lot” in the current pontificate.

“First of all, because of the personality of Pope Francis—this is clear! He’s a taken on a very great role of leadership concerning the global issues of the present world,” the cardinal said.

As just one instance, he pointed to the 2015 Paris Agreement to combat climate change, but without going into the extensive background of how the pope—through his encyclical, Laudato si’, and his various envoys—helped influence the accord.

What Cardinal Parolin did not say was that he, as the number-one papal envoy, is also one of the major reasons why the Holy See has become much more engaged in international diplomacy than it was during the eight years when Benedict XVI was pope.

Parolin, who just turned sixty-two last Tuesday, was appointed Secretary of State by Pope Francis in October 2013 precisely in order to revive the world’s oldest diplomatic corps and bolster its efforts at peacemaking and human development.

But the cardinal, self-effacing as ever, attributed all this to the pope. He noted that shortly after Francis became Bishop of Rome he told Vatican diplomats their main priorities must be fighting poverty, building bridges through dialogue, and working for peace.

Cardinal Parolin made his comments in an extensive interview (in English) with WEF’s Philipp Rösler, a Vietnamese-born German politician who was Angela Merkel’s vice-chancellor from 2011-2013.

The interview is not riveting, as far as entertainment value goes. But it’s definitely worth having a look for a number of reasons.

Firstly, because the Secretary of State offers some important insights into the underlying principles that are currently driving the Holy See’s efforts in the field of international diplomacy.

For example, he said the main point of Vatican diplomacy is to defend the human person based on the centrality of the person, the multi-faceted dimension of the person (especially transcendence), and the notion of solidarity/fraternity.

“If we do not understand clearly that we are brothers and sisters and that we are responsible for each other, I think other objectives will prevail and we will end up destroying the person and the community,” he warned.

Then he revealed (at least to those with eyes to see) perhaps the most important difference that distinguishes the current pontificate from the one that immediately preceded it—and not only in the field diplomacy, but also in the most basic approach to life, faith, and all reality.

“I also want to say”—the cardinal began—“that, as Pope Francis has said, it is important not to talk about mankind in general, as an abstraction, but to look into the eyes of every person and to be a spokesman for the individual person, especially the poor and most vulnerable. And so I think Holy See diplomacy should be very concrete diplomacy.”

(It is still a mystery why Benedict XVI appointed someone so unqualified to such a sensitive and important position. And even more mysterious is why the professor-pope did not replace Bertone when he turned out to be such a disaster.)

Bertone, under instructions of his boss in white, systematically disengaged the Holy See from cooperating with any international or state entities—on any topic—if they did not obey the Vatican’s line (directly from the Congregation for the Doctrine of the Faith) on the so-called “non negotiable” issues such as abortion, euthanasia, same-sex unions, and artificial insemination.

The Holy See stood aloof, in self-righteousness and with clean hands, leaving the messy and fallen “world” to sort out its mess all on its own.

But there is also another reason to have a look at Cardinal Pietro Parolin’s recent interview in Davos.

He stands to be a major figure at the next conclave when there will surely be a hotly contested debate over the future direction of the church and who is best suited to lead it.

The northern Italian, who is a native of the Veneto Region, has been one of Pope Francis’s most essential collaborators in his effort to renew and reform the Vatican and the entire church.

But the cardinal has done so in a quieter and less exuberant way than the charismatic pope. And that is much appreciated by those who find Francis a bit “out of control.” And, yet, Parolin completely shares Francis’s vision for a transformed church, as the pope outlined clearly in his blueprint document, Evangelii gaudium.

The cardinal also has been uniquely prepared, at least academically, to carry forward the most foundational reform that Francis has tried to set in motion.

When the young Fr. Pietro Parolin did his doctoral thesis at the Gregorian University in 1986 he focused on…  the Synod of Bishops.