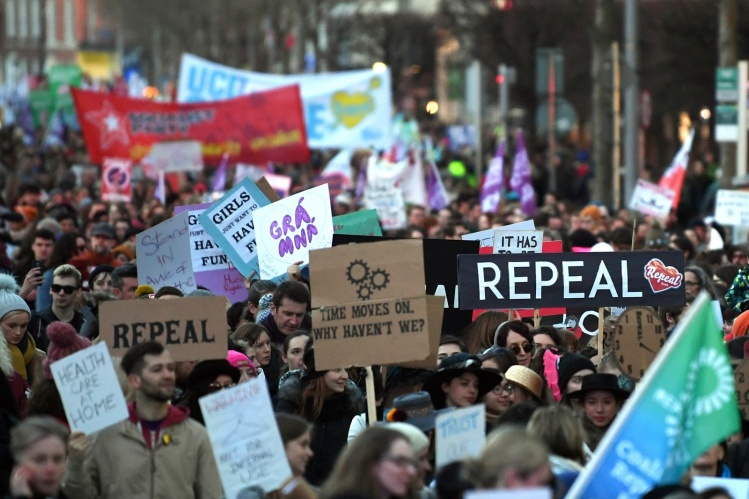 As a political science professor in Iowa, I have a front-row seat to that ballyhooed preliminary round of American politics, the Iowa Caucuses. From intimate living-room events with the long-shot candidates to big rallies organized by the frontrunners, the caucuses are a democratic spectacle. But in the end they’re merely one step in the intraparty process of establishing presidential nominees. Turning out in the midst of an Iowa winter every four years is not the same as a referendum, where all voters are directly deciding a matter before them.

Teaching in Ireland for several months recently, I was witness to the referendum on the Eighth Amendment to the Constitution of Ireland. With its language guaranteeing equal right to life of the mother and child, the Eighth, passed in 1983, effectively prohibited abortion, and initially was used to limit travel outside the country to secure an abortion—or even to receive information on such procedures. Under the Irish political system, any change to the Constitution of Ireland requires a majority via referendum. These democratic moments are made all the more powerful when they involve weighty issues that touch upon the political and social legacy of the people. In exit polls, strong majorities of Irish voters agreed that important issues should always be decided via referendum.

With 64 percent turning out to vote, Irish citizens chose to rescind the constitutional bar to abortion by a wide margin: 66 percent to 34 percent. And so the people of Ireland have empowered their government to enact laws providing for regulated legal abortion. In the run-up to the referendum, the government provided draft legislation to be introduced in such an eventuality. While details of the legislation remain to be finalized, the basic outline provides for abortion on demand up to twelve weeks, with more limited grounds for termination of pregnancy after this point; it also legalizes abortifacients that were previously illegal under the Eighth. It is fair to say that by the time of the referendum, the consequence of removing the Eighth had been made clear. “The people knew what we had in mind,” Taoiseach (Prime Minister) Leo Varadkar remarked when the votes were tallied. “I don’t think it would be right to depart from that at all.”

The sheer scale and scope of the support for repeal, while surprising to many, reflect an Ireland that is changing, both in its people and in its policies—from a significant decrease in church attendance and lower identification with Catholicism, to a rapid increase of secularism and economic prosperity. As Varadkar noted the day after the vote, “What we have seen today is the culmination of a quiet revolution that has been taking place in Ireland for the past ten or twenty years.”

Results of recent referenda, such as the 2015 vote on same-sex marriage—which saw Ireland become the first nation to recognize such marriages via referendum—might have presaged the outcome this time. Already in the 1990s, Irish voters supported lifting the travel ban for women leaving the country to secure an abortion, and also supported removing the ban on receiving information regarding abortion services while abroad. Yet anyone listening to voters tell their stories during the 2018 referendum campaign could be forgiven for thinking that the course of history seemed far from certain. Despite pre-referendum polls indicating a stable and significant lead for the repeal side, it was not unusual to hear people affirm the existence of a strong but shy “No” vote, and to predict that the result would be much closer than the polls indicated; belief that the “No” side could win was fairly widespread.

Campaign messaging blanketed Ireland’s landscape. Signs, ranging from simple sloganeering to pictures of a fetus in the womb, seemed to be on every lamppost, in city and village alike. And while Ireland does not permit radio and television ads during campaigns, a strong online advertising push micro-targeted potential voters on both sides. The sources of these online ads, as well as their funding, was a matter of much concern. The digital dimension of political life is largely unregulated by Irish law, and while Facebook and Google agreed to suspend such online ads in the weeks before the voting, targeted online ads still appeared.

Policies of past eras were the product of prevailing authorities; decisions were made for citizens and not by them (and particularly not by women), with appeals to authority serving as the only grounds for policy.
sharetweet

Another prevalent focus of campaign efforts was individual personal contact with voters. In the final weeks before the vote, thousands of volunteers took to streets, neighborhoods, and public transportation stations throughout the country. The debate over repeal followed some lines that would be familiar to Americans, and some that were more specific to the Irish experience. The “No” campaign focused not only on familiar and powerful arguments about the sanctity of life and the importance of compassion for the unborn child, but also on how Ireland should avoid the path chosen by the United Kingdom, whose laws regarding abortion are among the most permissive in Europe.

The campaign to repeal, meanwhile, highlighted the personal stories of women facing difficult situations, often called the “tough” cases, including those involving fatal fetal abnormalities. Repeal supporters also linked the vote to the practices and hard realities of the past in Ireland, casting repeal of the Eighth as both a corrective and a step forward on the progressive path of a contemporary Ireland catching up with the rest of Europe. An interesting subtext was the construal of Ireland as a nation that is maturing, and now able to make its own decisions. The implication was that the policies of past eras were the product of prevailing authorities; decisions were made for citizens and not by them (and particularly not by women), with appeals to authority serving as the only grounds for policy. The casting of the vote on the Eighth as signifying something much more than one issue—a vote, in effect, to unwind the past—was plainly part of the repeal campaign’s strategy, and personal stories became a way to anchor the effort. Exit polls suggest that the storytelling was effective; 43 percent of voters indicated that personal stories covered in the media influenced their decision, and 34 percent indicated that they were influenced by the experiences of people they knew.

According to the exit polls, support for repeal was widespread across virtually all socio-economic categories and demographics. The only age group not supporting repeal were those sixty-five or older, with 59 percent of these voters choosing to retain the prohibition. Repeal was strongest among the youngest cohort, with 88 percent of those eighteen to twenty-four supporting repeal. Support for repeal was higher among women, but still enjoyed strong majority support among men. The expected rural and urban divide failed to materialize, with 63 percent of rural voters supporting repeal, compared to 72 percent in urban areas. Ireland’s population distribution is increasingly dominated by its urban core in the greater Dublin area, whose population equals that of the next forty cities combined. Irish citizens for many years have perceived a growing divide in social and political terms between the capital and the rest of the country. But on this issue, the division turned out not to be the vast chasm many had supposed. Only Donegal, the largely rural northwestern edge of the Republic of Ireland, voted “No” at the county level, 52 percent to 48 percent.

Beyond age, sex, and the urban-rural divide, lower levels of church attendance correlated with support for repeal. With the one exception of Fianna Fáil identifiers (whose supporters were split evenly, despite the fact that their elected members in parliament mostly opposed repeal), those who identify as supporters of the other major political parties, and those of virtually all minor parties, supported repeal. The kind of clear party division so ingrained in modern American politics over abortion was not reflected in Ireland.

In the aftermath of the referendum, Ireland’s abortion policy is now likely to resemble that of many other Western European countries. This result may obscure the reality of public opinion in Ireland, however. The campaigns involved in referenda, especially on issues as contentious as abortion, can cloud difficult elements of the debate. Referenda, after all, assay voters within the framework of a binary choice—a choice that may neither best nor most accurately reflect the will of the people. This dynamic was on display in the battle over the Eighth. The repeal side often focused on the “tough” or high-profile tragedies; abortion on demand, including for reasons of convenience, was not usually the focus of the personal narratives that were employed—even though it is likely to be a common reason for termination of a pregnancy. Campaign pitches on the retain side, meanwhile, largely avoided the “tough” cases. And yet exit polls reveal that many voters desire a policy situated precisely in that murky middle—one that addresses the tough cases without going too far down the path of abortion on demand for mere convenience.

Whatever abortion policy emerges from the debates in the Irish parliament this summer, it will contain some element of compromise. After all, the historic vote on the Eighth didn’t explicitly adopt a policy; the referendum was not designed to deliver one. Rather, it served as an opportunity for the voters to directly and explicitly voice their view of change to the status quo. As such it represented a direct democratic moment for the people of Ireland. While many I spoke with lamented some of the tone and tactics of the opposing sides, from an outsider’s perspective the campaign was spirited and respectful. Given the atmosphere of American politics right now, that’s not something I’m sure I would be able to say, were such a referendum to take place in the United States.

Christopher Budzisz teaches in the Politics Program at Loras College in Dubuque, Iowa.