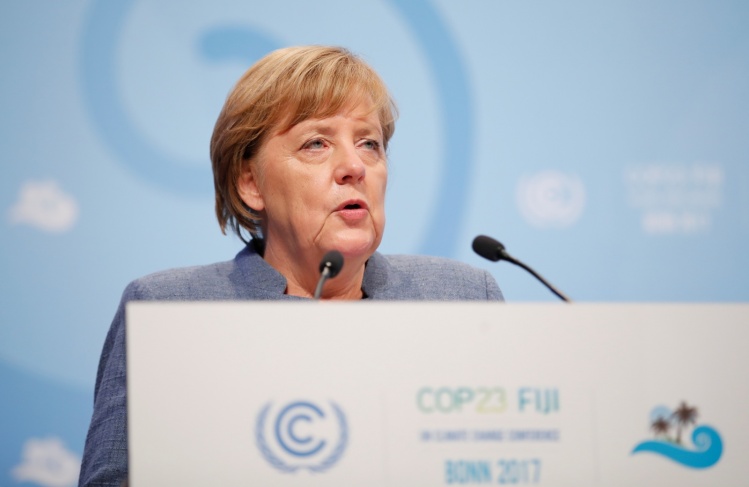 Full disclosure: this is not really from Germany. I left at the beginning of the month, when awareness of the coronavirus—compared to where we are today—was still in its infancy. Then it was just an extra set of questions at the airport (Had I been to China, South Korea, or Italy?); some free advice about hygiene on the plane (be sure to flush the toilet and wash your hands thoroughly); and a brief delay once we landed. Now we are in a near lockdown situation in many places in the United States, and in Germany, too, curfews and restrictions are the order of the day. Leaving Germany less than three weeks ago seems like a lifetime ago.

But having returned home, I find myself a little envious of the Germans. Last Wednesday, Chancellor Angela Merkel addressed the nation, and with exemplary brevity, calm, and compassion laid out the extraordinary challenge posed by the coronavirus, and the German government’s firm response. Justin Davidson, writing for New York Magazine, put it best: “Leader of the Free World Gives a Speech, and She Nails It.” “Without accusations, boasts, hedges, obfuscations, dubious claims, or apocalyptic metaphors,” he observed, “she did what a leader is supposed to do.”

Toward the end of her remarkably short speech (under thirteen minutes), having explained what she sees as a “historic task” unrivaled by any challenge since the Second World War, Merkel got personal, solemnly intoning “Ich appelliere an Sie” (I appeal to you).

Reflecting the address’s meticulous choreography, the camera then zoomed in to more tightly frame the chancellor as well as the historic Reichstagsgebäude (the seat of the German Parliament) just behind her. “Wir sind eine Demokratie” (we are a democracy), she reminded her listeners; “we don’t live by force,” but by shared knowledge and cooperation. This is pretty dramatic, because the burning of the Reichstaggebäude in February 1933 is iconic for the loss of Germany’s first democracy. Framed now by the simple black, red, and gold of the German flag at the Chancellor’s side and atop the Reichstagsgebäude (fairly recent appurtenances in postwar German political iconography, by the way), the message was clear: this time around it would be different.

Then came the most memorable lines.

“That we will overcome this crisis, of this I am completely confident,” she reassuringly declared. But she added this ominous caveat: “How high will the number of victims be? How many loved ones will we lose?” Looking directly into the camera, she calmly and firmly reminded her listeners that these answers depend rather directly on their (our) behavior.

It would be far too easy, and perhaps too obvious, to observe once again that Merkel is all the things Trump is not. The president’s daily sputtering and posturing at long-winded news conferences—a pathetic attempt to portray himself as a “wartime” leader—is just too easy a target. And at times like this, people can forgive a lot in a leader, including lack of poise and eloquence—which to some extent may explain the president’s higher approval numbers last week (up to 55 percent from 43 percent the previous week).

Merkel’s call to solidarity is bracingly poignant, but her urgent moral appeal to our interdependence and shared fate would frankly amount to nothing more than a nice speech were it not for other signs in Germany that democracy and standing together really do matter.

Who would have thought that seventy-five years after the end of World War II it would be the United States that would need to take lessons in democracy from Germany?
sharetweet

For this time of peril and mounting anxiety has in Germany become a moment not for scapegoating and exacerbating divisions, but rather one for strengthening democracy. The Bundesministerium des Innern (the German Interior Ministry) just took decisive action to disband a notoriously racist and antisemitic right-wing militant group known as the “Reichsbürger” (or Imperial Citizens’) movement. Early Thursday morning, in a coordinated operation that spanned ten of Germany's sixteen states, the ministry simultaneously raided the homes of twenty-one of the group’s leaders. Interior Minister Horst Seehofer, who has differed sharply with the chancellor on her liberal immigration policy, averred: "We will be relentless in continuing the fight against right-wing extremism, even in times of crisis."

Though he himself has flirted with right-wing nativism out of a fear of losing votes to the far-right Alternative fur Deutschland party, Seehofer resisted the temptation to instrumentalize the pandemic for political gain, choosing instead, as Deutsche Welle News reports, to “tackle racism, Islamophobia, and anti-Semitism following a string of deadly hate crime attacks over the past year.” Though progressive Germans tend to view this as the very least that should be expected of the minister (and they are right), Seehofer’s policy is nevertheless worthy of notice and commendation, if only because of the way it diverges from contemporary American politics.

At Friday’s press conference, in contrast, President Trump used his announcement to close the Mexican border as an opportunity to advance his xenophobic, anti-immigrant campaign. This is not to dispute the fact that closing the borders at this point has legitimate, public health justification—as the renowned immunologist, Anthony Fauci, explained later at the same briefing.

But Trump’s excessive rhetoric reveals his (and his administration’s) eagerness to exploit the current crisis for political ends that go far beyond the coronavirus. Referring to pre-crisis times, the president claimed, “Every week, our border agents encounter thousands of unscreened, unvetted, and unauthorized entries from dozens of countries. And we’ve had this problem for decades. For decades. You know the story.” His supporters surely do recognize this familiar narrative about disease-ridden and criminal immigrants and refugee seekers; but he’s not taking any chances, and so clarifies what is already implicit: “In normal times,” he asserts, “these massive flows place a vast burden on our healthcare system...”

Well, the fact is they don’t, and they haven’t. There is absolutely no evidence for this claim. But given the understandable focus on the pandemic today and the grim prognosis for the near future, many commentators overlooked this gratuitous, and oft-repeated, anti-immigrant rhetoric. But our recognition of the more obvious racism implicit in calling it a “Chinese virus” should not blind us to the president’s most recent swipe at Mexicans and those attempting to come to the United States via Mexico.

For Trump, immigration is itself a pandemic, and he seems almost delighted to be able to wield emergency tools recently made available to him against this long-standing bugaboo: “But now it’s—with the national emergencies and all of the other things that we’ve declared, we can actually do something about it. We’re taking a very strong hold of that. And we have before, but this is now at a level that nobody has ever approached.” The “it” and “that” of these statements is pre-crisis immigration from the southern border. Far from generously setting aside prior divisions and disagreements in order to focus on the new and imminent challenge, this would-be “wartime president” is simply using the emergency to advance an old agenda. It is “build the wall” sentiment only thinly disguised as pandemic management.

The news from Germany, on the other hand, despite some well-grounded concerns about a united Europe dissolving in the face of national border closings, is modestly comforting. At a time when fears could easily be exploited to fan the fires of xenophobia, Germany is offering not just words of genuine comfort from an eloquent chancellor, but also forceful actions by the Interior Ministry that give meaning to her clarion call for solidarity and democracy.

Who would have thought that seventy-five years after the end of World War II it would be the United States that would need to take lessons in democracy from Germany?