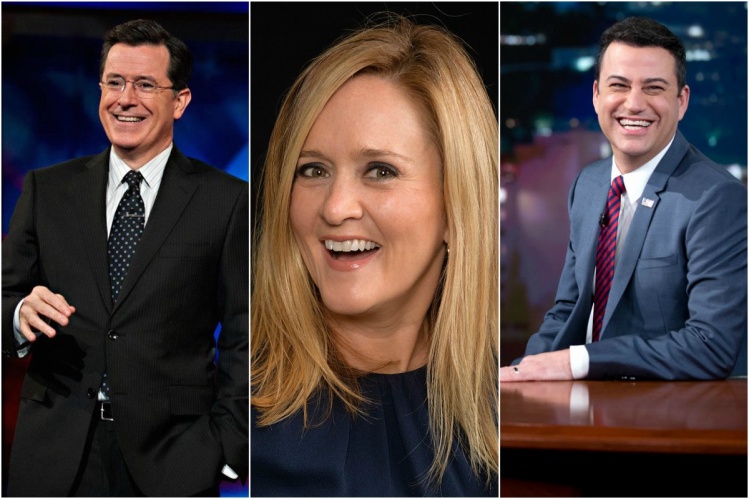 These days, I get mad a lot. I get mad when I hear about President Trump’s reckless, petulant, narcissistic tweeting, and madder when I read about his would-be sabotage of the Affordable Care Act. Coverage of his administration’s efforts to deny climate change, roll back environmental protections, and benefit the fossil-fuel and chemical industries makes me nearly Incredible-Hulk furious. I yearn to turn back time and alter the results of the 2016 election, but I can’t. So, instead, I watch Full Frontal with Samantha Bee.

Airing weekly on TBS, Full Frontal is a fast-paced late-evening comedy show much of which is devoted to skewering the Trump agenda. Hosted by the intrepid Bee, who wears a different eye-catching blazer each night, the show is pointedly political, unabashedly feminist, and often profane. Last year’s highlights included a withering takedown of the Trump administration’s “election integrity” commission and, just before Halloween, a stunt that involved ushering real-life climate-change skeptics through a possible-climate-apocalypse haunted house.

Bee is hardly the only TV comedian to focus on politics. Indeed, as many media analysts have already observed, late-night television has turned increasingly partisan since Trump’s inauguration—a striking development, given that, until now, such shows have been more interested in pleasing the broadest possible swathe of Americans. The host of CBS’s The Late Show with Stephen Colbert currently aims punch after satirical punch at the White House with an air of real conviction (though, alas, without the zing of his previous show, The Colbert Report on Comedy Central). This shift toward sharp-elbowed political commentary seems to have benefited The Late Show’s ratings, which had struggled early in Colbert’s tenure, when his tone was blander. In early 2017 The Late Show overtook NBC’s The Tonight Show Starring Jimmy Fallon and has been in first place ever since. Fallon, who sticks mainly to celebrity banter and music, had disgusted some viewers by giving Trump’s hair an affectionate tousle when the then-candidate visited his show in 2016.

Some of the most notable late-night political commentary has come from ABC’s Jimmy Kimmel, previously known as a prankster more in the vein of Fallon than of Colbert. The host of Jimmy Kimmel Live! tearfully denounced Republicans’ efforts to repeal Obamacare and, after the last year’s mass shooting in Las Vegas, appealed for gun-control legislation. When a senator broke his promise not to support any health-care bill that did not pass what he called the “Jimmy Kimmel” test, Kimmel called him out.

Given our society’s bitter partisan rifts, and a twenty-four-hour news cycle that never lets us forget them, why would audiences welcome late-night TV’s new obsession with politics? One answer is that, after a long convergence, politics and mass-market entertainment essentially merged in 2016. Trump would probably not be president were it not for The Apprentice, and he is still less interested in policy than in his ratings. The politicization of late-night is a natural extension of this phenomenon.

Another partial explanation: popular culture has broken up into niches in recent decades. Gone are the days when Americans watched three broadcast networks and The Ed Sullivan Show could divert the entire country. Now we have hundreds of channels, thousands of websites, and audiences can gravitate to those that share a specific outlook. The partisan drift of late-night television is just another kind of pigeonholing. That most late-night comedians are anti-Trump is hardly surprising. They are, after all, part of the media establishment he has railed against. The disdain is mutual.

The very fact that late-night television has been politically anodyne for most of its history makes it a particularly satisfying place to see full-throated expressions of dismay and indignation. It seems to reflect the urgency of the moment that a time-slot traditionally focused on fangless celebrity interviews and gags like “Stupid Pet Tricks” should be forced to attend, at least for now, to more pressing matters. A man obviously unfit for high office, who won the presidency while losing the popular vote, is now making a mockery of the United States. A dangerously unserious president has put our professional joke-tellers in a serious mood.

And finally there’s the matter of timing. Late-night shows air after most daily work has concluded. People watch these shows when they’re tired, often when they’re in bed. After another day of infuriating news, watching Samantha Bee or Jimmy Kimmel launch political zingers is a way for viewers, by proxy, to get in the last word.