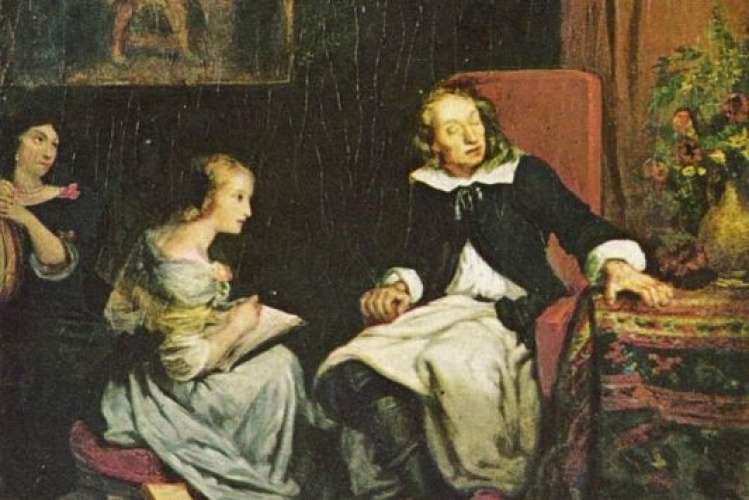 Suffering changes how you read poetry. For eight months out of the year, I work to show my undergraduates that literature matters—that it speaks to our lives, and that our literary heritage offers real answers to some of our deepest questions. But last fall, that lesson came home to me in a profound way when I taught John Milton’s Sonnet 19.

I had read Milton’s poem before, but now my wife and I had entered the long struggle with infertility, and his verses suddenly resonated with my real life outside the classroom. Angry with God and denied one of the fundamental missions of marriage, I found Milton speaking to me in his poem, offering his own difficult consolation for the pain of waiting.

At the age of forty-three, sometime early in 1652, John Milton went completely blind. He would never read on his own again. He would never again see and correct the drafts of his poems. He would even have to compose his greatest work, Paradise Lost, entirely by dictation. A brilliant and educated writer, Milton lived and breathed a life of letters; to gaze blindly ahead at decades of perpetual darkness and reliance on others must have been terrifying indeed. Out of this crisis sprung his famous Sonnet 19: “When I consider how my light is spent,” he begins, “Ere half my days, in this dark world and wide….”

Middle-aged, but with a sense that his best work was still to come, Milton feels the weight of his blindness stifling his God-given calling to write. He meditates on the parable of the talents in Matthew 25, but chafes at the seeming unfairness of God. Unable to return his gift to the Master with interest, Milton feels forced by his blindness to bury it instead:

And that one talent which is death to hide,

Lodged with me useless, though my soul more bent

To serve therewith my Maker, and present

Will I, Milton wonders, be cast out into the darkness with the unprofitable servant of Christ’s parable, when God himself withholds the ability to use my talent? “Doth God exact day labor,” he asks, “light denied?”

As my wife and I faced the facts of infertility and childlessness, I struggled like Milton with an apparently unfair God who made demands, but who withheld the ability to obey. Why could we not fulfill the command of God, repeated in Genesis, to “be fruitful and multiply?” As time wore on, I had settled into despondency, but in his agonized sonnet Milton now offered me a surprising answer: “God,” he writes, “doth not need / Either man’s work or his own gifts...”

It’s a humbling proposition, and a mysterious one, much like the answer God gives to Job. God does not, in himself, need Milton’s writing or my fatherhood. Our work and those gifts are in fact “his own” already. God is most satisfied, Milton goes on to suggest, with those who patiently accept his mysterious will: “who best / Bear his mild yoke, they serve him best….”

This sounds like the cold comfort of resignation—until Milton offers us the final metaphor of his sonnet. Speaking of God as a monarch ruling from the center of his court and kingdom, Milton writes:

Is kingly. Thousands at his bidding speed

They also serve who only stand and wait.

The King’s countless servants—both angels and men—already traverse the globe doing his will. But there are other ways to serve the Master: Milton’s metaphor of the royal court calls to mind the image of courtiers, pages, and other loyal subjects simply awaiting the King’s command. They wait, not in passive apathy, but with the attentiveness of which the Psalmist speaks in Psalm 123: “as the eyes of servants look unto the hand of their masters.” For Milton, those who wait in humble expectation are in fact actively serving God: “They also serve who only stand and wait.”

Fortunately for all of us, Milton did not have to wait forever. His blindness did not signal the end of his art, for he later went on to write his three most brilliant works. Doubtless, his private suffering shaped his depiction of the fall of man—a fall whose effects Milton bore in his body as he composed Paradise Lost. In our own journey of infertility, the suffering of our expectant wait continues. As we feel our way forward, sometimes blindly, through the mystery of God’s plan for our family, I carry Milton’s words with me into the darkness. Like him, we find ourselves wondering how we can serve the Master with our talents. And like him, for now we will stand and wait.

Kelly Scott Franklin is an assistant professor of English at Hillsdale College, and writes on topics of literature, culture, and faith.