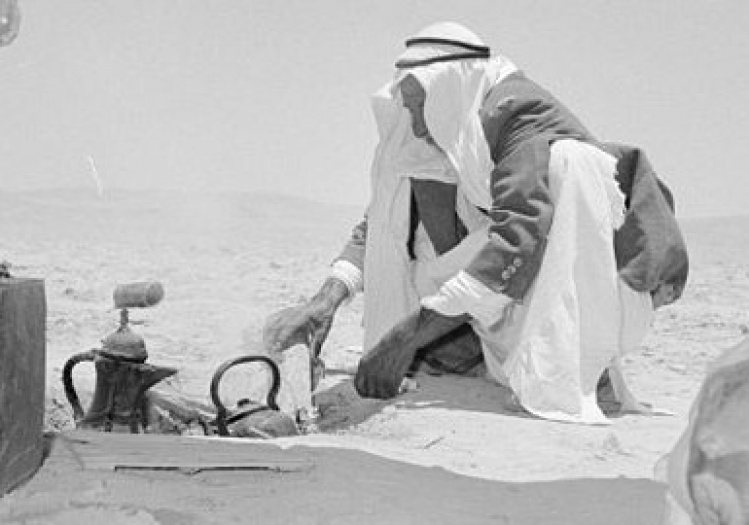 I’m sitting on the hotel step with today’s Scripture readings in front of me when Salah, the Bedouin guide, arrives. It’s Sunday, and there are no churches in the town of Wadi Mousa, in southern Jordan. These readings are the nearest I’ll get to Mass today. Salah is taking me on a day’s tour of the Wadi Rum, the vast area of mountains and sand that runs between Aqaba and the ancient city of Petra. He wears traditional Bedouin garb: red and white keffiyeh wound around the crown of his head, and a long black garment with loose white trousers underneath. He sports a thick black moustache.

We start off in a jeep. Soon Salah pulls in at a roadside establishment and gets out, explaining, “Bread for lunch.” Shortly before, he had uttered a wet sneeze into his hand, and something lurches inside when I realize that hand will hold the bread I’ll be eating. It won’t come in cellophane. As I grope through my fanny pack for hand sanitizer, he returns, swinging a bag with a round flatbread inside. He tears off a chunk, breaks it into two, and passes one piece to me through the driver’s window. The bread is still warm, and it’s crusty and chewy. “Not made in bakery,” he says. “Made in fire. In the ground.” My day has begun with the breaking of the bread after all.

The vehicle turns abruptly from the four-lane Desert Highway and onto a sand dune. Far ahead are misty blue mountains, and nearer, giant mounds of jumbled rocks. This is Wadi Rum, a twelve-kilometer-square expanse of jagged rock and sand. It is also the ancient route over which caravans of camels carried spices from the east through the Negev Desert to the port of Gaza. Salah, who was born in a cave near Petra, now makes a living as a tour guide in this stretch of land.

The jeep shakes us across ridges and bounces us up and down dimpled sand dunes. Midway through the morning we stop for tea. In the cool shadow of a mountain, Salah sets down three rocks, in the center of which he places dried bush branches and lights a fire. Cross-legged and unhurried, he pours water from a bottle into a small black pot, which he balances on the rocks. When it boils he adds tea leaves and sugar. “That’s how our father teach us to make the tea,” he tells me. This is the hospitality of the desert, extending back generations. I think of Abraham, who received three strangers in a similar barren setting. Salah brings another hunk of bread, which he sets on one of the rocks. When it becomes crisp, he breaks it and hands a piece to me. Only afterward do I realize I haven’t given hand sanitizer a thought.

Like a bouncing ball, we continue across the ridges and up and down the dunes. Salah stops the car at the side of a mountain and points out white etchings, thousands of years old, depicting camels and horses. At another stop, where camel men are awaiting tourists, he encourages me to take a ride. All I can offer is a five-dollar bill. After my jaunt astride the camel, Salah says, “For this ride you make the man a living.”

Lunch takes place in an open cave, and the rock hangs over us like a tent awning. Salah again makes a fire and then brings out food. He spears onions and tomatoes and sets them over the rocks that contain the flames. He pulls a knife from its scabbard and cuts chicken into pieces, then places the pieces to cook inside a wire basket. With a deft hand he cuts up tomato and cucumber, pours tahini, squeezes lemon juice. Again, I think of Abraham and his guests: fire is prepared, bread is baked and meat cooked. And Sarah will become fertile...

As we continue jiggety-jogging through the sand, among the craggy rocks, the centuries seem to vanish. I ask Salah how he knows his way around the immense barrenness of this land. “By the mountain,” he replies. I think of the Magi who came from the east, perhaps across this very land. But it is Abraham, Sarah, and their progeny who remain with me: I think of the Word made flesh, who, not too far away, pitched his tent among us.