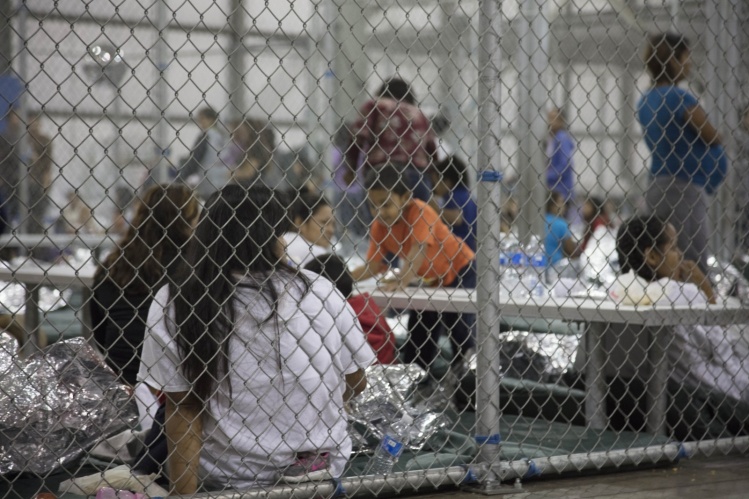 In June 2019, a lawyer stood before a judge to argue that the U.S. government is obligated to provide asylum-seeking detainees with a bar of soap and a toothbrush. The law calls for detention centers that are “safe and sanitary.” At the time, thousands of detained refugees lacked those basic necessities. The court determined that toiletries could indeed be included under that standard. Reports of this hearing caused a public outcry. Many Americans were shocked to learn, from this story and others like it, how the federal government had been dealing with the influx of refugees and migrants at the southern border.

The argument over who built the cages that many asylum-seekers were herded into remains one of the more disturbing episodes of the Trump era. In fact, the cages were built before Trump’s election. But the Trump administration, and in particular former Attorney General Jeff Sessions, exploited existing rules in order to fill those cages with an unprecedented number of refugees, separating families in the process. They hoped this policy would deter future refugees. After one hundred days in office, the Biden administration has a mixed record of improving conditions inside the detainment facilities. He had waffled on his promises to raise the number of refugees accepted each year into the United States, a measure that would alleviate the congestion within those facilities. The arrival of unaccompanied minors at the border adds a new dimension to the problem, and in recent weeks the Biden administration has transferred many such detainees from crowded facilities run by the Department of Homeland Security to ones run by the Department of Health and Human Services, with little improvement in living conditions.

A year ago, I sat down with Maria (not her real name), a Salvadoran woman in her mid-twenties who crossed the border into Texas about a month before the infamous soap-and-toothbrush hearing. After a day of roaming the desert, Maria was picked up by Border Patrol. For the next six months, she would be held in four different detainment facilities. She asked to share her story, in the hope that those who heard it would have a better moral grasp of the real situation at the border.

After being brought into custody, ID’ed, and registered, Maria was taken to what detainees call la perrera, or “the dog pound.” The name refers to a type of detention facility that houses several chain-link cages that look like kennels. More than a hundred detainees are kept in each of the cages for days or weeks at a time. Border agents took Maria’s belongings and gave her some clothes to wear. She arrived from her journey “dirty, scraped,” but could barely wash. She couldn’t find toilet paper or sanitary napkins in the bathroom. Though tired from her journey, she found it difficult to sleep. There wasn’t much room to lie down in her crowded cage. Someone was always talking or sobbing. Guards would make blaring announcements via megaphone. They might enter at any time, day or night, escorting people away or bringing new people in. The stench was often overwhelming; the guards who patrolled the perimeter covered their noses with facemasks. (This was before the pandemic.) The food was always the same: a mortadella sandwich, delivered three times a day: 10 a.m., 5 p.m., and 1 a.m. The 1 a.m. meal Maria considered a sort of punishment—one more thing that made it impossible to sleep.

Maria shared her story in the hope that those who heard it would have a better moral grasp of the real situation at the border.
sharetweet

Despite these conditions, Maria was able to connect with people around her. “I would cry alone,” she said, “but I would join support groups for others who were crying.” She found people to pray with. The perreras are segregated by sex, so all of Maria’s fellow detainees were women, except for boys aged ten and under, who stayed with their mothers. Some women were pregnant: “Watching pregnant women cry from hunger was very hard for me.” Maria was dismayed to learn that detainees could remain in la perrera for as long as ten days. This was long enough for them to develop sores on their back and in their mouths, long enough for measles to spread throughout the detention facility. (And, more recently, Covid. On March 25, 2020, ICE confirmed its first infected detainee. By August, 4,038 detainees in eighty-one facilities were diagnosed with the disease, alongside forty-five ICE detention staff. As of March 1, 2021, a total of 9,659 detainees have tested positive for the virus, and nine of them have died.)

After eight days, Maria was transferred to another detention facility, a type known among detainees as la hielera, or “icebox,” because the air conditioning runs at all times, pumping freezing cold air into a crowded room. At this point, Maria had yet to meet with a lawyer or social worker, or have a hearing scheduled. She had no idea whether her claim for asylum would succeed. Her transfer to another facility began to make sense to her: her time in detention was a form of deterrence. “For [the detention] to have an impact,” she told me, “it has to be something very tough.” But Maria remained hopeful about applying for asylum; at the very least, she wanted to try.

Hope must have been harder to find in la hielera than in la perrera. The cold was constant, and the aluminum-foil space blankets provided to the detainees were not always enough to keep them warm. Some detainees got dehydrated—you don’t think to drink water when you’re freezing—which led to constipation. People around Maria were getting sick. Doctors would treat patients in full view of everyone. The place was also overcrowded; Maria says her holding cell had capacity for eighty people but contained almost twice that number. Even worse, the average stay at la hielera seemed to be longer than at la perrera. Maria met people who had been there for more than a month. The lack of contact with the outside world, along with a lack of sunlight, made it hard to count the days. Even in this environment, however, Maria was able to make friends and to pray. She is Catholic, but during this time she learned from friends how to pray alabanzas, an Evangelical style of praise and worship.

“We had to line up along the red line, hands against the wall,” Maria recalls about her third house of detention, a larger facility an eight-hour bus ride away. Here she was given a uniform to wear—white shirt, blue jacket, blue pants—after a twelve-hour entry process that included fingerprinting, body searches, x-ray scans, and interviews. She slept in a dormitory that housed eighty or so detainees, on bunks with sheets and pillows. The bunks were very narrow, and those who slept on the top bunks were afraid of falling; someone had actually fallen to the floor in their sleep. People would fasten themselves to their bunks by tying big knots with their bed sheets. Here Maria was finally able to do things she hadn’t been able to do for weeks. She showered (there were bathrooms within the dormitories). She went outside for recreational activities. The food tasted better. Detainees were given the option of joining a Bible study group. But every time Maria left the dormitory for anything, she would hear the same words: “Line up along the red line, hands against the wall.” The guards had to search her first.

How do we want our society to be judged? How does it first appear through the eyes of someone like Maria?
sharetweet

Two good things came from Maria’s time in the third facility. First, some of the other detainees in her dormitory became friends. They came from many different countries: “Cubans, Venezuelans, Central Americans.” She also met people from places as far away as China, Russia, and Africa. The second good thing was Maria’s first phone call home. The facility allowed each detainee a three-minute phone call. Maria had spent a total of twenty-six days in detention. At this point, she still didn’t know whether she would be able to claim asylum, and had yet to meet with a lawyer.

She would spend another four months and two weeks at her next stop—a private detention facility in a different town. This is where Maria was finally able to make her case before a judge. She describes the private detention facility as both “elegant,” and “highly disciplined.” It had nicer amenities, better food. She was provided with an ID card and six changes of clothing. The guards were more pleasant, too, though they could be addressed only as Mister or Miss (they didn’t wear name tags). Detainees were able to get jobs within the facility. Maria worked in the kitchen and was paid $1.50 an hour. Some of the other jobs—working in the laundromat, for example—paid even less. Church services, both Protestant and Catholic, took place in the cafeteria every Sunday.

Despite these improvements, Maria’s existence was in many ways still like that of a prisoner. She had to stand up and be counted by the guards every day. Her time was structured by the facility. She had to follow pre-established cooking instructions in the kitchen, making the same bland food day after day. Maria got to know one of the guards, but she was not allowed to ask for her name, much less keep in touch with her via Facebook. The harsh discipline eventually began to take a toll: often, Maria did not even want to leave her room. A fellow detainee tried to kill herself. Maria learned that there had been a suicide at the facility shortly before she arrived. Her own story, however, would end happily: she obtained asylum and was released. She is now living in a small town in New England, working as a cook.

There’s a reason I haven’t mentioned why Maria came to the United States. It matters to her, of course, and to the judge who heard her asylum case, but it should not matter to those who work at the detention centers, or to the politicians who decide what those centers will be like, or to the voters who elect those politicians. We all have a moral obligation to provide detainees with humane conditions regardless of where they come from or why they left. Nor is the cost of such conditions exorbitant. “We need an Ellis Island–type system of processing centers,” an immigration lawyer who spent several years working at the Texas border told me. “Instead, we treat all asylum-seekers as criminals.”

“The degree of civilization in a society can be judged by entering its prisons,” Dostoyevsky supposedly said. As it turns out, he may not have, but the line remains popular because it rings true. We should broaden this observation to include refugees and migrants. Beyond the political blame-game and the policy details, there lies a basic moral question: How do we want our society to be judged? How does it first appear through the eyes of someone like Maria?