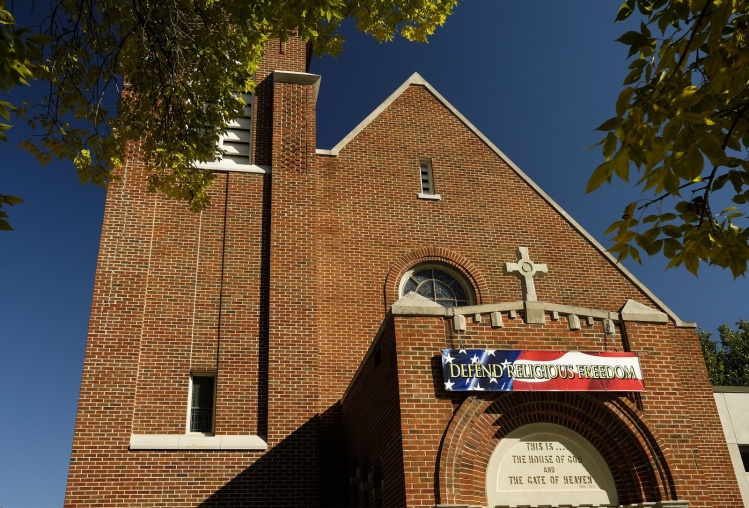 Catholic bishops have not pushed to end the Johnson amendment, but their religious-freedom campaign has found allies among advocates for repealing this 63-year-old law that bars nonpr

Now that there is a real possibility that Congress and President Donald Trump could eliminate the Johnson amendment, religious leaders who have supported or quietly condoned this effort may want to consider the consequences and speak up. They can look to the secular nonprofit world for some guidance on why lifting this restriction would end up hurting them.

The National Council of Nonprofits is one of the major voices against repeal of the  law, which bars 501(c)(3) organizations from participating in electoral politics “directly or indirectly.” In April, the council was among 4,500 nonprofits to sign a “community letter” urging congressional leaders to back off from any repeal:

Nonpartisanship is a cornerstone principle that has strengthened the public’s trust of the charitable community. In exchange for enjoying tax-exempt status and the ability to receive tax-deductible contributions, 501(c)(3) organizations – charitable nonprofits, including religious congregations, and foundations – agree to not engage in “any political campaign on behalf of (or in opposition to) any candidate for public office.”

That provision of law protects the integrity and independence of charitable nonprofits and foundations. It shields the entire 501(c)(3) community against the rancor of partisan politics so the charitable community can be a safe haven where individuals of all beliefs come together to solve community problems free from partisan divisions. It screens out doubts and suspicions regarding ulterior partisan motives of charitable organizations, as undoubtedly would occur if even just a few charitable organizations engaged in partisan politics. Nonpartisan credibility is critical to the ability of 501(c)(3) organizations to work with elected officials of all parties at the local, state, and federal levels to address community needs.

Nonetheless, one of the letter’s recipients, House Ways and Means Committee Chairman Kevin Brady, a Texas Republican who includes his Catholic parish in his official bio, slipped a provision into the House-passed tax bill to repeal the amendment. It’s not in the Senate version, at least not yet.

Without the Johnson Amendment, it will be much easier for politicians to pressure leaders of nonprofits, including churches, for endorsements and contributions.
sharetweet

The Johnson Amendment owes its name to another Texan, Senator Lyndon B. Johnson, who introduced the measure in 1954. It was accepted into a tax bill without discussion—and it was not presented with the aim of walling off church and state. In fact, it was a response to McCarthyism: Johnson was concerned that Texas oilman H.L. Hunt was funneling huge sums of money into right-wing nonprofit organizations backing hardline anti-communist candidates, according to a paper by researcher James D. Davidson. Johnson faced such a challenge within his own Democratic party in Texas, where Dixiecrats opposed him.

Although the initial intent was to cut off tax-exempt political donations, the debate in recent years has focused on whether the Johnson measure chills the First Amendment rights of religious congregations. In an interview with EWTN twelve days before Election Day last year, Trump said he decided to seek the amendment’s repeal after clergy members he met with said they could not endorse him because they feared losing tax-exempt status. He has since vowed to “destroy” the amendment—and in May addressed the issue in an executive order that turned out to have little practical effect.

The flip side is that without the Johnson Amendment, it will be much easier for politicians to pressure leaders of nonprofits, including churches, for endorsements and contributions. The partisan fallout would be especially damaging to churches, since many people have left organized religion over political grievances. It would raise suspicion that donations might be used for disagreeable political purposes. Even if the Internal Revenue Service hardly ever enforces the Johnson Amendment, it acts as a brake on those clergy most tempted to intervene in elections.  As it is, both Catholic and Protestant leaders have turned off many people with quasi-endorsements of specific candidates instead of limiting themselves to broader moral pronouncements. The bottom line, even more so for churches than for secular nonprofits, is that nonprofits squander their credibility when too directly engaged in partisan politics. Public opinion heavily favors keeping the Johnson Amendment, including among white evangelical Protestants, polls show.

Archbishop William Lori of Baltimore, who heads the U.S. Catholic bishops’ Ad Hoc Committee for Religious Liberty, has been wary about supporting repeal of the Johnson Amendment, saying that the bishops have discouraged pastors and other church representatives from endorsing candidates. But in an interview with Crux in May, he was far short of opposing repeal, saying, “the Johnson Amendment repeal is really not front and center for us at all.”

Ending the Johnson Amendment may not be the bishops’ great concern, but it is a big ticket item for the larger coalition for religious liberty that they have joined with evangelical Protestant organizations. One ally in that battle, the nonprofit Alliance Defending Freedom, is a leading opponent of the Johnson Amendment. It organized “Freedom Pulpit Sunday” for pastors to speak out.

Religious freedom, like other First Amendment rights, surely needs its defenders. But the Johnson Amendment is about politics, not religion, and it is best viewed in that light as Congress decides the measure’s future in the coming days.