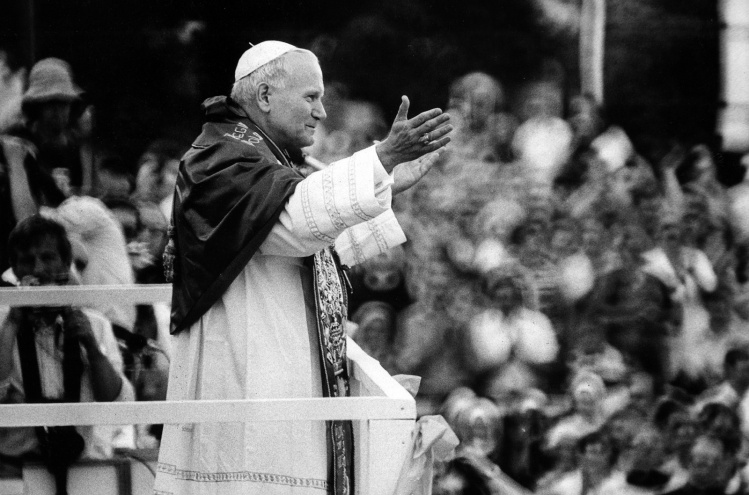 Pope John Paul II will be remembered for his service as a public witness who, by the strength of his personality and intellect—and the scope of his office—was able to command the world’s attention. Simply by traveling, as pope, he reinforced the concept that Catholicism is a church of the world, both in breadth and, increasingly, in orientation.

He worked tirelessly to proclaim the truth about human freedom, the common good, and the nature of the human person, and his genuine pastoral stature often carried the day, even when the specifics of this “truth” were questioned. While Vatican watchers will observe that his papacy was a “referendum” on Vatican II (and it was), for rank-and-file Catholics, the spotlight was less on the church in the modern world as a source of “joy and hope” than on John Paul II himself as a media celebrity. In the end, this actor-turned-pope didn’t need to render a verdict on Vatican II—he simply upstaged it.

And his will be a hard act to follow: the footlights are bright with public attention, the script well known, and the chorus voices primed for their cue. What will endure, the extraordinary Catholic humanism that gave such integrity to his vision, or the dogmatic certainty, which too often gave a narrow and even sectarian cast to an otherwise generous catholicity?

The gift of this papacy has been its public face: the stadium Masses, the youth gatherings, and the worldwide attention for its message. Of course, popular acclaim did not automatically translate into popular conversion: it wasn’t hard to find dissent from the church’s moral teachings among the crowds shouting “John Paul II, we love you!” Yet the spiritual power of this man was undeniable, evidenced by a genuine engagement with papal teaching on the level of the person, a flowering of lay groups (generally conservative), and, in many quarters, a renewed appreciation of traditional forms of piety.

The spiritual power of this man was undeniable
sharetweet

Notice, though, that this renewal often followed a wheel-and-spokes pattern, a structure that connects the individual believer to a powerful central individual, but one that does little to stabilize the structure in a three-dimensional way. The spokes have little relationship with each other.

Lost in this powerful image, particularly in the United States, is the “Catholic” story on the ground, the detail of parish and diocesan structures, the struggle of the parochial schools, the work of Catholic Charities and the outreach of Catholic Relief Services. The visual account consists on the macro level of the pope’s public story as a moral leader, and on the micro level of those who respond (or don’t). Yet the institution itself is not visible. (Functioning institutions, particularly those featuring elderly men in cassocks, don’t make for good television.) Catholicism as devotion plays well in living color; Catholicism as institutional life badly needs another trip to make-up.

Yet it is precisely this institution as institution that needs to exemplify “catholic” integrity. Early in this pontificate, that institutional question was more clearly addressed in papal teaching on social justice and in diplomatic pressure in Eastern Europe. Intellectually, the extraordinary scope of this integrity was on ample display in papal teaching on relativism, on the relation of science and religion, and on the human person as a moral actor.

But “teaching” also happens in the structure of church life and community, and here John Paul’s vision was not as successful. He could not translate his diplomatic gifts to his native Poland into the society he hoped would emerge, as liberated Poland increasingly adopted the secular mores of its neighbors to the West. He reached out to Judaism as Christianity’s “elder brother in the faith,” but his efforts with Orthodox Christianity met with mixed success, and the Anglican Communion drifted away. He could carefully select bishops—men of genuine character and holiness—but he could not teach them to trust one another, or to engage in real dialogue, or to structure their own deliberations. Neither are these skills passed from bishop to priest, and when words like “dialogue” and “deliberation” and “structure” are voiced by the laity, they are berated by the clergy for importing ideas foreign to “orthodox” Catholicism.

The Catholic witness to the value of human life—whether unborn, poor, reviled, or impaired—is an important cultural good and has been a central theme of this papacy. This witness does not primarily reside, though, in individuals. Rather it is supported and promoted by institutional structures: hospitals, relief organizations, charitable storefronts, and public agencies. These institutions include the web of relationships—not merely bricks-and-mortar—that make possible the “heroic” efforts of men and woman.

The late pope’s long decline has been embraced in a further deepening of the cult of John Paul II, as his dogged willingness to place the term of his service in the hands of God has thrown the personal dimension of the papal office into high relief. One might argue, though, that his papacy is not served well by the end of the story. While there is an important message being conveyed about the absolute value of human life, it is somewhat compromised by a parallel message about the absolute value of papal power. The papal office rightly has the arc of a real human life, but a Catholic institution should bear the stamp of this arc, not be eclipsed by it.

Over and over again, Pope John Paul II returned to his opening line, “Be not afraid,” the commission given by Christ to the ragtag group he called to carry on after his death. Let this be the Holy Father’s epitaph as well. Let this moment be our commissioning, a call to listen to this extraordinary life, and then arise.

Click here for other reflections on the papacy of John Paul II.