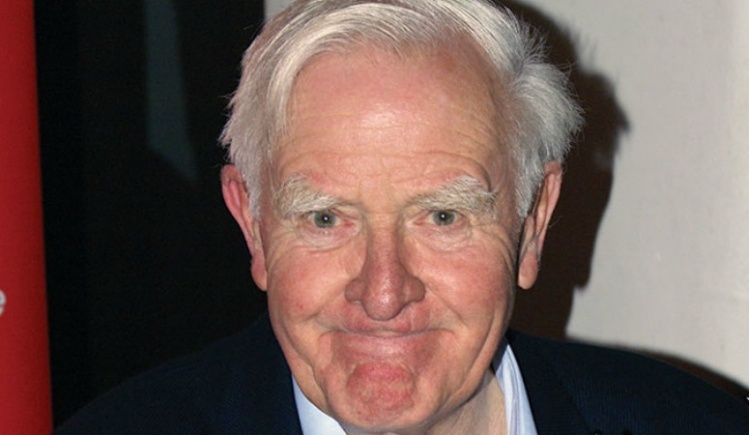 John le Carré—born David Cornwell in Poole, Dorset, in 1931—is a handsome and charming cartoonist, actor, mimic, raconteur, and linguist. He was also an expert skier and spy. His mother deserted her two sons and ran off with her lover when he was five years old, and the search for love and the theme of abandonment recur in his life and works. His charismatic, con-man father, Ronnie, could “rob you and love you at the same time.” Le Carré’s first wife thought Ronnie was absolutely evil; le Carré fantasized about killing him and his attempt to escape his father’s influence was the crucial story of his life.

Ronnie Cornwell had three wives and several children, molested his son, shared a bed with a wife and mistress, was unfaithful and brutal to all his women, and infected le Carré’s pregnant mother with syphilis. Ronnie’s friends were sinister, his associates violent. Le Carré and his older brother lived like millionaires when Ronnie’s plots paid off and he acquired racehorses, vast properties, and as much as £191,000. They lived like paupers when—as often happened—Ronnie was caught, convicted, and imprisoned. Everything about Ronnie was fake. His grand office, chauffeured Bentley, and box at Ascot were hired for the occasion and never paid for. Ronnie borrowed and then disposed of paintings, sold land he didn’t own for a development scheme in Toronto, ran guns and ran from the police. He passed as an agent for a Malayan sultanate that had ceased to exist and defrauded many victims in Indonesia, Singapore, and Hong Kong. Some marks found him so attractive that they actually took pleasure in being swindled. One of Ronnie’s jailers said he was “one of the finest men I ever met” and planned to hand over his own money to Ronnie as soon as he was released. Le Carré felt liberated, even jubilant, when his father died. He portrayed Ronnie in A Perfect Spy and Single & Single, about a father-obsessed son who “discovered the monster who ruled his life was just another sad and empty little man.”

Le Carré left Sherborne School before his final year. He attended the University of Bern, where he first began to work as a spy, and interrogated refugees for army intelligence in Graz. It’s not clear how he perfected his German accent when living in Switzerland and Austria. He also left Lincoln College, Oxford, before his final year; married the rather proper daughter of an air vice-marshal; taught school for a year; returned to Oxford, where he earned a first-class degree in German and French; and taught at Eton. He then joined the Foreign Service as cover for spying, and in Bonn collected intelligence and ran covert operations. In a bitter summation of his early years he exclaimed, “I hated teaching at Eton, was deeply depressed by the Foreign Service, and still have my gloomy memories of Sherborne.”

But, according to le Carré, these early years formed him as a writer: “Nothing I have ever written in my life has been free of the German influences of my youth.” In his new biography, Adam Sisman does not specify which books le Carré studied at Oxford or taught at Eton. He doesn’t mention Rilke and Kafka, merely notes Grimmelshausen and Schiller. But Thomas Mann’s Confessions of Felix Krull, Confidence Man would surely have appealed to le Carré.

Though le Carré grew up in Nonconformist Congregational Chapels, he twice found solace during retreats in the Franciscan community at Cerne Abbas, Dorset. He became a close friend of the actor Alec Guinness, a Catholic convert who’d played le Carré’s Smiley in two films. The older man assumed the role of confessor, “a sort of Father Brown figure.”

Le Carré felt that Ronnie, who’d coerced and involved him in his schemes, had trained him from childhood in deception, betrayal, and lies, and taught him to have “a hidden life of outward conformity and inner rebellion.” He thought that spies, like novelists, were not meant to tell the truth. Sisman, noting his subject’s contradictions and mythical stories of his own life, does not say if they are based on false memories, heightened imagination, or deliberate mendacity. Le Carré confessed that after a lifetime of subterfuge “he no longer knew what was real and what was not.”

He was born with the essential qualities of a spy: “class resentfulness, predilection for secretiveness, yearning to belong” and willingness to sacrifice moral standards. Sisman writes that le Carré’s French pseudonym “remains obscure.” But to have a tête carrée is to be level-headed, stubborn, and blunt—to be someone with the right stuff for espionage. He has always been hush-hush about his experiences as a spy, but he did reveal, “I ran one of the most prolific and successful agents for the better part of two years without mishap.”

WHEN LE CARRÉ was snooping in Bonn a series of dramatic events stimulated the public’s response to his third novel and first spectacular success, The Spy Who Came in from the Cold (1963): the erection of the Berlin Wall, the Cuban missile crisis, President Kennedy’s famous Ich bin ein Berliner speech, John Profumo’s sex and spy scandal, Kim Philby’s sensational defection to Russia, and the assassination of John Kennedy. Le Carré’s main literary influences were Joseph Conrad’s moral ambiguities in Lord Jim and The Secret Agent, Somerset Maugham’s spy stories in Ashenden, and Graham Greene’s The Quiet American and Our Man in Havana. But le Carré invented the literary spy thriller, which made the glamour and heroics of the contemporary James Bond novels seem absurd and obsolete. Le Carré’s spies, seedy and squalid, unscrupulous and incompetent, all seemed to smell of failure. Greene called the novel “the best spy story I have ever read.”

The novel was translated into thirty languages and sold a million copies. Like Byron, le Carré awoke to find himself famous. As the money poured in, he generously supported his relatives, many of whom had been cheated by Ronnie. He bought a Rolls Royce and some valuable art, extensive property on the cliffs of the south Cornish coast, a ski chalet in Switzerland, and a house in Hampstead. He also gave away £2.5 million, mostly to Cornish charities. But he confessed, “the sudden wealth, the fame, the recognition of his talents led to a deep and tragic change.”

Needing a different woman for each big book, le Carré had love affairs with a married woman in Bonn and a Swedish student in Lund. During “six months’ madness” he slept with any woman who would have him. His most serious affair was with Susan, the wife of his best friend, the novelist James Kennaway, which ended when Kennaway died in a car crash. Susan looked remarkably like his own wife Ann. His long-soured marriage, which had produced three sons, finally broke under the strain. Sisman says very little about the second wife, with whom le Carré had a fourth son. She’d worked in publishing and typed his manuscripts. Unlike Ann, she agreed to share him with other women and tolerated his infidelities.

He said his hopelessness about his first marriage and utter solitude drove him to write. He gives his characters bits of himself so he can better understand them. Like Balzac, he often has the same character recur in a series of novels. He writes fast and revises extensively, stops when he’s making good progress and can pick up the next day. He advised a young writer to “begin the story as late as you can, write out key sentences and put them on the wall; rewrite; don’t be afraid to throw away eighteen months’ work.” Before publication he solicits comments from trusted advisors, but when a friend once responded with harsh criticism he severed relations.

Le Carré granted Sisman access to his archives, provided introductions, and granted several long interviews. Sisman’s many distracting footnotes should have been incorporated into the text, put in endnotes, or omitted. His discussion of the novels—composition, publication, reviews, sales and royalties—is tediously repetitive. But his biography is intelligent, thoroughly researched and well written, and it’s especially good on the transformation of the novels into films.

In 1989 I had an angry exchange of letters with le Carré about my proposed biography, which he first allowed and then forbade. Later, he either forgot or forgave our quarrel and sent me two long handwritten letters. In a letter about Somerset Maugham as a spy during the Russian Revolution, le Carré got the facts completely wrong and condemned Somerset Maugham’s brave and brilliant counterrevolutionary work: “I know that he was held to have made a complete hash of it, and behaved with a marked absence of courage.” In an earlier letter about Orwell (real name: Eric Blair) at Eton, le Carré wrote, “It always amused me that Blair-Orwell, who had been to Eton, took great pains to disown the place, while Evelyn Waugh, who hadn’t been to Eton, took similar pains to pretend he had.” He added that “Orwell remains an ideal for me—of clarity, anger, and perfectly aimed irony.”