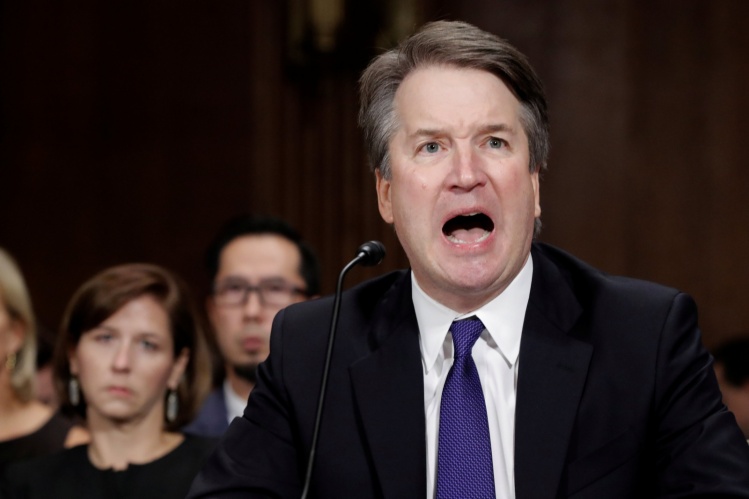 At her September 27 appearance before the Senate Judiciary Committee, Christine Blasey Ford was asked what she remembered most about her alleged sexual assault by Supreme Court nominee Brett Kavanaugh and his friend Mark Judge in 1982. It was the laughter, she said, “indelible in the hippocampus...the uproarious laughter of the two, and their having fun at my expense.” This was one of many heartbreaking details in a morning’s worth of forthright testimony, whose tone and substance led a number of observers to call Ford, who is a professor and research psychologist, “incredibly credible.” She was nervous but cooperative, explaining that she was there to do her civic duty. She was also courageous: she had little to gain by speaking publicly about the attack and its traumatic effects. In so doing, she also inspired other survivors to come forward on social media and the airwaves to share similar experiences, many breaking years or decades of silence.

Kavanaugh displayed no such poise or sense of the world beyond himself. His opening remarks, all partisan fury, sniveling self-pity, and distortion of the truth, set the tone for the afternoon. Exhibiting petulant disdain for Democratic members of the committee, he came off as nothing so much as the entitled adolescent he memorialized in a summerful of calendar entries, unable to believe his parents are about to ground him for the weekend. He raged at the prospect of being deprived of a job he apparently assumed was his by dint of mere pedigree. At times he seemed barely in control of his anger; perhaps he truly cannot remember doing what he has been accused of. Nevertheless, his reaction to questions about his drinking habits from Minnesota Senator Amy Klobuchar—“What about you, Senator? Do you ever black out?”—was not just disrespectful but disturbing, and his apology for it devoid of real contrition. Though he loudly proclaimed his innocence, he repeatedly declined to say whether he would support additional investigation by the FBI into the allegations against him. Kavanaugh’s belligerence had a contagious effect on Republican members, stirring Lindsey Graham to preposterous expressions of indignation on the nominee’s behalf. Rachel Mitchell, the Arizona sex-crimes prosecutor Republican senators chose to question Ford in their place, was sidelined soon after Kavanaugh was sworn in; to him, they preferred to speak man to man, fanning his anger with their own.

His record suggests hostility toward voting rights and affirmative action, and his originalist stance on Constitutional interpretation seems fully in line with conservative aims to dismantle government programs and further deregulate the economy
sharetweet

There were reasons to oppose Kavanaugh’s elevation to the Supreme Court even before allegations of misconduct came to light. His record suggests hostility toward voting rights and affirmative action, and his originalist stance on Constitutional interpretation seems fully in line with conservative aims to dismantle government programs and further deregulate the economy. His writings suggest an expansive view of executive power—troubling especially now, given the current president’s musings on self-pardon and threats to end the investigation into Russian interference with the 2016 election. Kavanaugh’s time as a Republican party operative—from his role in drafting the 1998 Starr Report, which laid out grounds for impeaching President Bill Clinton, to helping stop the Florida recount in the 2000 presidential election—raises legitimate questions about his impartiality. He seems to have been less than fully truthful in sworn testimony about his knowledge of documents stolen from Democrats when he worked in the George W. Bush administration.

But Kavanaugh’s performance on September 27—intemperate, partisan, possibly perjurious, and plainly injudicious—was disqualifying. Humility, self-awareness, and acknowledgment of the gravity of the moment might have helped. Indeed, these are the qualities traditionally associated with a Supreme Court justice. Instead there was a diatribe filled with Fox News talking points, a threat to potential political opponents, and dissembling on a number of questions about his past behavior. The compromise brokered by Senators Jeff Flake and Chris Coons to have the FBI further investigate sexual misconduct allegations against Kavanaugh may neither fully exonerate him nor conclusively prove his guilt. Its somewhat limited scope seems intended to enable Republicans to deliver on their oft-stated goal to “plow through on this” before the midterm elections. Clearly, they do not want to know what happened. If Kavanaugh is confirmed, there will be a cloud over the court. Indifference to truth—exemplified by the president and now spreading through his whole party—will have carried the day, while a man who has proved himself unsuited to serve will be on the nation’s highest court for the rest of his life.