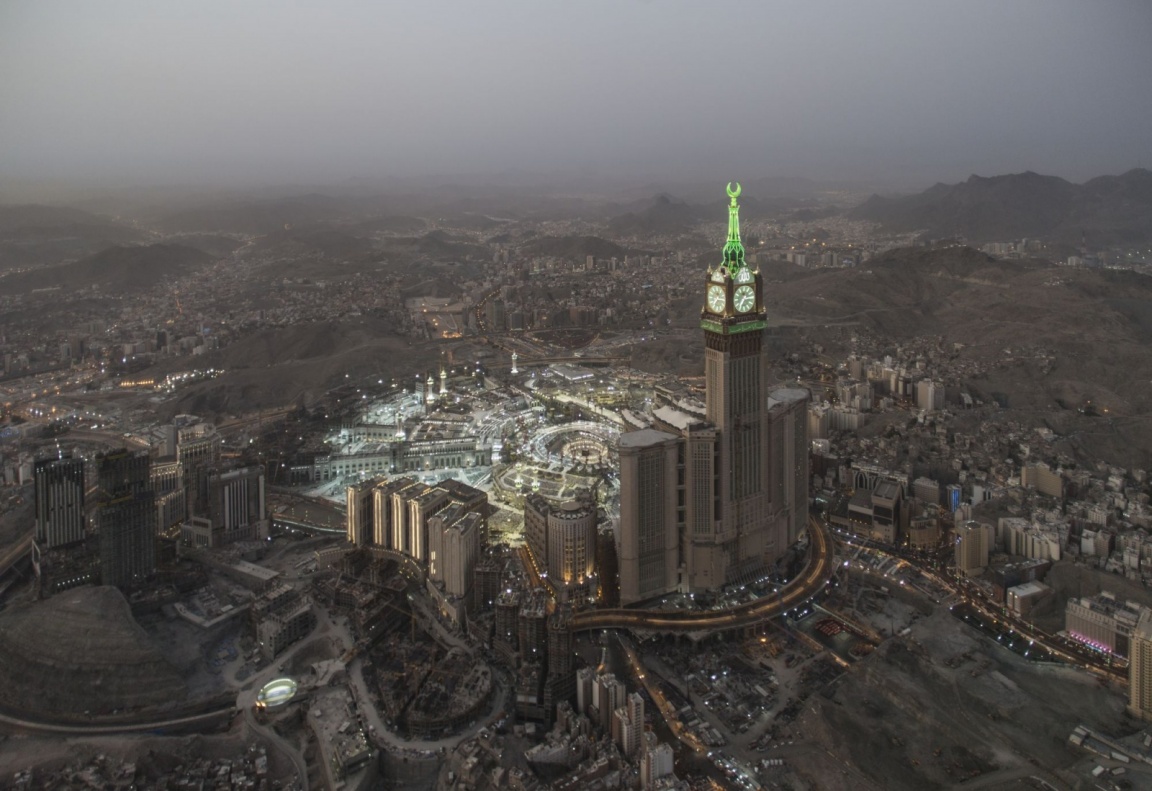 Part of a visual pilgrimage toward Easter, this piece is the fifth in a series of spiritual meditations by Griffin Oleynick, who will visit a different art gallery each week through the season of Lent. Catch up on past installments here.

In the 16th-century spiritual classic Ascent of Mt. Carmel, the Spanish mystic and Carmelite friar St. John of the Cross warns readers that if they want to know God, they must travel by an unknown path. Even the most sincere seekers, afraid of losing control over their inner lives, often succumb to the temptation of mapping the contours of their prayer in advance. As a remedy John counsels radical obedience to the will of God (the same attitude adopted by Jesus, as Paul’s Letter to the Hebrews reminds us this Fifth Sunday of Lent), which entails abandoning all preconceptions concerning the shape and destination of one’s spiritual journey. This willful vulnerability prepares us for pilgrimage, where God alone reveals the way we are to walk.

John would have been hard pressed to find a better student than Ahmed Mater, the Saudi-born artist whose new exhibit, Mecca Journeys, brings us inside the rapidly changing cityscape of one of the world’s great pilgrimage destinations. On view at the Brooklyn Museum through April 8, Mater’s multimedia show uses photography, large-scale video, and sculptural installations to document Mecca’s unprecedented urban renewal, which has completely reshaped the spiritual home of the world’s 1.8 billion Muslims in the short space of a single decade.

With as many as 3 million pilgrims now arriving in Mecca during the annual hajj, the Saudi government has encouraged massive infrastructure and hotel construction to accommodate the increase in traffic. These developments have greatly accelerated since the 1970s, with 95 percent of the city’s historic sites and more than 400 historically significant buildings disappearing in that time (the scale of demolition is reflected in the seal of the municipal government, which prominently features the image of a bulldozer). Much of the cost has been borne by the city’s poorest residents, whose neighborhoods are systematically leveled and replaced with blocks of expensive towers, pushing them further into the shadows. Mater approaches these dynamics critically, but tempers his observations with a degree of humility and inquisitiveness that invites viewers to ponder slowly and draw their own conclusions. 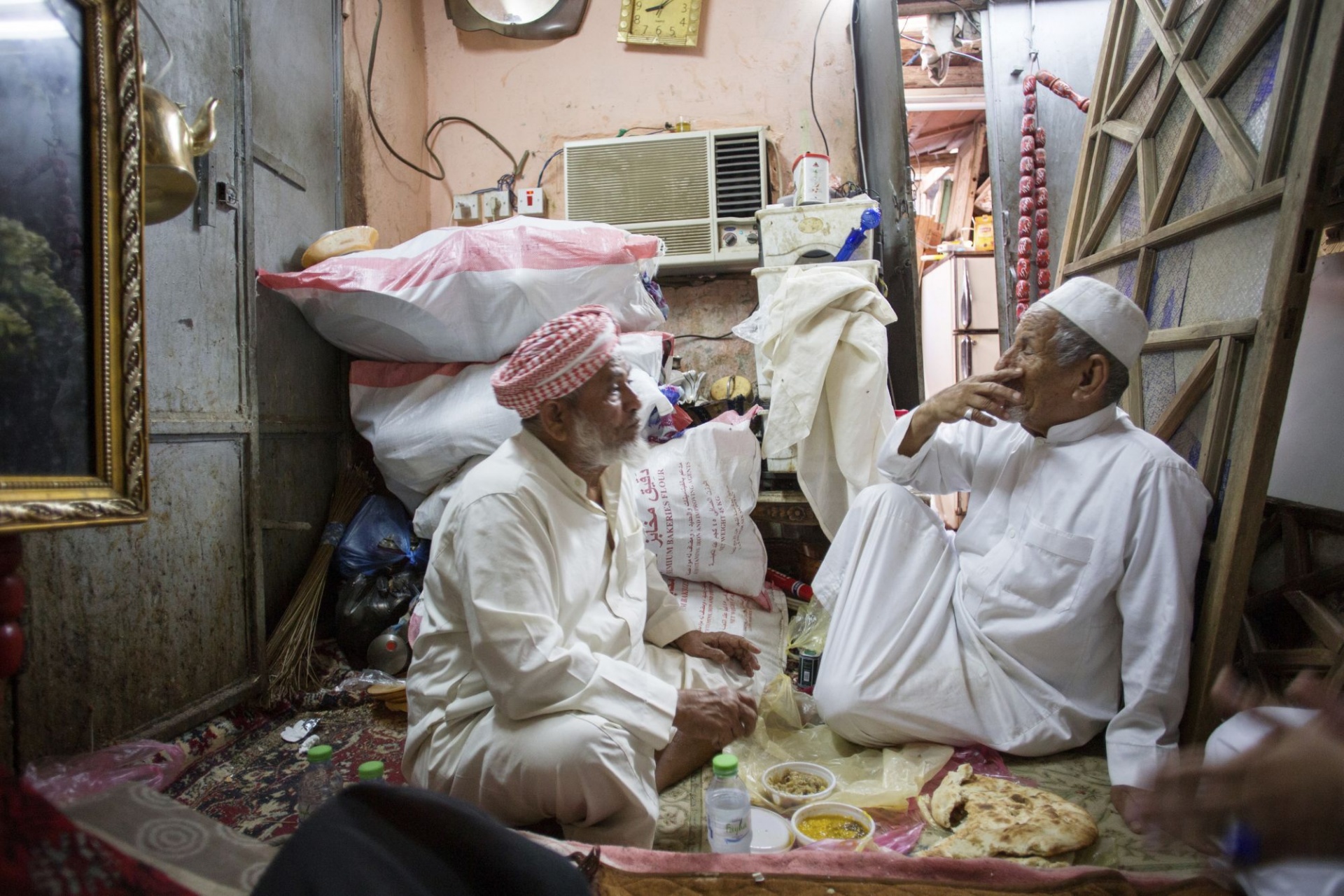 Originally trained as a medical doctor, Mater became interested in art while practicing community medicine in Saudi Arabia. As he writes in a series of reflections displayed throughout the exhibit, treating patients in a communal context gave him a broader, more holistic understanding of health—one that expands beyond the biological well-being of individuals to embrace the complex social, environmental, and spiritual components of life. Mater’s art becomes an extension of his earlier medical work, enhanced by the perspective of faith: photographing the inhabitants and structures of the holy city enables him to assess the effects of Mecca’s transformation on the collective mental, physical, and spiritual health of the Islamic ummah, the global community of believers. Inspired by the idea of “psychogeography,” or “rudderless urban motion as a form of self-expression,” Mater roves casually about the city and the surrounding desert—on foot, by car, even by helicopter—always with a creative openness to chance encounters.

Among the most compelling results of such meanderings are Mater’s warm, intimate portraits of two groups typically excluded from official narratives of the Mecca pilgrimage: the community of Burmese Muslim refugees (known as the Rohingya) who inhabit the city’s vast illegal slums, and the international corps of migrant workers hired by the Saudi government to construct the city’s colossal new buildings. Both groups live in grinding poverty on the margins of the city, surviving amidst scenes of destitution that we hardly ever see depicted in Western media. In the slums we find narrow unpaved streets, strewn with rubble and lined with precariously unfinished buildings; in the cramped workers’ quarters, we see ten men from different countries sharing bunks in a single room.

Looking past the hardships of their surroundings, Mater deliberately places human beings at the center of his shots, foregrounding their dignity and enabling them to control their own space. Thus a graffitied wall becomes a colorful stage where smiling children brag and tease each other, while an immense, dusty crater on a hillside serves as a makeshift soccer field for a group of teens. Mater also documents people engaged in everyday activities like cooking and sharing meals, the candid images revealing the trust they in turn have in the artist.

But Mater also zooms out, in a range of monumental photos and videos dominated by architecture and crowds. Here he captures the surreal spectacle of hundreds of thousands of pilgrims walking in procession over specially designed bridges, ramps, and air-conditioned tunnels that resemble highways, parking garages, and shopping malls. He likewise frames shots of the black-and-gold Kaaba, the holiest site of Islam located at the center of the Sacred Mosque, surrounded by a forest of soaring yellow and red construction cranes, thereby highlighting the contrast between the sacred and mundane.

Other shots are anchored by the recently completed Royal Clock Tower, an enormous hotel for the wealthy built on the ruins of an 18th-century Ottoman citadel (whose destruction was vociferously protested by Turkey in 2002). Now the third-tallest building in the world, the Clock Tower becomes in Mater’s photos a potent emblem of hyper-modern Mecca, which obliterates the past and orients the entire city toward an unknown, still-unfolding future. One haunting shot, taken at night, shows its glittering green-and-gold spire looming ominously above a shadowy slum. To the left of the frame in the foreground, we find a single sitting child who stares questioningly back at us. Mater thus renders a clear judgment on the new construction: the capitalist socio-economic forces remaking Mecca tragically betray the ethos of peace, equality, and brotherhood that lie at the heart of Islam.

Mater is much more sympathetic to the tradition of the hajj itself, bringing visitors into the core of the pilgrimage experience through an immersive combination of video and sculpture. One short film, projected in a dark hallway, leads us along a desert road into the city center, where we are met by a teeming crowd of pilgrims. The cacophony of car horns amid snarled traffic induces a sense of disorientation, hardly the peace and tranquility that we expect from a spiritual experience. Another video shows pilgrims throwing pebbles at a pillar, a ritual rejection of evil that reenacts Abraham’s triumph over the devil. Here too we are overwhelmed by the chaotic energy of the crowd. Where then do we transcend such commotion and experience the stillness of prayer?

Placed intentionally between the two videos and installed by Mater himself we find a small, simple sculpture—a black magnetized cube circled by standing iron filings. The arrangement resembles the most well-known pictures of the hajj, where pilgrims, in a ritual display of unity before God, make seven counterclockwise circles around the Kaaba. The delicate, abstract beauty of the installation, together with its minimal, humble scale, exert a kind of magnetic pull on visitors, who themselves must stoop to see its details as they circle the sculpture. Mater thus ingeniously enables us to grasp the essence of the pilgrims’ journey: through the ancient, powerful rituals of the hajj, individual believers are drawn into a graceful, coordinated whole, moved only by the silent magnetism of God.

Mater’s understanding of pilgrimage, then, differs markedly from the way we typically tend to conceive of such journeys. It is not their unique, highly individualized quality that makes them meaningful, but rather the fact that when we go on pilgrimage we follow the steps of countless pilgrims before us. There is no longer any room for the selfish, lonely insistence on the distinct importance of “my journey.” Only when we are guided and accompanied by others do we participate in something wider than ourselves, transcending our particularities and reveling in our fundamental unity, our sameness before God.

In his book Desert of Pharan: Unofficial Histories behind the Mass Expansion of Mecca (upon which the Mecca Journeys exhibit is based), Mater writes that his work to document the city’s rapid changes has become something “more than art.” Instead it is “a prayer for Mecca,” and a kind of intercession for all cities across the world as they experience “drastic modifications” and “head full speed in a direction to which we are not privy.” This Lent, Mater’s exhibition challenges us to scrutinize our own cities: in what ways are they changing, and for whom are they being built? Do their structures tend to facilitate or destroy human fellowship? How do they care for the poorest of their inhabitants? As we near the end of our pilgrimage toward Easter, we must honestly ask ourselves whether our own actions are helping to transform our imperfect cities of man into the glorious City of God.