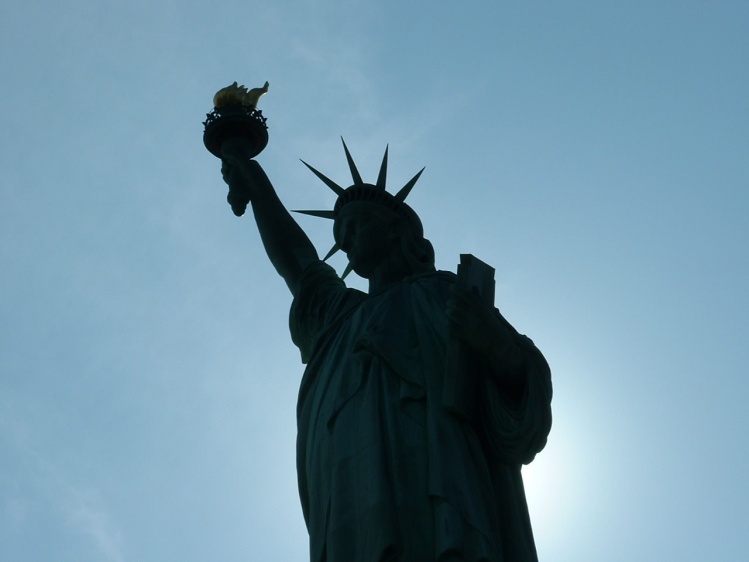 Often, in the morning, I walk briskly for an hour on the esplanade on the Hudson River in lower Manhattan. Unless there is ice or fog, I gaze at the Statue of Liberty. While I admire the returning geese, the bumptious ducks, and the stately gulls, I love the statue and what she represents. Even though Lady Liberty may be inanimate, a fusion of bronze and steel, I have always believed that love was reciprocal.

Like most Americans, my family came from some other place. I was born in Antwerp, Belgium in 1939. One week before my first birthday, at 3 a.m. on May 10, 1940, our street was bombed by the Luftwaffe as part of the surprise invasion that launched the Second World War. A few hours earlier, my parents had entertained some friends and the silverware and coffee service was still sprawled on the dining-room table. Approximately a million Belgians tried to escape the detonations and crumbling buildings that night. My parents’ flight was complicated by my infancy, but made possible because they owned an American Buick—a rare possession in European cities at that time but one they considered a prudent investment in the threatening political atmosphere of the late 1930s.

My father, a diamond merchant who could secure most of his assets in his pockets, drove his parents, my mother, and me to the south of France, seeking accommodation where they could in the awful chaos of desperate circumstances. For my parents, it was oysters on the run if that was all that was available, or a sleeping space in a brothel on more than one night. For their swaddled child, “ti Jean” as I was called, it was a time of perpetual colic and crying.

We bribed our way here, our entry as tainted as that of anyone paying a smuggler to cross the Mexican border
sharetweet

My parents were not planning for migration; they intended to return to Antwerp as soon as possible. My father read the newspapers and the news was grim, the future foreboding. So he drove us through Spain where bullets fired by Franco’s supporters nicked the car. My father kept driving until we reached Lisbon, where my family spent the next six months uncertain about their future. My mother had been born in London—another accident of war—so we could have gone to England. But the Germans had begun bombing civilian areas in Britain, so that hardly seemed like a sensible option. All of Europe, it seemed then, was about to succumb to the domination of madmen bent on the annihilation of those they saw as racially impure.

As secular European Jews, my parents had great reason to fear. The United States seemed like a possible haven. The problem was “No Jews Allowed!” in the Land of the Free, a policy formed by the fear that America might not have space for millions of impoverished Jews from the shtetls of Poland and Russia. So parts of my family ended up in Rio, Buenos Aires, Havana, Tokyo, and Melbourne. I was one of the fortunate few allowed to grow up in New York City. Later, when I asked my parents why we were allowed to come, despite our Jewish origins, my father explained that he had traded some of his remaining diamonds to an official in the American Embassy in exchange for a visa. Apparently, a number of other diamond people from Antwerp benefited from this corrupt bargain and established a diamond exchange on West Forty-Seventh Street in Manhattan—previously, the fledgling trade had been located on Canal Street near the Manhattan Bridge, where remnants of it still remain. We had bribed our way here, and although we were eventually naturalized, our original entry was as tainted as that of anyone paying a smuggler to cross the Mexican border in the middle of the night.

From my perspective, legality is relative, as fluid as the stream of historical change, and determined by those in power. What is at issue here is not the legal right to live in a particular place, but the human right to live at all, especially when one is driven from home by devastating forces. The law is not sacrosanct or absolute, but as subject to change as anything else. The most cursory examination of our past will reveal our blatant legal inconsistencies: kidnapped Africans could be purchased as property before the Civil War and then forced to live under the apartheid “separate but equal” doctrine for a century after it; Prohibition could suddenly reverse three thousand years of universal custom (and incidentally create a new criminal class).

My small history, I know, was easier than for some of the people seeking sanctuary here now: in my kitchen recently, my carpenter, a stout man with good hands from Uzbekistan, explained to me that when he overstayed his tourist visa he was incarcerated for four months in a federal facility until a judge determined he could be set free. Russlan has a family and has been working here and paying taxes for eleven years. And, equally “illegal” when I arrived in this country, I have been working at the same place for fifty-five years, every two weeks receiving a check in compensation for my efforts from the State of New York. Would the quality of my work have been improved or been more reputable had I been born in Manhattan?

John Tytell is best known as the author of Naked Angels: the Lives and Literature of the Beat Generation, Ezra Pound: The Solitary Volcano, and seven other works of non-fiction. He is a founding editor of American Book Review, and has taught modern American literature at Queens College (CUNY) since 1963.