I Don’t Feel Your Pain 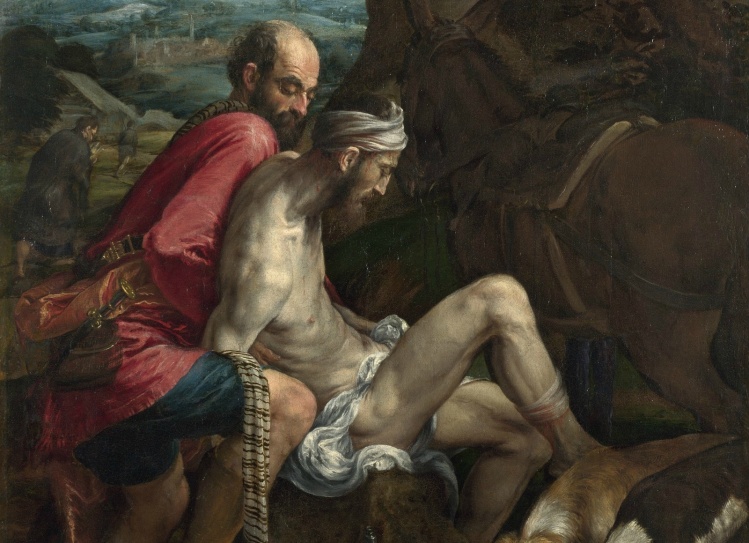 Jacopo Bassano, The Good Samaritan, circa 1562

Paul Bloom, professor of psychology and cognitive sciences at Yale, has written a thoughtful criticism of the widespread assumption that we can improve the world by increasing our empathy. In his farewell address, for example, President Barack Obama said that empathy for those who are different is an essential pillar of democracy. Political polarization could be reduced if Republicans and Democrats had more empathy for one another. Teachers, psychologists, and politicians suggest that lack of empathy lies behind complacency toward Native Americans, judgmentalism toward opioid addicts, and hostility toward immigrants. If we felt the pain of the afflicted, it is often assumed, we would want to take proactive steps to help them.

Bloom doubts it. He rejects the assumption that empathy is either a strong motivator of moral goodness or a proper guide to moral decision making. One can identify emotionally with the suffering of others but not do anything about it; conversely, one can offer effective assistance to another person without echoing his or her internal states.

Bloom goes even further in arguing that empathy is actually responsible for more harm than good. A wide array of studies in social psychology and neuroscience show that empathy is highly context sensitive, shortsighted, mood dependent, narrowly focused, biased, and parochial. People who want to alleviate their “empathic distress” can simply remove themselves rather than help the victim they are empathizing with. We are much more prone to feel empathically toward someone whom we perceive to be like us than with strangers. Empathy functions like a spotlight that calls our attention to particular people but leaves others outside our empathic engagement. Intense empathy for members of one’s own group is perfectly consistent with aggression toward those we don’t know or who are unlike us.

Bloom’s own normative moral perspective is rather eclectic. He attacks empathy but values compassionate caring for those who suffer. But he wants rational compassion: utilitarian “effective altruism” is a policy of always acting in ways that maximizes the well-being of the greatest number of people possible. Bloom does not talk about the well-known limits of our capacity accurately to predict the consequences of our actions under complex circumstances over extended stretches of time and place. In any case, he confesses that in real life we have to use common sense rather than consistently apply an impartial cost-benefit analysis of possible courses of action. He shifts from what psychologists call System 2 thinking (conscious, rational, deliberative, slow) to System 1 thinking (quick, unconscious, intuitive, fast) without offering any principled account of when or why one ought to take priority over the other. This puts him in the awkward position of implying, for example, that acting as a good parent (say, paying for your child’s violin lessons) makes you a bad person (because family priority violates the requirements of impartial beneficence), and vice versa. Bloom’s desire to avoid fanaticism is laudable, but in the end he is left saying that he has adopted utilitarianism because it is intuitively correct to him...except when it is not.

Feeling what others feel can be one possible source of moral insight, but it cannot do anywhere near all the work of moral reflection—indeed, our ability to resonate affectively with another person is not itself deliberative.

Bloom’s assessment of the weakness and dangers of empathy resonates with much of the Catholic moral tradition. For example, the golden rule—treating another person the way we would want to be treated—in no way depends on one’s intuitive ability to feel what the other is feeling. What Augustine said about love, amor, can be applied to empathy. Empathy is a human capacity that can serve good or evil, and that can be exercised wisely or foolishly, so it has to be properly developed, trained, and ordered by reason. The proper moral significance of empathy can only be attained when put in the context of an overarching commitment to justice, the virtue that requires us to consider the goods and harms done to individuals in light of the common good. Justice for both Bloom and Aquinas incorporates a kind of impartiality that puts particular loyalties in proper perspective and works to correct the worst effects of our unconscious biases. Justice, for example, forbids a parent from unjustly harming a third party out of empathic concern for his or her child.

Thomists would insist to Bloom that the virtue of prudence has the first rank among the cardinal virtues. Practical wisdom enables us to determine how reason ought to put proper form into the raw material of our feelings. This is not to downplay the real significance of empathy or other feelings, but it is to deny their ethical primacy. If we are unmoved by the suffering of others, we lack mercy, misericordia; yet if we try to address the suffering we encounter unintelligently or unreasonably, then our actions will likely increase rather than decrease misery.

So Bloom is right to point out that compassionate acts are often not preceded by empathy. The good Samaritan was moved by the victim’s sorry state, but there is no reason to think he felt anything like what the victim would have felt lying on the side of the road. What was important was the Samaritan’s good will and good judgment about how to help the poor man. More generally, the point is that we do not have to feel any particular way in order to do what is right in any given situation. What is essential, as Thomas Aquinas put it, is a “constant and firm will to give each his or her due.”

Bloom provides a lot of helpful information for those of us who want to conceive of the good life as one centered on exercising the virtues. Leading ethically mature and balanced lives requires us to exercise not just one or two but a wide array of virtues. Compassion without courage, for example, wilts in the face of opposition. The person who is temperamentally compassionate but lacks the virtue of temperance will satisfy desires in ways that inevitably leave other people with the short end of the stick. To speak of goodness in terms of virtues goes well beyond what Bloom attempts in his book though not entirely outside the realm of the human sciences. It requires an account of character-training, virtue-forming practices, and communities of conscience. Because he does not distinguish between the raw capacity for empathy and its habituation in various character traits, Bloom fails to appreciate ways in which our empathic capacities can be developed, extended, and reordered by imitating those who possess such virtues, participating in liturgies, following the guidance of wise moral authorities, and leading examined and self-directed lives. Moral conversion is not on his psychological map.

This is a cleanly written and interesting book. Its provocative character comes from Bloom’s unusual use of the term “empathy.” Most people think of empathy as another word for all-purpose caring or compassion, but, as we have seen, he uses it in a much narrower sense. But readers can rightly wonder whether anyone actually believes that feeling what others feel is absolutely necessary, let alone sufficient, for either moral goodness or wise moral decision making.

Stephen Pope is Professor of Theological Ethics at Boston College.