How Can We Stay? 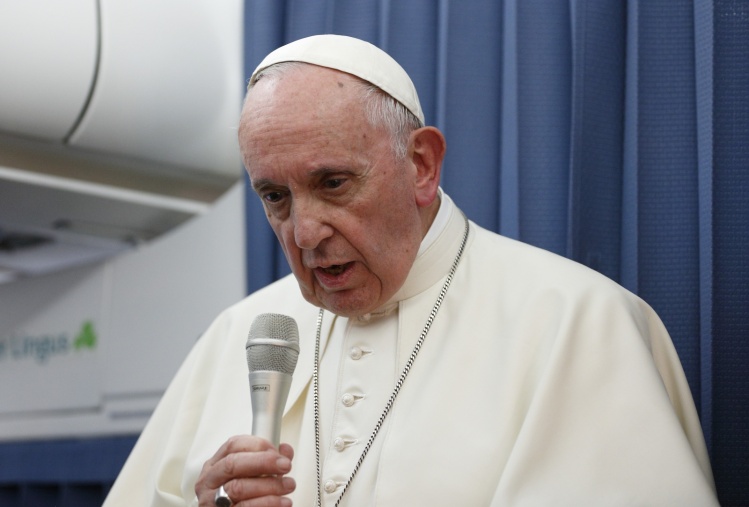 Pope Francis responds to a question about Archbishop Viganò aboard his flight from Dublin to Rome Aug. 26 (CNS photo/Paul Haring)

The major disgrace of America’s Catholic bishops was to foster a culture in which priests sexually assaulted children and were then sent on to new duties as their ungodly behavior was covered up.

There is also a second failure. Thanks to the bishops, who are supposed to strengthen the faith, Catholics are now regularly asked: “How can you be a Catholic?” And, even more pointedly, “How can you stay?”

This summer, these questions became much harder to answer.

This is about the institution, not about whether to be a Christian. Christianity heroically preaches a devotion to the poor and the marginalized, and the abusive priests often preyed on the most vulnerable and least advantaged children. As a dear friend who no longer thinks of herself as part of the church noted, these reprehensible acts turned Christianity on its head.

It’s fair to ask why church-going Catholics, myself included, were so shaken by the scathing report from a Pennsylvania grand jury and the revelation of the abuses by former Cardinal Theodore E. McCarrick. After all, since the 1980s and 1990s, we have known a great deal about the church’s malfeasance and yet we held on.

The sickening catalogue of pure evil in Pennsylvania is certainly part of the answer. And McCarrick’s admirers were at first shocked and then horrified over his betrayal.

Defenders of the church note that the bishops’ 2002 reforms dealing with abusive priests, though imperfect, made a difference. It appears that all but two of the cases described in the Pennsylvania report predate the policy changes, although we may learn of more as victims feel newly empowered to report past transgressions.

On so many questions, from climate change to poverty, Pope Francis has been the fresh voice the church needed. But he was shamefully slow in facing the gravity of the abuse crisis.
sharetweet

But the sheer weight of the evidence brought home a reality that loyal Catholics who retain an appreciation of the good work the church has done must confront: the great missing piece in the church’s response was the failure of the hierarchy to atone—truly, deeply, credibly—for putting institutional self-protection over the interests of the young and the powerless who were harmed.

The leadership has resolutely avoided a searching inquiry into how the church’s culture and structure contributed to a catastrophic failure of accountability. A philosopher friend who has warm feelings for the church offered an insight that Catholics cannot avoid: “Hierarchy without transparency is tyranny.”

Patricia McGuire, the president of Trinity College in Washington, grasped the essential truth in a July essay written after the McCarrick revelations but before the grand jury accounting. “The utter lack of a truly empathetic acknowledgment of the victims,” she wrote, “and those who truly love the victims, those who also suffer because of the abuse –their mothers and fathers and all in the universe afflicted by these grave sins—this is the most fundamental problem the Church has yet to address in a satisfactory way.”

She pointed to the church’s “sad history of sometimes rendering unequivocally harsh judgment against those who violate even minor rules while looking the other way when its own ordained leaders violate the most sacred and profound rules about human conduct and respect for human dignity.”

On so many questions, from climate change to poverty, Pope Francis has been the fresh voice the church needed. But he was shamefully slow in facing the gravity of the abuse crisis. His statements acknowledging the church’s culpability, last week and over the weekend on a visit to Ireland, were at best a first step.

Now, his papacy is under threat. Conservative commentators and prelates long hostile to Francis are focusing their attacks on the pope and progressive bishops while ignoring the failures of their conservative episcopal allies and Francis’s predecessors. The campaign reached a crescendo with the release of a letter from ultra-traditionalist Archbishop Carlo Maria Viganò charging that Francis long knew of the allegations against McCarrick.

Exploiting what is a blight on the entire church to make a play for power is a further affront to the innocents who have suffered. But the descent into factional politics only underscores the high costs of the church’s long-term default.

I could detail the reasons for my personal gratitude to the church, list the devoted people I know—especially nuns and lay women—who carry out missions of mercy, and argue that its core teachings about our obligations to each other remain urgent in our wounded world.

But like many at this moment, I am struggling, wondering if the church can meet its own obligations—to those it injured wantonly above all, and to the faithful who are still in search of a compelling answer when they are asked: “How can you stay?”

Partisanship with a Purpose